Women MPs in bitter fight over Ruto and Raila 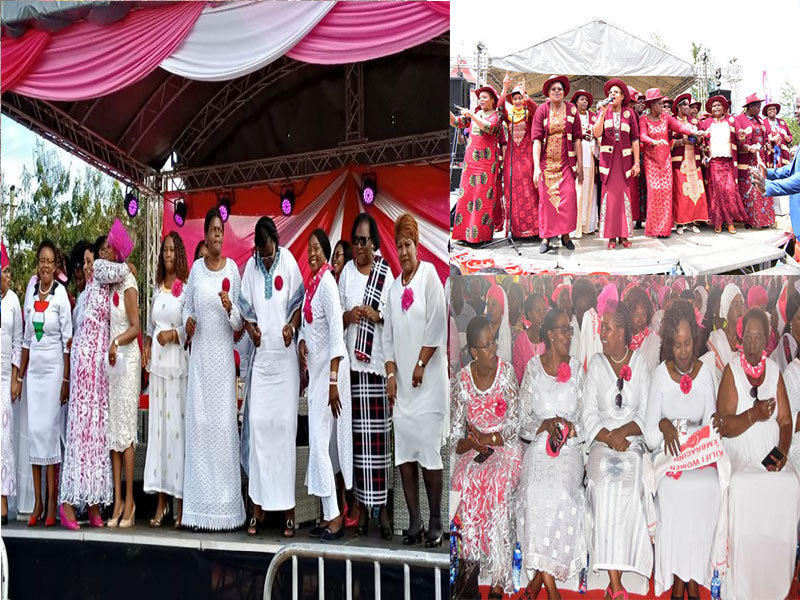 The bruising battle that is already shaping up between the different political factions has split women political leaders down the middle.

What started as routine political games involving women in different political persuasions have slowly degenerated into personalised attacks, where members are going for each other’s jugular at the behest of the male leaders.

Political excursions, mostly happening during weekends, have provided the women from the different political groupings with a platform to tear at each other with vengeance. The groups are fast normalising gender stereotypes, complete with phallocentric memes and rhymes for their perceived opponents.

Already, two women political groupings - Team Embrace and Inua Mama - pitting supporters of President Uhuru Kenyatta and Opposition leader Raila Odinga on one hand, and the other supporting Deputy President William Ruto have emerged. The groups draw members across the political divide and have been spoiling for a fight at public forums, the latest being the recently-concluded Kibra by-election where ODM candidate Imran Okoth triumphed over Jubilee’s McDonald Mariga.

Narc-Kenya leader Martha Karua recently lashed out at Inua Mama and Team Embrace, branding them “a group of praise singers for the country’s leadership”.  Karua is among the women leaders who steadfastly fought for pluralism in the early 1990s.

“The most unfortunate thing happening now in the Kenyan political space is women parliamentarians agreeing to become praise choirs for male politicians angling to succeed the current president,” said Karua during a convention in Addis Ababa, Ethiopia, in reference to the two groupings.

Karua observed that by agreeing to be “cheer leaders” of their male counterparts, the female politicians are doing a disservice to fellow women.

For the past few months, personalised attacks pitting women leaders have muddied the local political scene with re-alignments taking shape as the clock ticks towards the 2022 elections. From private family issues, grooming and ethnicity to widespread general odium, there’s no taboo topic in this race down the gutter.

An MP who could not be quoted for fear of attacks by the two groups said: “It’s like they are in a rush to overtake men in the race down the cesspool of political nastiness.”

This past weekend at an Inua Mama rally in Uasin Gishu, Laikipia Woman Rep Cate Waruguru was caught on tape hurling unprintable words at Kirinyaga Governor Anne Waiguru, a proponent of the yet-to-be published Building Bridges Initiative (BBI) report. Waruguru talked of the recent marital union between Waiguru and lawyer Kamotho Waiganjo in a tirade of offensives.

“We have a woman who has not given birth after her recent marriage, but she’s busy telling us to await the birth of the BBI report,” Waruguru told the weekend rally.

She further ridiculed Waiguru for imposing herself as “spokesperson for Mt Kenya region”.

“Don’t think because Jubilee assisted you to be the first woman governor in the region that you are now Wangu wa Makeri (the only female Kikuyu chief during the colonial era),” the MP went on.

The MP seems to have been ridiculing Waiguru who had taken to her social media accounts to mock those who were opposed to ODM’s victory in Kibra (read Ruto supporters).

Waiguru said the election of Imran Okoth was a sign that Kibra people were honouring the handshake between Uhuru and Raila.

“Vitu kwa ground ni different (the reality on the ground is different). Long live handshake, forward on to BBI,” she tweeted after Okoth’s victory.

Garissa Woman Representative Anab Subow, who calls herself Mama Ruto, has also been on the spot for making disparaging remarks against Raila. In a video clip that has gone viral, she described the ODM leader in a deprecating manner.

“We will dispatch Raila to Bondo where his true bedroom is,” she said at an Inua Mama rally in Uasin Gishu recently.

To Isiolo Woman Rep, Rehema Jaldesa, BBI is a means to Beba Baba Ikulu. “We are tired of being lied to, the handshake was all about someone getting to power through the backdoor,” she said at the Inua Mama rally.

They seemed to have picked up the BBI cue from where Uasin Gishu Woman Rep Gladys Shollei left during the Inua Mama rally in Kajiado.

“There is nothing like inclusivity in the BBI. It is just a plan to include a few people who have lost elections or extend terms for others to remain in leadership,” she told the rally in Kajiado.

On the other hand, Suba North MP Millie Odhiambo was on overdrive explaining how ODM triumphed in Kibra and how the party taught Ruto and his team a political lesson. She did not mince words attacking the supporters of what she referred to as Jubilee B, which includes fellow women who were campaigning for the party candidate.

“Hao watu wa Jubilee B walikuwa wanaongea ati wanataka kuingia bedroom ya baba, hao tulimalizana nao kwa sitting room... (These people in Jubilee B were bragging that they want to get into the bedroom, but we were done with them in the sitting room),” Millie said in her analogy of what transpired in Kibra against the Ruto team.

Homa Bay Woman Representative Gladys Wanga was also on the offensive during a meeting in Garissa.

“There is a leader from Garissa who told some of us that we are not his wives. I want to tell him I’m not looking for a husband. I have one who is enough for me. But let him know that we cannot be cowed,” Wanga told an Embrace rally in Garissa.

Likoni MP Mishi Mboko dared the Inua Mama group to a political duel, saying the result can only be a win by the Embrace Team. “We are telling our sisters on the other side that we are no pushovers, let them dare us and see that we are not cowards,” said Mboko.

Yesterday, Kandara MP Alice Wahome, who is the chairperson of Inua Mama Group, defended the women leaders against accusation of picking up bad habits from their male colleagues. She said “all these things are as a result of this thing called BBI”.

“You see all these divisions are brought about by this confusion from BBI. And men started these exchanges, why would women remain silent when they are insulted. All we are calling for is mutual respect,” said Wahome.

Kibwezi East MP Jessica Mbalu (Wiper) criticised the current situation, saying there is one family called women, and blamed the tensions on the failure to enact the two-thirds gender principle as stipulated in the Constitution which has seen women fighting for space with male politicians.

“There are divisions and it’s not healthy. Women leaders should be one, but there is freedom to associate with various political parties. They should speak for women,” she said.

She, however, cautioned that it is too early to take position ahead of 2022 General Election.

“We are stronger together when we speak in one voice. We will be respected more by the men. We are already voicing our concerns despite not positioning ourselves,” she noted.

Centre for Multiparty Democracy (CMD-Kenya) Executive Director Frankline Mukwanja said women have in the past been at the centre of major political milestones and asked the current women leaders not to lose focus.

“It is a pity that there is a brazen attempt to divide them. They need to forge a united front to have more of women in top leadership,” he said.

“It is, however, clear that they are choosing sides based on issues and not based on tribal affiliations,” he added.

Ngirici said women do not want to prematurely get involved in succession politics.