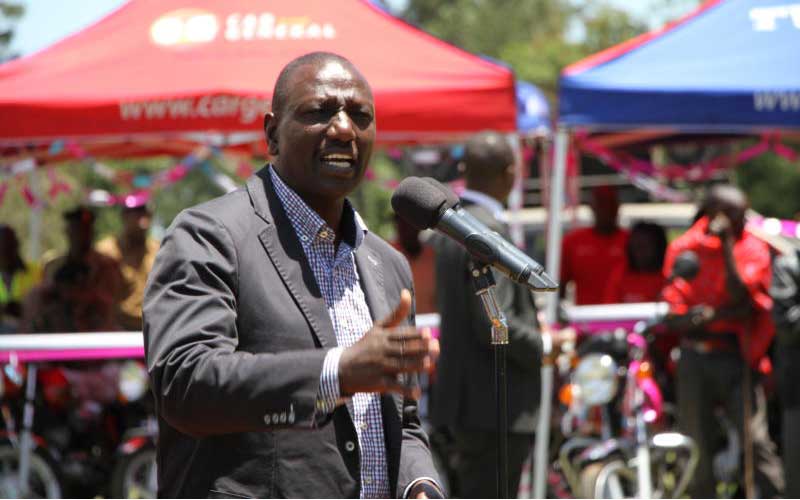 A group of MPs yesterday demanded a lifestyle audit on Deputy President William Ruto (pictured) and claimed that he is not supportive of the war against corruption.

Led by Lugari lawmaker, Ayub Savula the 10 MPs claimed that the DP has been frustrating the war on graft, being pushed by President Uhuru Kenyatta.

The MPs also defended Cotu Secretary General, Francis Atwoli on his recent remarks that the DP’s name will not be on the ballot in 2022.

“Lifestyle audit should be carried out on the DP based on his known income…he has assembled a team of Tanaga Tanga MPs to abuse the president, hence dividing his own jubilee party and a reason to why he should not be supported to be on the ballot

As far as we are concerned, Hon Atwoli is a senior Kenyan who expresses his views openly as it is within his democratic rights as enshrined in the constitution…” the statement read.

“The sentiments by Atwoli to the effect that Hon Ruto will not be on the ballot come 2022 are informed by the DP’s disrespect to President Uhuru as he is defiant on the war against corruption…” the MPs said in a statement read by Mr Savula.

On Monday, another group of eight MPs, led by Caleb Amisi (Saboti) came out to defend Mr Atwoli.

Yesterday’s group argued that those criticisms against the trade unionist are unfounded.

They claimed that the DP has waged a war against law enforcement agencies waging the anti-corruption war.

“The DP’s fight against the Directorate of Criminal Investigation (DCI) shows he is against the collective government effort to fight the vice and therefore not fit for the office of the president under chapter six of the constitution on integrity," the statement read.

By Abdimalik Ismail Hajir | 13 hours ago

By Steve Mkawale | 18 hours ago

By John S Shilitsa | 1 day ago