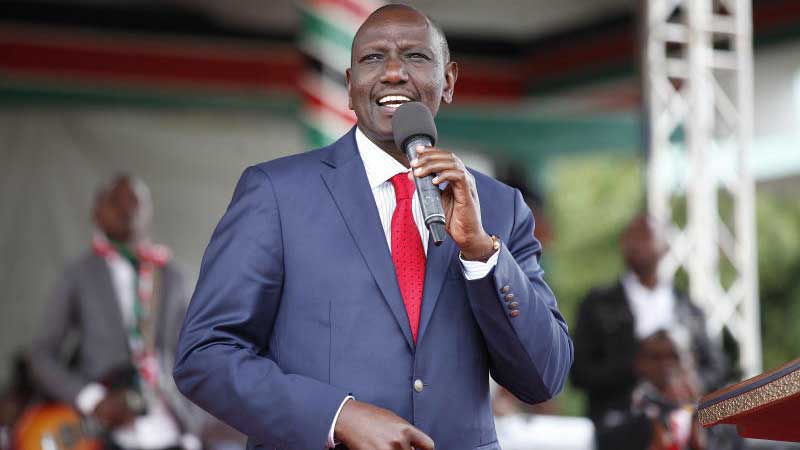 Deputy President William Ruto (pictured) has made an about turn on his opposition for a referendum to change the 2010 constitution. Ruto who until Saturday maintained the push was motivated by selfish interest now wants the question and date for the referendum set. The Deputy President said that those who lose this time round must accept defeat.

He added that he will support the agenda if it will ease the burden for Kenyans. “We have no problem with the referendum. Our problem is hypocrisy and conman-ship, to tell us the referendum was agreed during the handshake, you are lying to us,” he said. Ruto was speaking at fundraiser in Tharaka Nithi County and maintained he would oppose the changes it was to create a post for ODM leader Raila Odinga. The calls to change the constitution has been strongly advocated for by Ruto’s nemesis Raila Odinga, especially on the structure of government and over representation. “The push for a referendum is real and inevitable. Those working to scuttle the process are living in denial. It’s like the croaking of a frog that will not stop the cow from drinking water,” the former prime minister said in Migori County on Thursday.

SEE ALSO: Change ye first your ways and all the reforms you desire will come

“I am actually surprised that some people are opposed to constitutional changes. We must hold a referendum to seek people’s views on the quest to change the Constitution,” he added. The church and a host of legislators have also been drumming the beats and have since presented memoranda to the National Assembly on the issues they want amended. Some of the proposed changes West Mugirango MP Vincent Mogaka and his Ndia colleague George Kariuki seek to reduce the number of Cabinet secretaries from the current maximum of 22 to 12, and counties from the current 47 to 12. Thirdway Alliance party under 2017 presidential candidate Ekuru Aukot also wants the number of MPs reduced to 194, down from the current 416 members in both the National Assembly and Senate.

Evangelical Alliance of Kenya (EAK) clerics want the number of counties reduced and they be headed by a provincial governor. Tiaty MP William Kamket (Kanu) proposes creating the position of an executive prime minister as head of Government, scrapping the position of deputy president and establishing two deputy prime minister posts. The proposal further seeks to limit a president to a one seven-year term in office – from the current two five-year terms – and have the holder preside over ceremonial functions. This is a s Soy MP Caleb Kositany wants the Senate as well the positions of nominated MP and MCA scrapped to address the increased wage bill. Kiminini MP Chris Wamalwa that seeks to change the election date. His Bill proposes moving the General Election from the second Tuesday of August every fifth year to the third Monday of December. ODM leader Raila Odinga on the other hand has proposed the introduction of a three-tier system; a National Government, 14 regional blocks and 47 counties. More to follow.