Cabinet secretaries Henry Rotich and Adan Mohammed may have to fight for their survival in Cabinet as their names are adversely linked to the mercury-laden sugar imports.

If the National Assembly approves a report with adverse recommendations against them concerning the bad sugar, they could be forced to step aside.

Mr Rotich, the Treasury Cabinet secretary, is in trouble for opening a window for duty-free sugar imports that was abused by unscrupulous traders.

And Mr Adan, who was Trade CS at the time of the scandal, faces censure because a State agency that should have prevented an influx of contraband sugar failed in its duty.

The joint House committee that investigated the scandal has recommended immediate investigations against the two CSs, and if the report is approved by the House, it could trigger a series of events that could culminate in them having to step aside.

The MPs also want the Directorate of Criminal Investigations (DCI) and Ethics and Anti-Corruption Commission (EACC) to probe former Agriculture CS Willy Bett, currently Kenya’s High Commissioner to India, over his involvement in the sugar imports, some of which have been found to be unfit for human consumption.

In a report tabled in the House yesterday, the Joint Committee on Agriculture and Trade further recommended destruction of all sugar found unfit for human consumption.

Also to be investigated are the importers, wholesalers and millers dealing in contaminated sugar by State agencies with a view to prosecuting them. But the committee curiously failed to finger specifics sugar barons for further investigations.

Two samples of the impounded 1.3 million 50kg bags were found with mercury while another 837,244 bags were found to have failed standards for human consumption, meaning a huge chunk of the seized sugar would be condemned.

The committee co-chaired by Kanini Kega (Kieni) and his Mandera South counterpart Adan Haji, however expressed frustration from State agencies as the team attempted to verify the reports of mercury contamination.

The team said the University of Nairobi (UoN) and Kenya Plant Health Inspectorate Service (Kephis) – the independent testing agencies it contracted – were obstructed from carrying further tests to validate the findings.

“In the view of the findings submitted by the Government Chemist that two samples tested positive for mercury (Moi Airbase, Eastleigh... and Webuye West, Bungoma), and the obstruction of the University of Nairobi (UoN) and Kephis to validate the same finding through independent testing agencies, the relevant Government agencies should immediately conduct further investigations,” read the 58-page document.

The issue of mercury threatened to scuttle the report writing, with sources yesterday intimating to The Standard how members of the committee on Tuesday walked out on Kega and Haji at Panari Hotel where they had retreated to write the report.

The sources said the duo attempted to block the inclusion of mercury in the sugar but backed off when members walked out in protest, threatening to shoot down the report at the committee adoption stage.

The committee said Rotich provided a duty-free window that was abused by unscrupulous business people to flood the sugar market in the country in what has been cited as part of the problems that have crippled local millers.

“The relevant investigative agencies should investigate the Cabinet Secretary for the National Treasury to ascertain the circumstances under which the Gazette Notices No 4536, 9801, 9802 and 10149 were issued, leading to importation of the excess sugar into the country and evasion of tax,” recommends the report.

It said Adan should be probed immediately because Kenya Bureau of Standards (Kebs), which was under his docket, failed to block entry of the contraband sugar.

“Kebs should undertake a thorough review of its existing standards for sugar importation to provide that all sugar imported into the country is tested for presence of heavy metals prior to issuance of pre-verification of export certificate and certificates of conformity from the country of origin,” it read.

Bett has been indicted for recommending a waiver of duty for 14 campanies that imported sugar under Gazette Notice No 9802.

“The relevant agencies should investigate the then Cabinet Secretary, Ministry of Trade, Industry and Co-operatives under whose docket Kebs falls to establish the circumstances under which it failed to undertake adequate market surveillance to guarantee the safety and quality of sugar in the country.”

The former CS is said to have allegedly pushed the taxman to clear 71,040 metric tonnes imported by 14 companies after the duty-free window period expired.

Kenya Revenue Authority had told the committee the country lost Sh37 billion through tax evasion during the duty-free window. The team also recommended a ban on bulk sugar imports.

Representation of women on boards up but much needed
With women accounting for 50.1 percent of the continent’s population, their participation in all levels of economic activity should be in tandem with their contribution.
Opinion
By Catherine Muraga
1 day ago 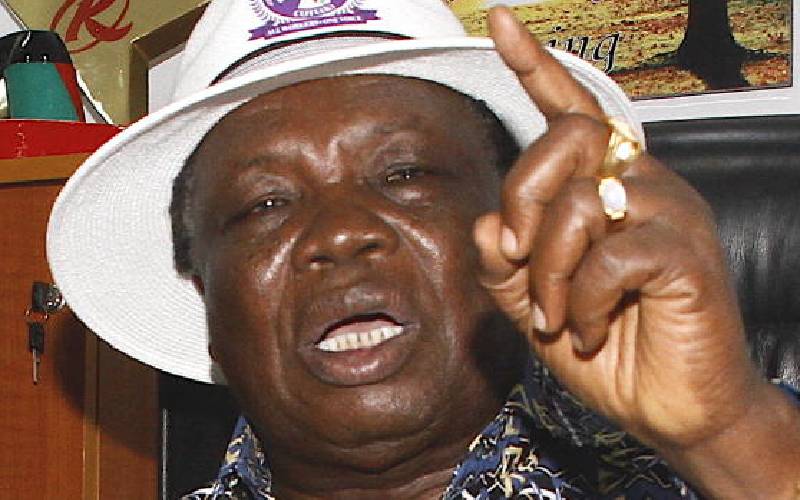 By Stephanie Wangari 3 4 hours ago
Ruto: I have no apologies over my Uhuru-slapping remarks

By Winfrey Owino 3 4 hours ago
Wahome: Forget running mate, Ruto will get all Mount Kenya votes