As prayer rallies kicked off on Saturday in Trans Nzoia for Ford Kenya leader Moses Wetang'ula whose political career looks to be on the edge, opinion is divided as to who are behind his woes.

A section of leaders from Western region have differed on claims that the Government, through its leaders from the region, has a hand in the political woes facing the Senate minority leader, who is also Bungoma senator.

Ford Kenya party officials have blamed some powerful leaders from the region for 'fixing' Mr Wetang'ula to take over leadership in the county.

"Senator Wetang'ula's political woes are as a result of a court case that was filed by Musikari Kombo contesting his senatorial seat on a NFK party ticket. That is the genesis of it," said Dr Simiyu.

But Musikari Kombo, who is a former cabinet minister, dismissed Simiyu's claims saying that he had nothing to do with the political problems facing the Bungoma senator.

Simiyu, who was among leaders who attended prayers held in Kitale, further blamed Water and Irrigation Cabinet Secretary Eugene Wamalwa for having a hand in the woes facing Wetang'ula.

"The DPP investigated and found nothing and by them proceeding to say that Wetang'ula's name should be deleted from the voters' registers is malicious," he said.

He also accused Moses Lukoye, a close ally of Bungoma Governor Kenneth Lusaka and NFK activist, of taking the matter to the Court of Appeal saying Wetang'ula did not go there by himself.

The Mumias East legislator said it was Wetang'ula himself who moved to court and applied for the suit that has turned against him.

Speaking at Khelela Pimary School in Bumula constituency yesterday during a fundraiser in aid of Khelela Hospital, Mr Jirongo said Opposition leaders play an integral role in any democratic country and urged the Jubilee administration to stop humiliating them for pointing out weaknesses in Government.

He urged Wetang'ula to leave CORD and join his United Democratic Party so that they can strategise and take the country's leadership in the next General Election.

"Let him join me in this tough journey as a united Western community so that we can invite our neighbours in the Rift Valley, those from the Coast and other regions to vote for us. A united family always prospers," Mr Jirongo said.

"CORD Co-principal Moses Wetang'ula is one of the fearless leaders and they should not instill fear in him by trying to delete his name from the voters register," said Jirongo.

A week ago, Senate Speaker Ekwe Ethuro gazetted the March 17 ruling of the Supreme Court indicting Wetang'ula for the electoral offence of bribery in the 2013 General Election.

Wetang'ula now awaits the verdict from IEBC, which might strike his name off the voters' register, complicating his political future as he may be barred from contesting any seat in the 2017 elections.

The country is spending over Sh200 million annually to treat victims of gender-based violence (GBV), according to the latest statistics. 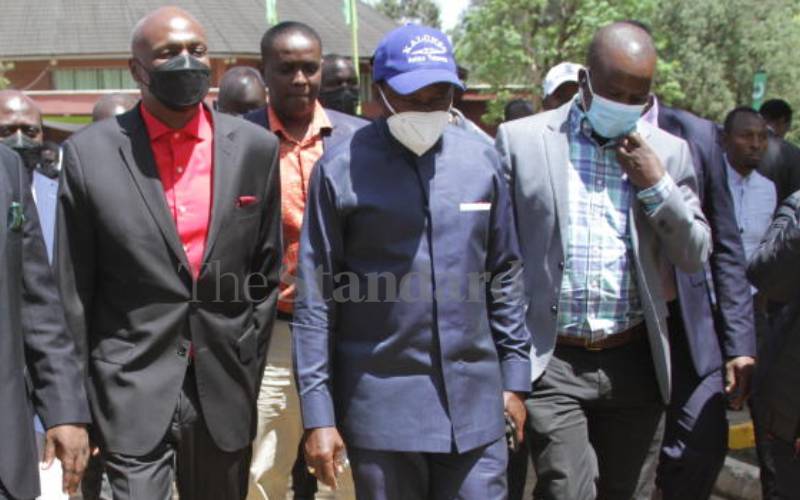 By Jacob Ngetich | 57 minutes ago