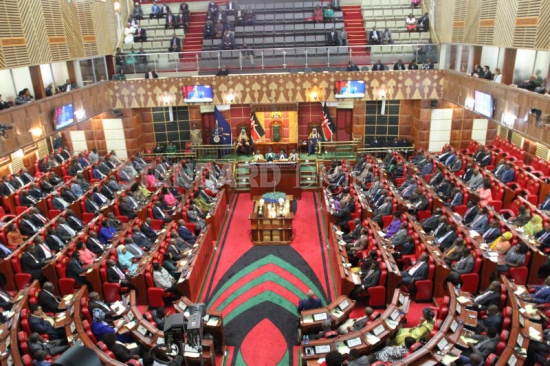 Stung by the huge number of their own in President Uhuru Kenyatta’s list of shame, MPs have mooted a plan to stop the list from being tabled in the House. The game plan is to raise legal and procedural queries, pile pressure on the Speakers of the two Houses and push them to declare the annex to the presidential reports as inadmissible.

If they fail – as is likely to be the case now that Cabinet Secretaries and other State officers have already stepped aside, thereby putting pressure on the rest of those in the secret list of shame to do so — then, the MPs said, they will make their displeasure known during the debate on the presidential speech.

But as they plot and scheme, Majority Leader of the National Assembly Aden Duale has poured cold water on the threats to derail the tabling and dismissed it as a “script by the governors”.

“Governors are not Members of Parliament. Who will stop me? What will they use? Just wait until Tuesday; I will table the report,” Duale told The Standard on Sunday.

The Motion before MPs will read: “That the thanks of the Senate/National Assembly be recorded for the exposition of public policy contained in the address of the President to Parliament on March 26, 2015”.

For the two annual reports submitted by the President — Annual Report to Parliament on the State of National Security and the report on measures taken and progress achieved in the realisation of national values and principles of governance — the MPs will just be required to ‘note’ the contents of the report. It is at this point that they plan to introduce an amendment to the Motion to expunge the list of shame which is an annex on the report on national values.

The MPs are taking comfort in the fact that they have at least once — on Thursday night — managed to intimidate the Speakers not to make the list public.

Insiders within the Senate and the National Assembly said the many questions about the legal loopholes, such as of making public a list of people under investigation without notice to the suspects; and the legal wisdom of a secretary of a constitutional commission sidestepping his bosses and secretly reporting to the President, will give them ample fodder to prosecute their case.

It is these scare tactics about the potential for litigation for breach of the law that they used on Speaker Justin Muturi (National Assembly) and Ekwe Ethuro (Senate) to ensure the report was under lock and key.

“In matters of this nature, where people are under investigation and the investigations are shown to be in various stages... since the affected persons are presumed innocent, I think it will be unfair for us to breach the procedures. We may find ourselves being cited in possible litigation; some of these may end up in court, and people will cite the Speakers for first breaching their own rules,” said Muturi.

The Speakers remained in Muturi’s office for close to three hours after the President left the precincts of the House, meeting MPs keen to know the big names on the list.

They said they had “really agonised” on whether to release the list, or wait until Tuesday, when they sit again, to have it tabled and earn parliamentary privilege.

“We were equally concerned, and had to go through soul-searching, and decide whether to abandon procedures or follow them. We decided that one thing we must demonstrate to the nation is that Parliament can obey its own procedures,” said Ethuro.

But the naysaying MPs say the EACC Act, Section 27(3), is clear on what the annual report of the EACC contains. They say there is no provision for a secret communication on the status of investigations, including names of suspects, between EACC secretary Halakhe Waqo and the President, or using the Head of State as a conduit for submitting information to the House.

The independence of the commission as stipulated in Section 28 says the Commission shall, in the performance of its functions, not be subjected to the direction or control of any person or authority. This is another bone the MPs have to pick with the presidential dossier.

Many of the MPs who spoke to The Standard on Sunday did not want to be quoted for fear of a political backlash — they say they will be seen as the faces of corruption — but insisted they were marshalling their troops to question the confidential list containing names of corruption suspects.

A Jubilee MP allied to the Deputy President said there was background canvassing to stop the respective Leaders of Majority Party in the two Houses from tabling the explosive report that will no doubt split the Government.

Those who want to stop the tabling are quoting the Ethics and Anti-Corruption Commission Act and the Anti-corruption and Economic Crimes Act, which require the EACC to file an annual report on corruption with the National Assembly and the President.

But Kakamega Senator Boni Khalwale, who, since Thursday night, has been on a one-man crusade to have the list of shame made public, said he was ready to make sure nobody tampers with the list of suspects of corruption.

“You saw me fighting that night with the Speakers to have the list released. I knew corruption had begun fighting back,” said Khalwale.

He said he was shocked that MPs were conniving to make sure no names are entered into the records of the Houses as being under probe for graft.

“We will win the argument. As far as I am concerned, tabling has already been done, we are just allowing the Leader of Majority to lead the debate. But for now, this is a parliamentary document,” said Khalwale.

The senator insisted that the tabling of the documents was a clear legal matter, and “at least this time, numbers will not decide whether we have to make the list public or not”.

Besides, Deputy Minority Leader Jakoyo Midiwo said the list was not conclusive because some names were missing, but insisted the list had to be discussed in the House.

“It seems there was a scheme to shield some people and expose others. We do not want thieves among us; if you are mentioned, step aside until you are cleared. These are names under investigation and Kenyans have a right to know,” said Midiwo.

However, he, too, had reservations about the process, and faulted the EACC for carrying out its investigation in secrecy.

“It is only right that these people step aside. We must discuss this list because if the Speakers of the two Houses disallow it, the President’s speech will be null and void,” he cautioned.

On the MPs and governors, Midiwo regretted that there was a lacuna in the law, which might make it difficult for them to step aside.

“The law is indefinite in carrying out investigations. There is no logic in asking the MPs or governors to step aside when the Constitution is very clear on how they can be removed from office, that is when they are convicted,” the Gem MP said.

“If an MP steps aside, who will lead his constituents? The least these MPs mentioned can do is to step aside from committees until they are cleared.”

And Makueni Senator Mutula Kilonzo Jr said the President’s asking members of his Executive to step aside meant he had adequate evidence to make the bold move.

“That list must have an executive summary explaining in detail the nature of complaints. This confirms the infighting witnessed recently at the anti-corruption commission. We kept on challenging the President to act on corrupt leaders. Now that he is working on it, the least we can do is support him,” urged the senator.

He said the report would be submitted to the director of public prosecutions and the two Houses could only discuss the list.

“The files are now opened. Those named will be probed to see if they are culpable or not. Let us wait and see the document on Tuesday.”

Senate’s Committee on Legal Affairs and Human Rights Saturday lashed out at the Council of Governors (CoG) for defending governors accused of corruption.

By Steve Mkawale | 6 hours ago