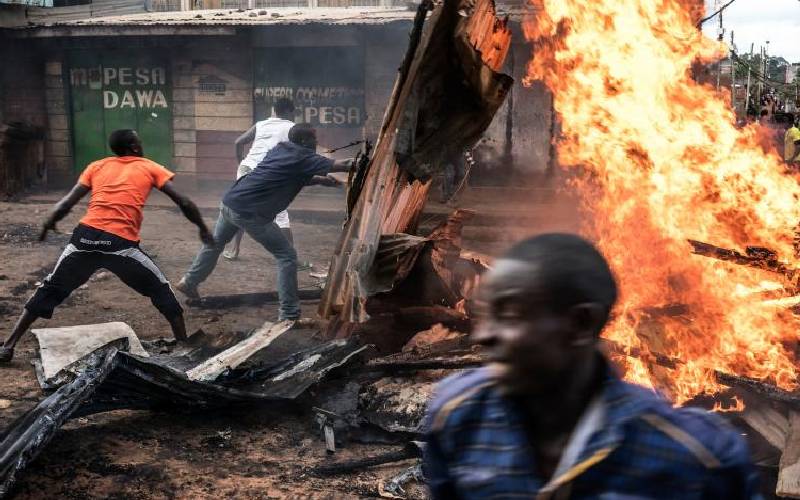 Politics of ethnicity, blackmail and polarisation often emerge during electioneering in Kenya. Communities revolt against each other leading to displacements, loss of life and destruction of property.

It is unfortunate that every electoral cycle is punctuated with episodes of violence, often perpetrated by the political elite.

While this ignoble act has been experienced in large scale nationally, a section of politicians, particularly in Nyanza are already promoting activities that could lead to full blown violence during next year’s elections, if not checked.

Evidence of germinating violence, planted by political leaders have been spotted in Homa Bay, Migori and Kisumu counties.

Such developments could possibly outgrow the objectives of their perpetrators and explode into a national crisis.

The vice is fast rearing its ugly head; thanks to politicians eyeing several positions including governors, senators, MPs and even MCAs in 2022.

The dishonest aspirants want to plunder public resources at the county and violence has become their modus operandi. Instead of using political platforms to sell their policies and promote development, the relay on rhetoric and populism.

They have also institutionalised chaos by unleashing goons on perceived opponents.

The rogue politicians exhibit raw arrogance, recklessness, splash money and disregard the rule of law even in the presence of security agents.

For instance, at a church fundraiser in Kochia, Homa Bay County, a man was attacked by youths hired by a local politician.

In another incident, a function at Homa Bay Central Catholic Church was disrupted when politicians converged to fundraise.

Perplexingly, some goons in the fracas were positively identified as members of a particular politician’s security apparatus.

In Kisumu County, violence broke out at a funeral in Muhoroni leading to the death of a mourner after politicians disagreed. Presidential aspirant Jimi Wanjigi was also stoned in Migori recently. This is a pointer to the high level of political intolerance being promoted by our politicians.

So far, no one has been arraigned in court or even arrested.

These ugly scenes have been witnessed yet the official campaign period has not been declared by the Independent Electoral and Boundaries Commission (IEBC).

Any right-thinking Kenyan should condemn this emerging trend and hope it is nipped in the bud.

We aspire for a free, fair and calm electioneering period. The leadership of sponsoring political parties and relevant government institutions must now reign in on rogue politicians ahead of the all-important 2022 General Election.

The writer is a communications expert. [email protected]

People do not realise that they can be easily be charged for murder just for appearing in a murder scene.

Members of the National Alliance for Change have kicked off nationwide tours to popularise their presidential bids.

By Martha Koome | 13 hours ago

By Demas Kiprono | 13 hours ago