Why are people in Central going back to ‘dark days’? 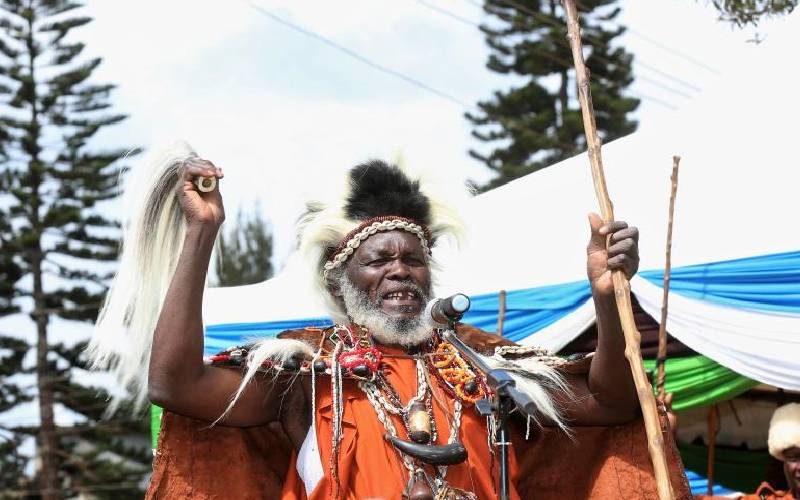 Today, the Central region and particularly the Kikuyu community seems to be in a peculiar political and cultural-religious dilemma. Alongside this are revival fires of traditional religious practices spearheaded mostly by the Kiama kia Ma (Council of Truth), an elders’ club which is gaining spiritual ground and winning the hearts of some Christian adherents.

This apparent clash of Christianity and tradition - a state of affairs that is a microcosm of most Kenyan communities - has brought about veritable syncretism which churches have opposed vehemently as contemporary idolatry.

Not unexpectedly, these events are taking place against an unfamiliar backdrop of an impending Kikuyu political orphanage in the form of the loud absence of a serious spokesperson, or candidates, for the presidency in the region during the looming 2022 elections.

Is it possible that the realisation that the community may no longer have a privileged grip and monopolisation of political and economic power is causing anxiety?

We note that the budging ecclesiastical tensions between the ‘sacred and the profane’ are getting increasingly grim by the day. JS Mbiti labelled the act of a people forfeiting their normative religiosity to seek alternative means of solving their problems as ‘religious concubinage’.

The traditionalists’ quest to wrest from churches societal roles of adjudication and religious leadership, and to compel powerful individuals in the society to yield to their demands, is in high gear.

Businesses- which are the community’s lifeline - have been hard hit by the pandemic, and this has heightened the need for practical and immediate solutions. Hard times have seen the Kikuyu Council of Elders invoke a special ancient ritual practised whenever the Kikuyu nation was beset by plagues.

The recent events involving media mogul SK Macharia exemplify the serious local social schisms. On January 31, 2017, 500 members of the Kiama kia Ma ganged up in an elaborate ceremony to invoke a curse on Macharia for purportedly betraying the Kikuyu community by openly supporting Raila Odinga.

Incantations and slaughtering of ritualistic black goats at the Ndaka-ini shrines were the highlights of the curse ritual which was presided over by the elders’ leader, Kiarie wa Rugami. In an apparent goalpost shift to accommodate political realignments, another ceremony to ‘cleanse’ Macharia was recently held at the same location.

A natural question arises. Why would Kikuyu land – a bastion of robust churchgoers where political candidates make regular appearances in churches, where the Bible has become the nearest thing to a storehouse of a universally recognised moral and political image, a region where Christ is the answer, suddenly start invoking traditional dogmas to solve contemporary dilemmas? Why is Christianity – by far and for the longest the most dominant religion in central Kenya finally losing its lustre?

Some observers have suggested that the lacuna which the traditionalists are filling has been created by the gradual loss of moral authority by church leaders, some of whom have been in the news for all the wrong reasons revolving around extortion, sexual improprieties, and leveraging the Bible for financial gain.

It has been pointed out that the principles of sincerity and consecration as practised by the founders and pioneers have largely disappeared from the churches. Even the most tenacious Christian sects-long revered for their strict and conservative religious discipline- now have representatives among scantily dressed beauty pageants and hooded rap artistes! Earlier on in these regions, donning ecclesiastical regalia such as the quintessential Akurinu white turban was an unfailing emblem of spiritual wellbeing.

When the president recently closed bars and churches in response to the pandemic, a joke did the rounds that the two ‘institutions’ are now almost indistinguishable!

What we are seeing today is traditional sacred spaces increasingly becoming arenas of political and social contestation. Has the Christian church, in the wake of modernity, totally lost the battle to make itself relevant to the political, social and economic realities of Central Kenya? Can it shake off its baggage of bad reviews as a westernised, acquisitive and oppressive financial machine, and invent a new and contextualised theological expression that is African and Christian?

Finally, we echo the famous admonition from the Bible: Ye are the salt of the earth, but if the salt has lost its savour, wherewith shall it be salted? It is thenceforth worthless, but to be cast out, and to be trodden under the foot of men.

Fear as village is turned into dumping site for bodies

Six people have been dumped in the area in the last two months.

By Gerald Lepariyo | 13 hours ago

By Billow Khalid | 14 hours ago

By Lynet Otieno | 19 hours ago