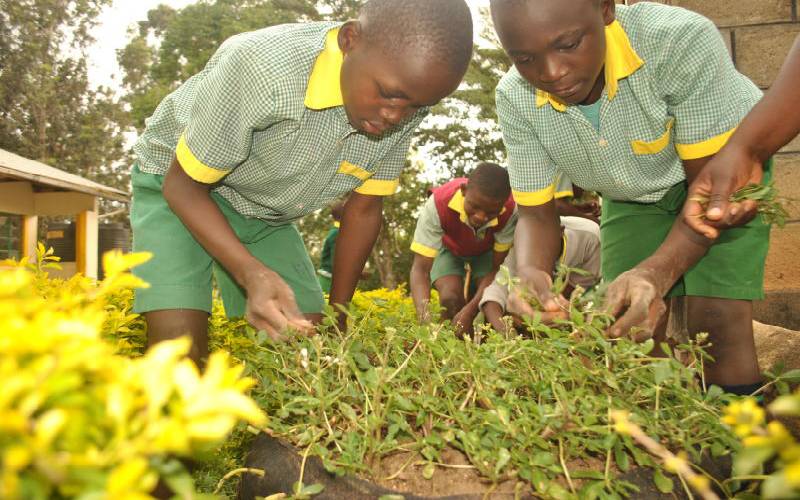 The manufacturers of a huge ship’s engine were baffled when, upon installation, it couldn't start. Engineers were called to figure out the problem. Hours later, there was no solution in sight.

Finally, someone sought the advice of a lowly technician who had hitherto been studiously ignored. The technician nonchalantly picked up a hammer and gave a mighty tap to a part of the engine. To the amazement of everyone, the engine roared to life, putting an end to hours of agonising misery over what had seemed like a catastrophic failure.

Education is the engine that drives the ship of life through the vast ocean of existence. Progressive societies are those that have had their education systems aligned to their immediate and future needs.

It is, therefore, understandable that Kenya has contemplated a change of system from the current one that has been in place since 1995, to a new Competency-Based Curriculum (CBC). It is hoped that the country will achieve its goal of Middle Income Status through the agency of the CBC system.

But a row between Education Cabinet Secretary Prof George Magoha, and Kenya National Union of Teachers (Knut) Secretary General Wilson Sossion threatens to hinder the roll-out of the CBC. Mr Sossion has, not without good reason, called for discussions on the teething problems associated with the new system.

He has asked that the roll-out be suspended until issues raised are resolved. However, CS Magoha has vowed to press on full steam, as unstoppable as time and tide.

Kenyans are dismayed by the CS’s intransigence although those who encountered Professor Magoha in the past allege that this attitude is consistent with what has always been his creed; entitlement, obstinacy and an inflated sense of self-worth.

Yet the CS’s outlook should not come as a surprise. The Jubilee administration, of which he is part, has repeatedly rammed unpopular policies down the collective throats of Kenyans. Taking advantage of citizens’ passivity, they have gotten away with sophist explanations even where it is apparent that some ideas are dead on arrival.

For instance, the Standard Gauge Railway, touted as a Jubilee flagship project, has lived up to the worst fears of pundits by failing to make profit. Conveniently forgotten are the calls for reason that would have informed the procurement of a cheaper and economically viable solution. Forgotten too are the promised sports stadia, laptops for school-going kids and the creation of half a million jobs annually.

More recently, the Government introduced the Huduma number. A sort of social security number that should enable ease of procurement of government services, its roll-out has been accompanied by veiled threats and coercions. Up to now, no one seems able to coherently articulate its benefits; not the citizens, or those charged with enrollment; perhaps not even government functionaries themselves.  Instead, most are deluged by a sea of confusion as deadlines for signing up are set and extended.

Because teachers are the technicians who know best how the engine of education works, they should be listened to. What Mr Sossion proposes for discussion is not outside the realms of reason, for as much as Kenya needs a system overhaul, it must be alive to present realities.

The first of these is that CBC cannot work where infrastructural facilities are inadequate. Currently, there are scores of schools without electricity, a prerequisite for CBC since copious amounts of assignments are internet based. In other schools, learning still takes place under trees or at best, in incomplete classrooms that are routinely inundated by floodwaters in the rainy season.

Second, as Mr Sossion avers, teachers are currently “inadequately trained on framework, content, teaching methods and interpretation” of CBC. Last, CBC places an inordinate focus on parents as agents of learning. It fails to account for children in boarding schools or those in homes where parents are too busy eking out a living to supervise CBC. In this current state, CBC would only be to the advantage of the privileged and would consign the indigent to a perpetual circle of poverty.

It would serve the Government well to call for a meeting of stakeholders in the education sector. There needs to be a climb down from tough talk and hubris.

The CS should recall from history, that the Titanic, dubbed the ship that even “God Himself couldn’t sink,” was destroyed by the captain’s failure to heed warnings from lowly seamen, of icebergs ahead.  Reason must prevail or else the entire education system risks extirpation.