As schools were closed due to Covid-19 outbreak, a form three student in Homa Bay county saw an opportunity to use his passion for science as well as his juakali skills to start a radio station.

Steve Biko Odhiambo of Father Tilen Mixed Secondary School in Mbita sub-county has become the talk of the Nyanza region after defying odds to building a radio station.

The radio transmission system is made of transistors, capacitors, amplifiers and cables among others from old radio sets and mobile phones and other used electronic appliances.

The assembling the electronic appliances and construction of the system began in March armed with research knowledge gleaned from physics books.

In June, he modified old gadgets including an amplifier, a microphone, a desktop computer and a smart phone which he uses to receive on-air calls from listeners.

The old gadgets were donated by villagers who were excited by his idea.

Towards the end of July, the local community allowed him to use a stalled water kiosk adjacent to Onundo Stadium for his studio for the FM radio.

In the first week of August, Odhiambo started hitting the airwaves.  Konzer FM, which broadcasts in Dholuo. had been born. It is heard on 106.9 or 107.0 FM.

During that time, the radio station could only cover a radius of a kilometre. It could only be heard in Mbita town.

But later in September, Odhiambo disassembled the transmission system and improved the strength  the signal strength to 26 kilometres.

Today, Konzer FM is heard in the entire Mbita Sub-county and parts of surrounding sub-counties such as Suba, Ndhiwa and Homa Bay.

It has talk shows, musical and news programmes aired between 5.00 am to 10.00 pm every day.

Odhiambo’s efforts are appreciated by many people in the area.

When we met him in the studio on Monday, we learnt that Konzer FM was the culmination of his dream which began eight years ago when he was in class four. 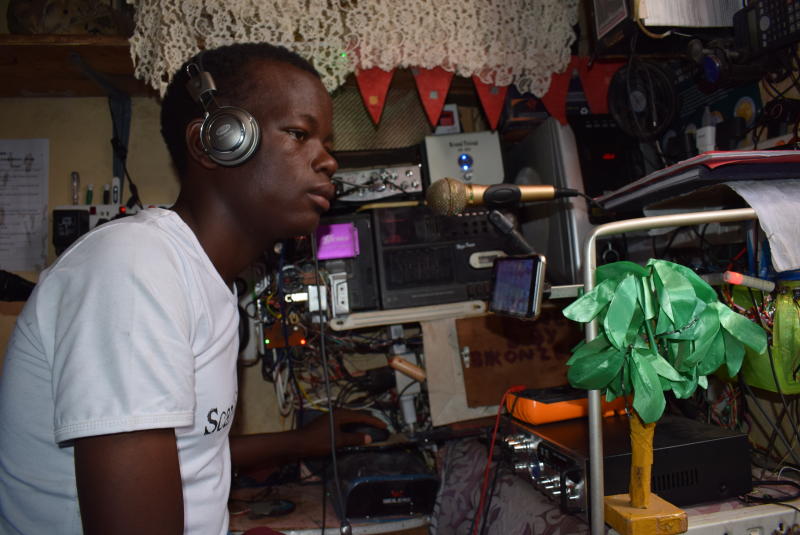 The dream was driven by his enthusiasm to understand how radio transmission works.

“Sometimes, I could lie down facing up trying to understand how transmission took place between radio sets and studios in Nairobi. That is how I started to think of how to make a radio transmission system using old electronic gadgets,” Odhiambo said.

He made a transmission system that year but it was unsuccessful.

The student attributes success in the current achievement to his knowledge in Physics subject and research.

Today, the radio station can generate income of between Sh100 and Sh200 from the sale of cards for greetings.

“My main work here is to monitor and repair the transmission system in case of any technical hitches. I also run radio shows,” Odhiambo said.

He is calling on the Communications authority which regulates broadcast transmissions to help him have his radio station registered.

Odhiambo says the radio station will not kill his ambition of becoming an electronics engineer. This is after many people advised him to stop going to school and concentrate on manning the radio station.

“My presenters will run the radio station when I go back to school incase learning resumes soon. My ambition is to join a university and become an engineer,” he said.

“This boy’s potential has come at the right time when the government talks about innovation... The government needs to support this boy with the required resources as soon as possible to enable him proceed with more innovations,” Opere said.

Opere described the student as a genius in practical subjects such as Chemistry and Physics.

“He can get 100 per cent in a Physics practical. He is generally above average in academic performance. This boy is an innovator,” the Principal said.

During our visit to Mbita town, almost everyone was listening to Konzer FM in their business premises.

They acknowledged the radio station for offering them entertainment and educational programmes.

The radio station has become popular in the area and enabled the residents to form an organization called Konzer FM Fans, which they use to undertake income-generating activities.

By Eric Abuga and James Oromo | 2 hours ago