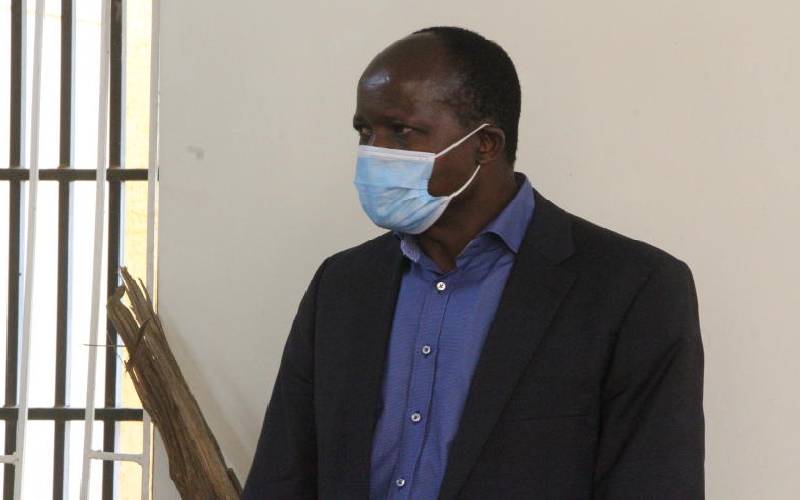 Migori Governor Okoth Obado (pictured) has today testified in court as a state witness in a case in which an MCA is charged with misleading police that the governor had poisoned him.
Obado and his Public Works executive Moses Chamwada were adversely mentioned by South Kanyamkago Ward MCA Graham Kagali in a case where the MCA claimed he had been poisoned in a Migori hotel.
Kagali and his accomplice identified as Duncan Owino have been charged with giving false information to the police on allegation that he was poisoned by the governor.
The governor defended himself against the allegations terming them politically instigated.
“I have no link to the matter and have no issue that may make me organise for Kagali's poisoning,” said Obado.
He urged the court to treat the MCA's allegations seriously and take appropriate action against him.
Chamwada said he was not aware of the alleged planned poisoning, terming them strange allegations.
“I was perplexed, I was disturbed, by that kind of allegation that one person known to me and a friend can wake up and allege that I have arranged for his poisoning,” he said.
Chamwada added that he was not charged but however asked by the DCI to record a statement over the allegations.
Earlier the two accused had been charged with two counts of providing false information and Conspiracy to defeat justice, but Kagali and Owino denied the charges when they appeared before Migori magistrate Dickson Onyango.
The two were released on Sh150,000 bond each and two sureties of similar amounts.
Lawyers Sam Onyango and Kerario Mwita who represented Kagali said they would “pursue justice for their client to its logical conclusion.”
On March 27, the MCA was rushed to Akidiva Memorial Hospital after he complained of stomach problems.
According to the MCA, he had taken poisoned tea at a Migori hotel before developing the complications.
He reported the matter accusing senior politicians in the county for orchestrating the poisoning scheme.
During his last statement to the press Kagali maintained that the arrests were aimed to trick him into withdrawing his earlier poisoning case.
“They are using threats and intimidation so that I drop the cases I had filed, I will stick to my course and ensure justice prevails."
The case will be heard on July 14, 2020, where 16 more witnesses are expected to testify.

Even before the pandemic, the media industry had been on a slippery slope as a result of a drop in revenue and digital disruptions