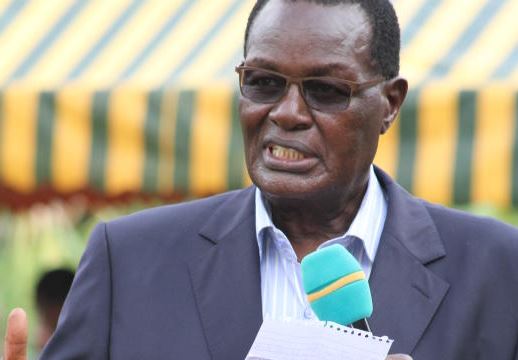 Former Cabinet minister Chris Obure (pictured) has declared interest to succeed Governor James Ongwae as Kisii governor in 2022. Dr Obure, who is Chief Administrative Secretary in the Ministry of Transport, also served as senator from 2013 to 2017. He dismissed his critics’ arguments that he is too old to vie for the position, terming them as cowards. The 76-year-old politician said he is still strong and has the necessary experience to serve the people of Kisii for one term as their governor before retiring in 2027. He dismissed as propaganda reports in social media in which some people equated him to former Zimbabwe President, the late Robert Mugabe. “There was propaganda in social media prior to the 2017 elections in which some people could take a photo of the late Zimbabwe President Robert Mugabe dozing in some meetings and liken it to me, which is not true at all. As you can see, I am as fit as a fiddle,” he said. Obure was addressing mourners during the burial of his aunt Abigael Ntabo at Boigesa village in Bobasi Constituency on Saturday. The veteran politician was first elected as MP for Machoge-Bassi Constituency in 1983, which currently includes Bomachoge Borabu, Bomachoge Chache and Bobasi constituencies. He said he was certain he would win the Kisii governor’s seat. Obure previously served as a Cabinet minister in the governments of President Daniel arap Moi and also in the coalition government of retired President Mwai Kibaki and former Prime Minister Raila Odinga. The Transport CAS said the government will complete Kebuku-Nyangusu- Nyamache and Omoringamu-Sengera roads that were commissioned by President Uhuru Kenyatta but stalled after the government terminated a contract awarded to Civicon Company. “The company delayed in constructing the roads, forcing the government to terminate the contract. This sparked a protracted court case which is over now and the contract for the roads has been awarded to a Chinese company that is expected to commence work soon,” said Obure.