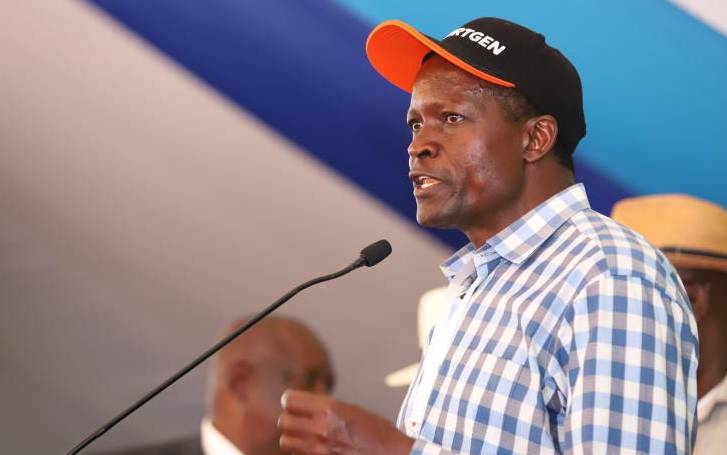 Anti-Corruption Court in Nairobi on Thursday barred Migori Governor Okoth Obado, his daughter and brother from disposing or dealing with a Sh34 million house in Loresho, Nairobi, for six months after EACC filed a case claiming it was bought through proceeds of crimes.

Justice Mumbi Ngugi in her ruling ordered Mr Obado (above), Everlyne Odhiambo and Peter Kwaga not to sell, transfer or deal with the property on LR NO 21080/38 for six months.

“An order is hereby granted in terms of section 56 of the anti-corruption and economics crime preserving the property referred to as Loresho Ridge House No C1 LR No 21080/38 restraining the respondents, their agents, servants or any other person from selling, disposing of, wasting or in any other way dealing with the property aforesaid for a period of six months,” ruled justice Ngugi.

Ethics and Anti-Corruption Commission in its case filed by lawyer Phillip Kaguchia accused Obado of engaging in graft.

In tits court papers, the anti-graft body claims that more than Sh2 billion was paid to companies owned by close members associated with the Governor, his brothers Kwaga and his wife Christine Akinyi, Patroba Ochanda and Joram Opala, their mother Penina Auma Otago as well Kwaga’s sister-in-law Carolyne Onyago.

“In exercise of its mandate, is investigating allegations that public officers in the County Government of Migori conspired with private contractors to engage in a fraudulent scheme to embezzle public funds through inflated or fictitious procurement contracts. Consequently, the said public officers, their associates and private contractors have accumulated illicit wealth to the detriment of the public,” EACC claims.

According to EACC, Obado’s daughter, Everlyne has been collecting rent from the contested house.

EACC’s investigator Ann Murigih told the judge that EACC first sought to investigate the trio’s accounts at the Co-operative bank.

Court documents read that sleuths were interested in Obado and his relatives’ activities between 2013- 2017.

She argued that investigators have been investigating the county on allegations that Obado’s family members and his proxies had registered a number of firms which allegedly illegally got public funds from the county.

According to the investigator, the probe established that Sh34 million, drawn from Kwaga’s account bought the property from the Kenya Power Staff Retirement Scheme.

“There are reasonable grounds to suspect that Loresho Ridge House No.C1 on L.R. No.21080/38 (Title Number I.R. 74363) was acquired by the first respondent (Kwaga) using proceeds of corruption in the form of fraudulent payments for contracts awarded irregularly without following procurement procedures,” Murigih claimed in her supporting affidavit.