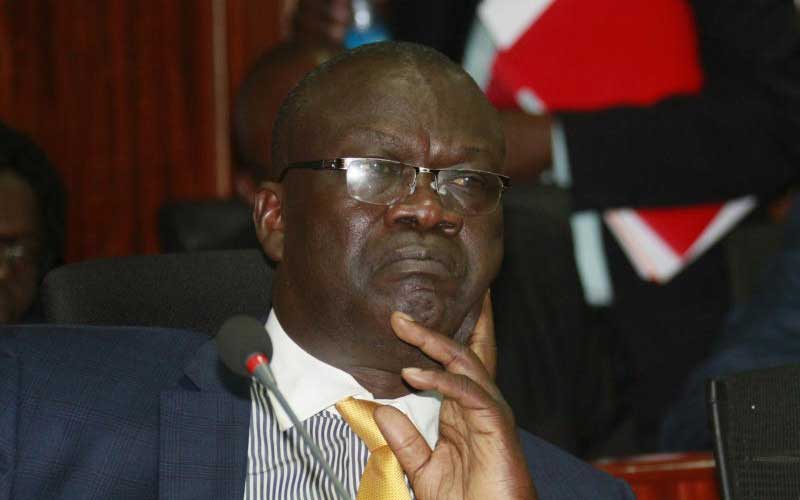 Political leaders in Siaya are divided on who to support in the race to succeed Governor Cornel Rasanga (pictured).

Over the weekend, the leaders turned two burial ceremonies into platforms to discuss Mr Rasanga’s succession.

He said Orengo is one of the heroes of the second liberation and should be rewarded for his efforts in the fight for multipartysm.

“A time has come that we must now reward our heroes with political seats and Orengo deserves a reward,” said Atandi.

He also criticised the government for abandoning former freedom fighters such as the late Achieng’ Oneko and his family.

Jubilee Secretary General Raphael Tuju denied claims that he is eyeing the Siaya seat. He told mourners that he was eyeing “bigger things” at the national level.

“The money that the county receives every year is between Sh6 billion and Sh8 billion. The biggest chunk of this money goes to recurrent expenditure. Only Sh3 billion is left for development. This is not fair for Siaya,” said Tuju.

He challenged county leaders to stop petty politics and focus on development.

The politicians first met at the burial of Mrs Loice Oneko, widow of freedom fighter Achieng’ Oneko, in Kunya, Rarieda, and later in Alego to condole with politician William Oduol who was burying his father, Mzee Lawrence Oduol.

In Alego, Orengo, Ochanda and Amollo engaged in a war of words over how Rasanga was picked as the ODM nominee for governorship. Amollo said regarding the 2022 race, the region’s leaders should dialogue on who they should settle on to succeed Rasanga.

Ochanda dismissed Amollo’s suggestions, saying it was dialogue that led to Rasanga being elected in 2013, against the wishes of the residents.

“In 2012, we were with Oduol, Orengo, and former Gem MP Jakoyo Midiwo in one camp. Oduol and I were eyeing governorhsip, while Orengo had interest in the Senate seat. But Oduol and I were pushed to make way for Rasanga,” said Ochanda.

Orengo said ODM party should conduct primaries where any party member is allowed to vie for the Siaya governorship.