A suspected thief was Friday lynched by irate mob in Kondele area in Kisumu after he allegedly snatched a phone from a woman.

While the phone was later recovered from him and handed over to the woman who was traveling to Kakamega, the teenage boy was accosted by the angry Kondele residents who accused him of being one of the thugs who terrorize people in Kondele. 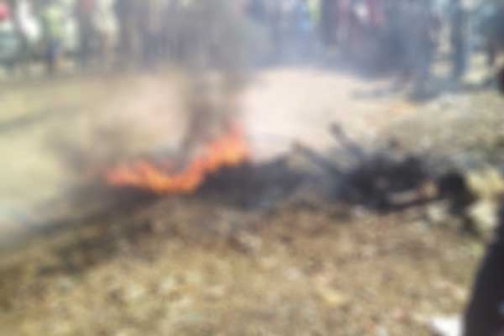 The boy who is said to be hardly 18 years old was only known by the name Mose (shortened form for Moses) and was a 'well-known thief' in Kondele.

"He is very bad at night," said Onyango, a resident in Kondele area, adding that he could easily stab whoever resisted his attempts to steal from him at night.

Police from Kondele later in the day picked the charred remains of his body and took it to Jaramogi Oginga Odinga Teaching and Referral Hospital mortuary in Kisumu.

Real Madrid president Florentino Perez is determined to sell Cristiano Ronaldo, according to the Sun.