Police hunt for 14 remandees who escape from Ahero police cells

Police in Kisumu have launched a manhunt after 14 remandees who escaped from Ahero police cells on Friday under unclear circumstances.

Member of County Assembly (MCA) for Ahero Ward Maurice Aloo, who was involved in robbery attack two weeks ago, now claims his life is in danger following the 6am incident.

Three among detainees who fled, police say are facing robbery with violence as well as murder charges involving Aloo.

The County Commandant Nelson Njiiri said a police officer who was manning the facility at the time of the incident was overpowered by the remandees.

''The officer had just given them a bucket of water for cleaning and was supervising them while standing outside the cell next to the door. It was then that the suspects forced the door open, pushing down the officer,'' he said.

“ One of them was however cornered and rearrested minutes later,'' he added.

The remandees then climbed over the cell's fence and escaped on foot.

According to Aloo, he heard gun shots and when he arrived at the police station, he was told the suspects had escaped.

When The Standard arrived at the police station, the escape incident was evident, as torn parts of shirts believed to belong to the suspects were still hanging hooked on the fence and their shoes and slippers were abandoned in the compound.

Spots of fresh blood could also be traced in the compound, an indication that the suspects might have struggled to make their way out and are nursing injuries.

''We believe they sustained injuries and they are likely to seek medical treatment soon. We are calling on members of the public and health workers to report to the police any suspicious cases,'' said Njiiri.

The MCA is however reading mischief in the disappearance of the suspects and wants the Government to provide him with security.

''Their disappearance is a confirmation that my case was not a normal robbery. Somebody could be after my life. Now that the suspects are still at large, I fear for my life,'' he claimed.

Aloo was shot in the thigh in his village home in Ahero in what was termed by police as 'robbery attempt'.

Two suspects were arraigned in court in connection to the 'botched robbery attempt'.

Aloo claimed that the two suspects believed to have been involved in his case had given revelation which could help unearth his case.

''I feel duped. There are people after my life. I have heard some people even claimed earlier that the case is going nowhere,'' he claimed.

The residents are still in shock and have flocked to the facility to find out what actually transpired.

''We have been here since morning to know the fate of the suspects, but nobody is telling us anything. We are only hearing they escaped. We are wondering,'' said Lilian Achieng', a resident. 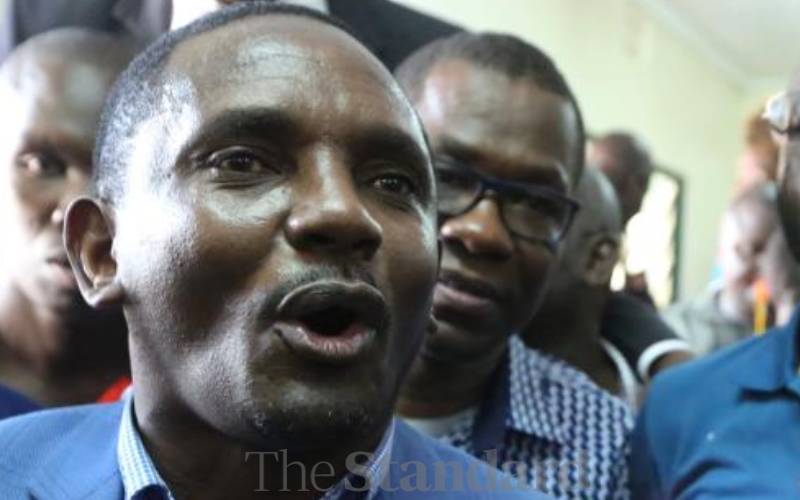