Why is William Ruto featuring on the geopolitical chessboard?

Supporters of President-elect  William Ruto and his rival Raila Odinga are either lost in ecstasy celebrating their hero’s victory, or thrown for a loop and struggling to come to terms with their idol’s defeat.

But beyond Kenya, countries are split on what to do over the electoral body’s decision that awarded Ruto the presidency. Will they throw their weight behind Ruto or sympathise with Raila who has rejected the outcome?

What is at stake is the future and governance systems of the countries in the region – from the semi-arid Eritrea on the Red Sea to the lush, landlocked Rwanda. Whoever emerges the winner in the upcoming Supreme Court ruling is likely to help create a new reality or keep the status quo of the East Africa region.

As a key nation, Kenya’s new ruler will be called on to either align himself with neighbouring countries such as Uganda, Ethiopia and Rwanda – and reject the West’s dictates to strengthen democracy and not befriend Russia and China – or cast his lot with the West that’s itching for the ejection of undemocratic leaders in the region.

Russia, Israel and more than a dozen African countries have preemptively rushed to send congratulatory messages to Ruto after the announcement of his victory and expressed their desire to work with his new administration.

But Western countries, which have subtly but firmly steered Kenya’s ideological direction since independence in 1963, are silent, hedging their bets.

“We call upon all actors to uphold the spirit of peace in the coming weeks,” said nine Western countries, including the United Kingdom, Canada, Australia, Germany and Norway in a joint statement that made no mention of Ruto’s win.

For the countries that endorsed the election results, Ruto was like a breath of fresh air, hence their wish for the quick exit of President Uhuru Kenyatta as some openly relished the election loss handed to Raila. Moreover, almost all of them appear to have an axe to grind with either Uhuru or Raila.

While Uganda President Yoweri Museveni’s congratulatory message was apparently driven by his cordial ties to Ruto and misgivings about a Raila-led Kenya, the aim of Zimbabwe President Emmerson Mnangagwa’s endorsement could well have been an attempt to wreak revenge on Raila, a long-time foe of Harare’s ruling party and a friend of the late Morgan Tsvangirai.

“I have no doubt he (Ruto) will serve his country, his people and our continent with distinction,” said President Mnangagwa.

The foreign countries’ nod to a Ruto rule is a stinging rebuke to President Kenyatta, who has not officially commented on his deputy’s victory and instead stuck by his protégé, Raila, who has been shunned by some regional leaders for his political activism.

Under normal circumstances, countries – out of respect for the incumbent leader – refrain from issuing statements that can be construed as siding with one party in a tense political situation such as the one obtaining in Kenya right now. In the controversial 2007 election, for instance, President Museveni was the only African leader to endorse Mwai Kibaki after Chief Justice Evan Gicheru hurriedly swore him in at a night ceremony in State House.

Given the outpouring of endorsements coupled with the great domestic support for Ruto, it’s clear that the man has been preparing for such an occasion for a long time.

Candidate Ruto reframed the country’s ills in a manner that upended Kenyans’ voting patterns. His bottom-up economic model has caught on, successfully coining “hustlers versus dynasty” slogan to persuade Kikuyus to throw the Kenyatta and Odinga families under the bus and vote for him and his running mate Rigathi Gachagua, a Kikuyu. The subtext of Ruto’s messaging was a call to reject the old Kenya that was birthed by first President Jomo Kenyatta.

Ruto’s populist message doesn’t seem to have gone down well with the country’s Western partners that naturally prefer a malleable African leader to an assertive, self-sufficient one who can forge an alliance with Russia and China.

Ruto’s election victory is thus looked at in the region and beyond through this prism of “is he a part of us or them” meaning is he a new Donald Trump-type leader who will shatter norms, or a typical African leader who would cooperate with the West.

In most Western capitals, Ruto is viewed as a disrupter, independent-minded and populist leader who is more inclined to focus on domestic issues than play ball with foreign governments on foreign affairs. Populism and the desire to make independent decisions beneficial to one’s country have led to the killing of some African and Latin American leaders in the past, most probably assassinated by Western intelligence agencies.

“He is a formidable, hard-working and eloquent politician with a prodigious ability to organise and inspire. But he also has the whiff of the strongman about him,” wrote the Economist magazine in the same day he was declared winner.

Ruto’s views on ticklish affairs in the region and beyond is of major interest for the European Union and the United States, which are fearful of any dramatic changes that could threaten their core security and economic and political interests in Africa.

Majority of the African leaders who congratulated Ruto share an anti-Western streak and appeared to take delight in seeing the back of Uhuru, a pro-Western leader.

On August 5, Museveni, who has been in power since 1986 and is known for speaking his mind, urged America to “consider separating us from the sanctions in a war where we are not participating.” He made the statement after meeting the US Ambassador to the United Nations Linda Thomas-Greenfield who was on a charm offensive to coax African leaders away from Russia’s influence.

Nine days earlier, Museveni had met with Sergey Lavrov, Russia’s Foreign Affairs Minister, and lauded Russia’s role in Africa. “Russia has been supporting the anti-colonial African movement for the last 100 years and I commend their long-standing relationship with Uganda,” Museveni wrote in a tweet.

In Ethiopia, Ruto’s victory may see Prime Minister Abiy Ahmed heave a sigh of relief as the cozy ties between leaders of the Tigrayan rebel group and the Uhuru administration are likely to be downgraded–if not frozen altogether.

“I wish you best of luck in your endeavours ahead and we look forward to working closely with you on common bilateral and regional interests,” Abiy said in his message to Ruto.

The relations between Abiy and Uhuru took a hit after Tigrayans waged a war in 2020 against Addis Ababa. Since then, Abiy has been locked in a vicious zero-sum indirect war with the West, especially the European Union that has been striving to return Ethiopia’s former ruler, the Tigray People’s Liberation Front, to power or at least get rid of Abiy, who–to the West’s consternation–appears to wear his relations with Russia and China as a badge of pride.

The West has recently railroaded Abiy’s administration into accepting a proposal to hold peace talks with the Tigrayan rebel group in Nairobi. But the talks are already dead in the water as the two sides brace for a new offensive amid an exchange of recriminations.

Uhuru, who always avoided an open collision with Abiy during the early days of the war between Tigryans and the Ethiopian government, made no secret of his wish to see Tigrayans accommodated in Abiy’s administration. During his term, Ambassador Jeffrey Feltman, the former US Special Envoy for the Horn of Africa, used to regularly visit Kenya to pick Uhuru’s brain on the Ethiopian crisis.

“The fighting must stop!” Uhuru said last year in a statement after conferring with African leaders, the United States, the UK and the European Union on his efforts to “try to bring an end to this crisis.” President Kenyatta – while in New York last October to chair a UN Security Council session on diversity, State-building and peace–also urged Ethiopia’s warring parties to “cease hostilities and be able to engage and find a political solution.”

Interestingly, the first person who celebrated Ruto’s win was Somalia’s former president Mohamed Abdullahi Mohamed ‘Farmajo’ whose disdain for the West’s role in his country cost him his seat after pro-Western opposition groups ganged up on him.

Like his successor, Hassan Sheikh Mohamud, who also congratulated Ruto, Farmajo has a bone to pick with Raila. The opposition leader had in 2013 told an audience in London that he was a “strong supporter of recognition for Somaliland (a rebellious region in Somalia) and have said so without fear of contradiction.”

Raila is given to uttering insensitive words, a trait that could be a drag if he ever becomes President.

During his campaign, he irked Ethiopians, Ugandans, Somalis and South Sudanese when he asked Kenyans not to compare their country with neighbouring nations. “Kenyans don’t want to be compared with the worst in the world,” he said. “You compare them with the success stories.“

Supporters of Ruto and Raila may have been consumed by the win or loss of their preferred leader, but the political ideology of the new president is an issue of paramount significance to many foreign countries interested in Kenya and its neighbours.

For the last 10 years, Uhuru played it smart, doing business with China and Russia without antagonising traditional Western friends.

But the incoming president may not be as lucky. He is likely to find it hard to avoid competing narratives in Africa and beyond: A Western-driven campaign to demonise China and Russia, and another spearheaded by an awakened global South that calls for the shedding of colonial baggage and charting an independent course. Nigerian and South African leaders’ congratulations to Ruto have just underscored their unwillingness to keep silent out of deference to their Western friends or to Uhuru and his bet, Raila.

Museveni appears to have accepted – despite the expected Supreme Court verdict threatening Ruto’s victory – the reality of Ruto’s presidency. He called the president-elect “to reassure you of Uganda’s commitment to continue partnering with Kenya in advancing regional and continental agenda through the East African Community, African Union and other multilateral platforms.”

“Our bilateral cooperation will score tremendous achievements and I look forward to working more closely with you,” Museveni said in a Twitter statement.

Emmanuel Dombo, director of communications for Uganda’s ruling party, the National Resistance Movement, or NRM, told The East African newspaper last year that “Ruto is a very good friend of President Museveni, Uganda and the NRM as a party.”

“That is why he came and campaigned for our presidential candidate one time. This is the brotherhood of the African people,” Mr Dombo said. “The two have built a reputation and given the role that Museveni has played in Uganda and the East African region, he is someone regional political leaders always consult.”

Museveni, who’s known for pushing for the African cause and not bowing and scraping to the West, decried last month that Africa lacked a “centre of gravity.”

“[W]here does Africa run to when Africa is under attack both politically and economically?” Museveni said in a tweet after commissioning a 500kW solar power plant, a surgical masks and sanitiser producing unit, an oxygen plant, and an armoured vehicle production and assembly plant. “It is, therefore, the role of us all today to advocate for a united East Africa and Africa.”

Will Ruto – if his victory is confirmed – take after Museveni and become a strongman? Time will tell whether the two are cast in the same mould. 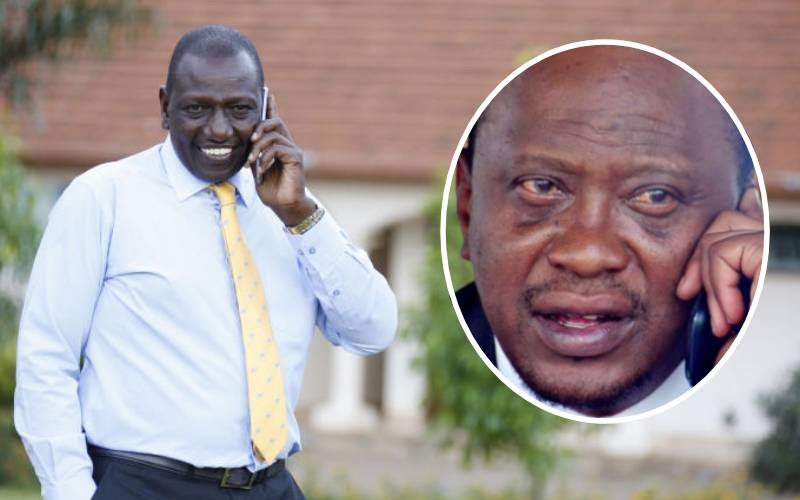 Premium Why is it so hard for Ruto, Uhuru to talk on phone?
Politics
By Allan Mungai
4 months ago 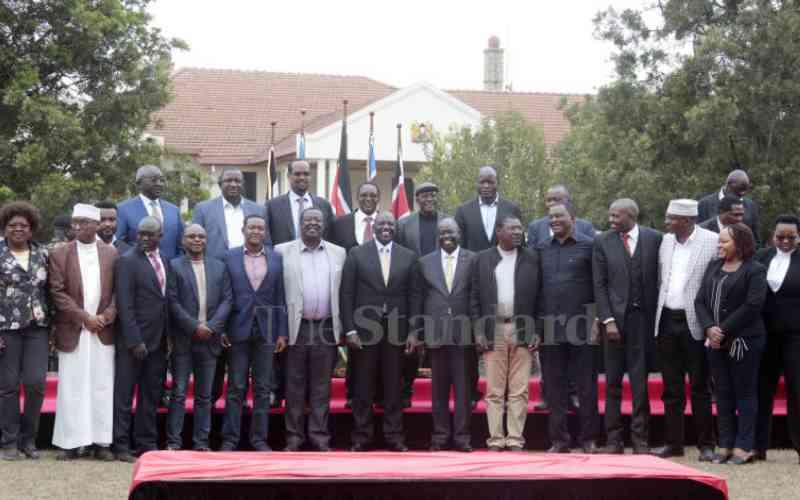 By Biketi Kikechi 2 hrs ago
Premium Spoiling for a fight: Have Ruto, Gachagua fallen into Raila's trap?
.