Long queues have been witnessed in a number of SIM card registration centres across the country as Kenyans rush to beat the April 15 deadline.

A spot check by The Standard in Nairobi today revealed long queues that snaked around centres run by some leading mobile operators as their subscribers sought to register their details afresh following a directive by the Communication Authority of Kenya (CA).

Subscribers who will not have registered their lines with their respective service providers by April 15 will face disconnection, according to CA Director General Ezra Chiloba.

Chiloba said the registration drive is geared towards enforcing the Kenya Information and Communications Regulations of 2015 and is also aimed at improving data accuracy, enhancing cybersecurity and stepping up the fight against money laundering.

He added that the deadline, which is only seven days away and follows a similar attempt by CA to clean up telecommunication service providers’ data in 2012 and 2018, will not be extended.

As a precondition of the registration, natural persons must submit to have their photographs taken, processed and retained. They must also provide a signature and disclose whether they have other lines registered to them, failure to which, their unregistered cards will be switched off.

According to some subscribers, however, the directive forcing the telcos to re-register already registered subscribers is redundant and must be voided.

Taking to social media, they called out some of the telcos for their insistence on physical documentation and pointed out that registration is done upon purchase.

They also noted that the data being sought by CA is captured in the beleaguered Huduma Namba identity ecosystem.

Sentiments shared by activist Eliud Karanja Matindi who has moved to the High Court seeking orders to suspend the exercise saying the mobile service providers have no legal mandate to store personal data on behalf of CA or the government. 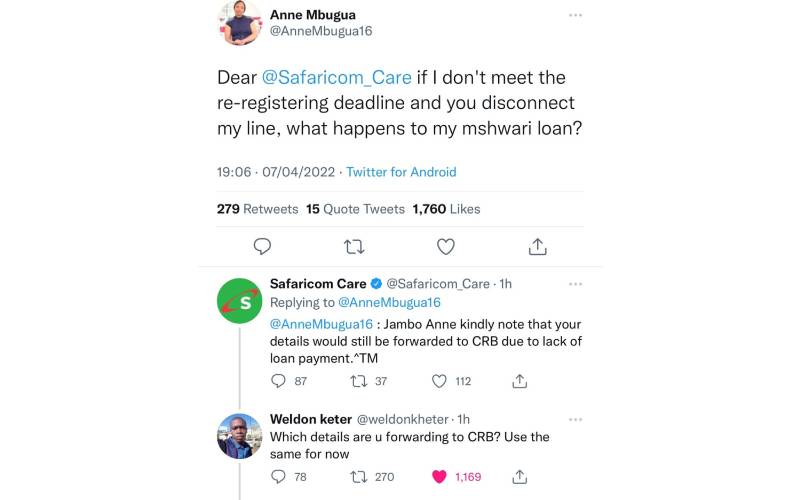 According to Karanja, the directive is unconstitutional and will irreparably harm millions of subscribers who will not have complied by April 15.

“A conservatory order is, therefore, necessary to protect mobile telephone service subscribers who will, in its absence, suffer irreparable harm and gross abuse and violation of their fundamental rights and freedoms, with no prospect of an adequate remedy in the event that the petition is successful,” said Karanja.

Others, however, agree with CA and are urging the telcos to expeditiously carry out the clean-up exercise, that they say, will weed out all unregistered and improperly registered SIM cards.

Masinde Muliro launches fund in a bid to reduce dropout cases
Education
By Kennedy Mureithi
23 mins ago
We're ready for junior secondary learners, Kepsha says ahead of meet
Education
By Patrick Beja and Mike Kihaki
42 mins ago
Premium Of World Cup and why Kenyans thrive in analysis than playing
Andrew Kipkemboi
By Andrew Kipkemboi
51 mins ago
Kylian Mbappe leads France past Poland 3-1 at World Cup
Sports
By Associated Press
1 hr ago
.

By Patrick Beja and Mike Kihaki 42 mins ago
We're ready for junior secondary learners, Kepsha says ahead of meet

By Andrew Kipkemboi 51 mins ago
Premium Of World Cup and why Kenyans thrive in analysis than playing
.