By James Wanzala | 8mos ago

The Ministry of Public Service, Gender, Senior Citizens and Special Programmes has launched a 16 days’ campaign to shed light on gender-based violence (GBV).

The campaign, dubbed 16 Days Of Activism to End Gender-Based-Violence with the theme; Orange the World: End Violence Against Women Now, will be officially launched in Bungoma County on Thursday 25, November.

Thursday is International Day for the Elimination of Violence Against Women and the campaign will run up to December 10 which is Human Rights Day.

The Kenyan campaign seeks to stand with the rest of the world in solidarity against GBV.

Speaking at the campaign activation event on Tuesday evening at Kenyatta International Convention Center (KICC), Principal Secretary State Department for Gender Prof Colleta Suda said that, within the 16 days, there will be global, regional, regional, national and local actions together with the government and partners to pass the message.

‘‘We will be taking 16 days of activism to the grassroots and we will be in Bungoma, which will be the venue for national launch. We want to invite all the 47 counties to identify county priorities on how they can prevent GVB and if it has to be prevented, how we can respond to it effectively and strategies to put in place to make sure that GBV survivors have decent access to quality essential services,’’ said Prof. Suda.

The campaign message, in orange, was beamed on the KICC tower and will be illuminated on it till December 10.

She said GBV is cultural, political, social and religious in some instances and therefore it means there is need for a multi-sectoral approach to the interventions.

Survivors called upon the Government to come up with financial support mechanisms to help them pick up their lives after the incidents.

‘‘The Government should form something like a fund to support survivors who end up becoming poor or desperate to start something even if it’s a business. Some of the survivors especially from informal settlements and villages after coming out of the shelters find themselves hard to cope with life because they have nothing to start from like an income-generating activity,’’ said two female survivors.

Statistics reveal that GBV cases increased during the Covid-19 period. 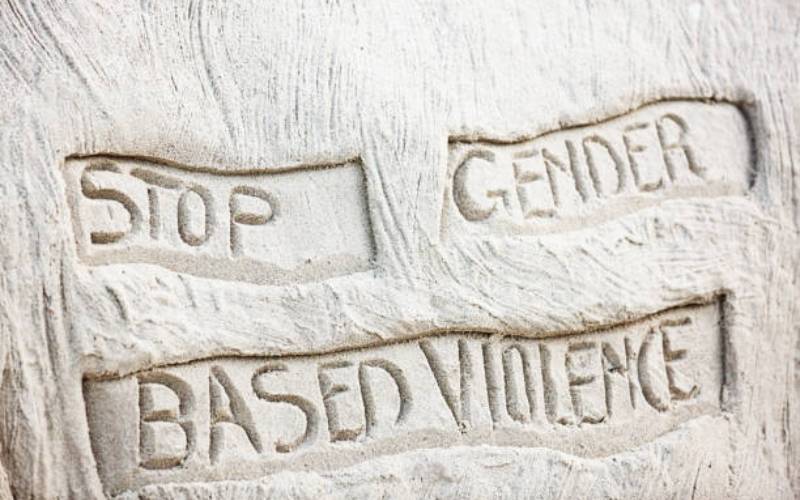 United Nations Women country director Anne Mutavati said it’s now 30 years since the global activism started and unfortunately it seems like GBV is not going away.

She cited the example of Kenya, which she said needs to firmly deal with Female Genital Mutilation(FGM), women intimidation during political campaigns and stop teenage marriages which stands at 25 per cent.

Ms Mutavati said that Covid-19 did not increase GBV cases but just brought out in the limelight what we have been talking about every day since Covid-19 is still with us.

She said Kenya is a global leader on GBV and has done well for instance in its commitment on 12 action points, policy formation and response to GBV under Generation Equality in Paris in June but more needs to be done on implementation.

‘‘What remains now is sensitising the nation on these commitments and push for implementation of those 12 action points,’’ said

Finland Head of Cooperation Anu Ala-Rantala said GBV is also now being practised online and therefore focus should not be on physical only but also virtual.

This was supported by Nairobi Women Representative Esther Passaris, who said there is also emotional violence apart from virtual and called for Director of Criminal Investigation director George Kinoti and Director of Public Prosecutions(DPP) to shut down social media accounts of former Nairobi Governor Mike Sonko for abusing his social media accounts to shame and abuse women.

The former governor has been posting secret video conversations that have gone viral.

‘‘I also urge all the first ladies, Presidential candidates to come together and ensure that we have peaceful elections free from GBV. As Women Rep, I have an Affirmative Action Fund through not a lot and we are in the process of finalising an MOU together with Nairobi Metropolitan Services(NMS) and Nairobi County Government with constriction of Sh20 million each to have the first GBV government-run shelter in Nairobi County,’’ said Passaris.

‘‘For the last one year since the last 16 days of activism in 2020, my ministry started Komesha Dhuluma Ya Kijinsia campaign, which has reached over 3 million Kenyans through public awareness campaigns on GBV, including engaging national boda boda association on prevention and response measures to GBV, medication practitioners, law enforcement to strengthen the response to GBV. We have also revamped two safe houses in Nairobi and in Migori County,’’ said Kobia.

She added that to put the 12 action points into implementation, her ministry is working on implementing them through including taking Generation Equality into grassroots for ownership and understanding of the initiative with Bungoma being the first county to launch it.

By Standard Team 1 hr ago
Premium Kenya awaits next President

By Tom Wolf 1 hr ago
Premium 'Handshake to Power, or Kiss of Political Death?' A Central Question of this Election

By Standard Team 2 hrs ago
Raila, Ruto's diaspora votes in numbers so far