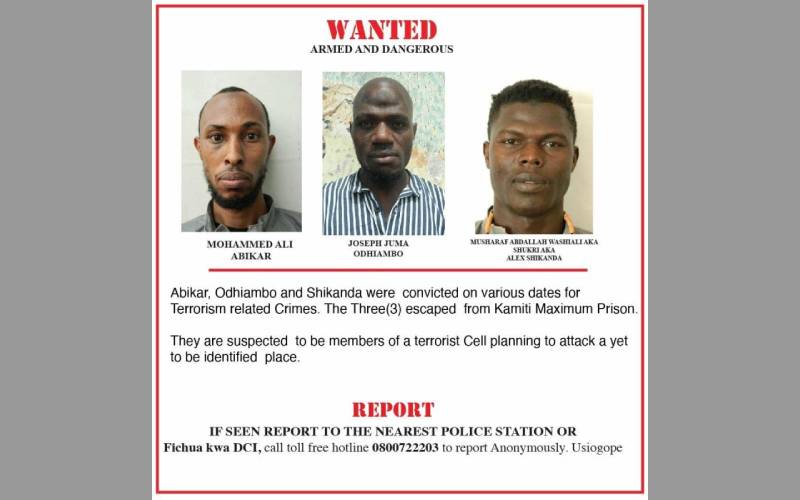 The three convicted terrorists who escaped from Kamiti prison on Monday have been flown back to the facility.

Speaking at Kamiti prison where the convicts were received, Interior CS Fred Matiang'i said they will be charged afresh for trying to escape.

Further, nine officers linked to the escape will be charged, the CS said.

He said more officers will be deployed to boost the prison's security. The CS, who described the escape as a "rude awakening", said the Interior ministry will work with the ICT docket to seal any loopholes that may abet such incidents in the future.

As much as the ministry is committed to implementing changes, the investigation into the escape is still ongoing to bring those involved to justice.

The Interior docket chief thanked the National Intelligence Service as well as the multiagency team that worked together to ensure the three convicted terrorists are returned to Kamiti prison.

"The officers failed and caused Kenyans anxiety ... we should never be in this position again."

Yesterday, President Uhuru Kenyatta revoked the appointment of Wycliffe Ogallo as the Commissioner-General of the Kenya Prisons Service, following news of the escape.

Ogallo has been replaced by retired Brigadier John Warioba who was sworn in immediately.

Uhuru directed Matiang'i to take all necessary action to pursue the Kamiti escapees.

The State Department of Correctional Services was also directed to sanction disciplinary action against all KPS personnel who were on duty when the security breaches occurred.

A senior officer in Mutito, who spoke to The Standard in confidence, said the escapees were captured at 11am on the border of Tana River and Kitui counties.

Musharaf Abdalla was convicted of attempting to attack Parliament in 2012; Joseph Juma Odhiambo, was arrested in 2019 at the border between Kenya and Somalia for planning to join the terror group al Shabaab and Mohamed Abdi Abikar was convicted for his role in al-Shabaab’s attack on Garissa University in April 2015. The Garissa attack killed at least 148 people, most of them students.

Endau, in Kitui East, is about 250km from Nairobi.

From Kamiti Maximum Security Prison via Thika to Matuu and on to Kitui, it would have taken the convicts five hours to reach Endau by car.

If they were walking non-stop, and covering four kilometres an hour, they would have arrived at Endau in three days.

The town is 88km from Kitui town.

What to do when you have two job offers

After evaluating both companies, you should be in a position to determine which company suits your values and career aspirations.