In the case filed at the High Court and East African Court of Justice (EACJ) in Arusha, Tuju, through his Dari Company, himself and his children claim that he suffered irreparable damage after the bank grossly violated the contract.

Tuju, through his Dari restaurant, entered into an agreement with EADB on April 10, 2015, to give his firm Sh1.2 billion loan.

Tuju and S A M Company Ltd signed a deal where they promised to guarantee the payment obligations on a full indemnity basis. The bank went ahead to advance Dari Sh951.6 million on July 31, 2015. That is when trouble began.

Tuju, in a case at the High Court, claimed the bank reneged to finance the second part of the additional Sh294 million for the development of a housing project that would finance the repayment.

In a 70-page case filed at the High Court in July and another 76-page case at the East African Court of Justice, Tuju says he sought a loan of Sh1.2 billion, Sh943 million for the acquisition of a 22-acre forested land dubbed Entim Sidai in Karen and purchase of a 94-year-old bungalow.

The property was owned by Scottish missionary Albert Patterson, who was operating a high-end restaurant and 14 rooms.

Part of the loan, Sh294 million, was to finance construction of 12 luxury two-storey bungalow homes to be sold at Sh100 million each.

He argues that failure by EADB to release the funds caused the project to fall behind schedule and Tuju’s company defaulted on repayments, setting the stage for asset seizures.

He says this denied him ability to repay the installments, which he would have begun after a 20 months' grace period when the investment would have started paying off.

He moved to the regional court after EADB challenged his case at the High Court claiming it had immunity to be tried in local courts. 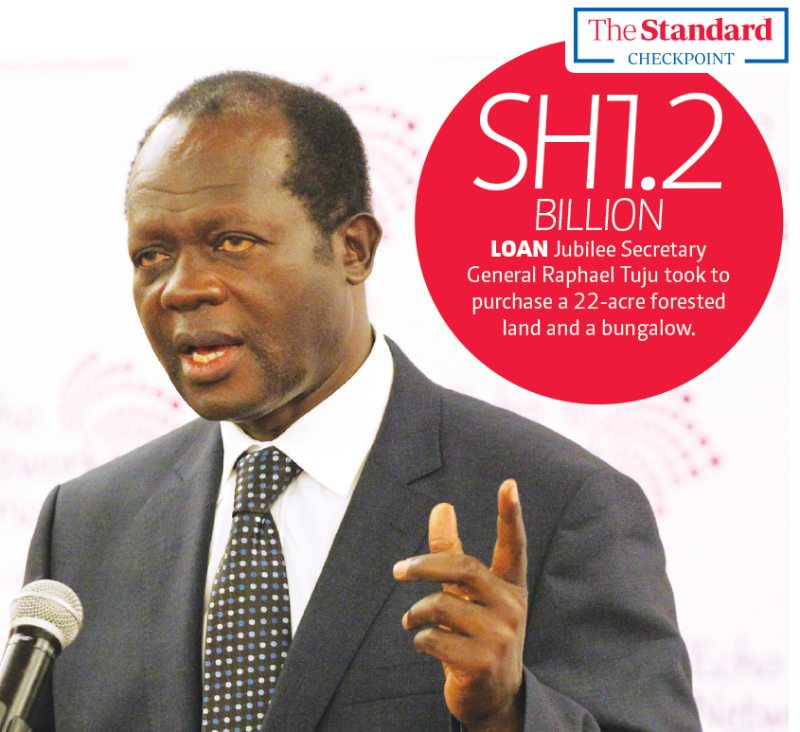 Tuju says based on the loan agreement, he had sold four houses off plan where the would be house owners paid installments, but, failure by the bank to release Sh294 million led to the collapse of the project and he was forced to refund the money he had injected in the project.

He reveals that he was approached by EADB Chief Executive Officer Vivian Apopo who said they were willing to support him buy the prime 23 acre land in Karen.

When he agreed to take a facility at the bank, they demanded Sh4.7 million for feasibility study which he paid. Tuju argues that after the payment the bank begun to switch goal posts. According to court documents, the bank asked Tuju to pay 10 per cent for the purchase of the Entim Sidai before release of the loan to buy land and development.

Though it was not part of his agreement with EADB, he says he obliged and diverted Sh100 million that he had set aside to put up accommodation for his Dari hotel to pay the ten percent land payment.

"We insisted that we sign an agreement, committing the bank to ensure the deal of Sh1.2 billion goes through so that we would not risk forfeiting the 10 per cent payment for land. The condition in the land payment was that the transaction needed to go through in 90 days," read the court papers.

One of the conditions for the complete sale of the land and to be financed, he needed to change the land from agricultural to commercial and whereas the process would take long, Tuju notes that he paid for a special sitting of the Nairobi provincial land board to approve transaction within 70 days.

After the land board gave the approval of change of user, Tuju told court that, the bank shifted goal posts and insisted on charging a plot in Upper Hill worth Sh900 million instead of the Entim Sidai title as agreed.

He notes that despite the fact that the bank had promised to take care of the National Environmental Management Authority (Nema) approval charges and lawyers, Kaplan and Dalian Vickys lawyers who were recommended by EADB charged him Sh15 million for the transaction.

Tuju also paid KPMG who were the joint writers of the account thus pushing his expenditures high despite the agreement for the bank to finance the same.

However, EADB only released Sh943million and left out Sh294million a move that halted the housing project.

He further accuses the bank of thwarting another investor from Dubai from buying the entire loan and take over the development of the projects in Dari and Entim Sidai where the UAE bank was ready to inject Sh3 billion.

"The investor was ready to pay EADB Sh1 billion as part of the money they had given him and inject a further Sh2 billion into the two projects at Dari and Entim Sidai but the EADB refused," read part of the court papers.

The Dubai investor only needed Entim Sidai title deed to take over the project which they wanted to put up a five-star hotel under the global Four Seasons or Monarch Hotels franchises.

After having defaulted for two years, in 2019 EADB took Tuju to Queen's Bench Division of the High Court of Justice of England and Wales seeking more than Sh1.4 billion which included the principal and loan interest the firm defaulted in repaying the cash that was advanced on July 31, 2015 at Sh951 million. The loan remained in default since 2017.

But in the court papers at the High Court in Milimani and in EACJ, Tuju, his son and daughter - Alma, Mano, Raphael and Yma- accuse the court in London of unfairness claiming that the judge who ruled on the London case was a part-time judge who was a full-time solicitor at Evershed a firm that had a contract with EADB.

He noted that deputy judge of the UK High Court, Daniel Toledano, worked at Evershed and the same bank had also employed the daughter of the EADB chief executive officer.

The ruling by the London court seeking to have Tuju's firms auctioned was quashed by Court of Appeal, giving stay to any attempts to declare Tuju bankrupt and auctioning his property to repay the EADB bank.

Bottom-up model is not a far-fetched idea; it has worked well in China