By Stephanie Wangari | 6mos ago 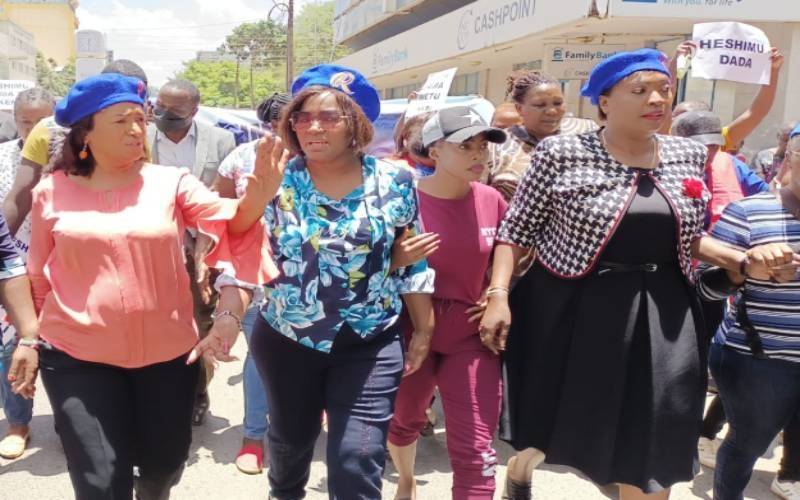 Earlier this week, Mama Ngina Kenyatta drummed up support for Raila Odinga’s presidential bid, saying those opposed to the candidate that her son, President Kenyatta, has endorsed, do not have Kenyans’ best interests at heart.

She called out a section of leaders, who have been insulting the president and his allies, suggesting that the critics were not raised well. She spoke at the burial of her cousin in Gatundu South, Kiambu County.

After the video of Mama Ngina making the remarks went viral, a foreign-based male Kenyan national recorded himself on video insulting the former First Lady, accusing her of feeling entitled.

He uttered the crudest remarks that someone could use on a person.

To express their anger at the remarks, Kananu, Passaris and Shebesh organised peaceful protests in the streets of Nairobi’s central business district.

“I’m urging men not to use women as punching bags. People should refrain from embarrassing women in front of their children and husbands. Insulting Mama Ngina Kenyatta is where we draw the line,” said Shebesh.

On her part, Passaris said Mama Ngina is a respectable woman in Kenya, who would easily pass for the title “mother of the nation”.

“Mama Ngina has a right to speak about Kenya’s politics. [by virtue of being a woman], she represents 50 per cent of Kenyans’ collective views,” said Passaris.

The man who kicked up the storm, following his remarks on Mama Ngina, said he supports Deputy President William Ruto’s presidential bid.

Passaris now wants DP Ruto to issue an apology over the derogatory comments “made by his supporter”.

“The Women of Kenya condemn the obscene utterances made against the honour of former First Lady and mother of our nation Mama Ngina Kenyatta. We demand an apology from DP, and ask him to rein in his supporters as their remarks, if not condemned, are condoned by him,” she said on Twitter.

Oguna revealed that most of the cases are political in nature.

By Alexander Chagema 32 mins ago
Will Duale hold talks with Shabaab or tackle them head on?