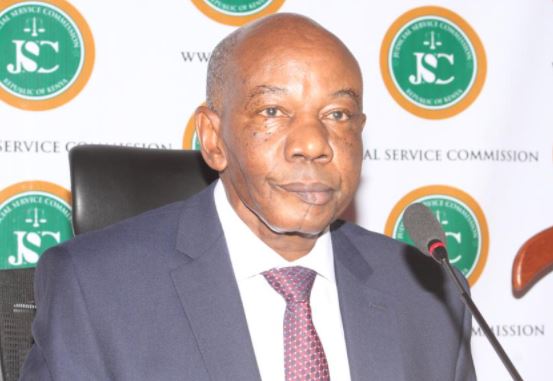 Ngatia (pictured) believes that criminal cases must end within six months of commencing, and that the back and forth is unnecessary.

“As CJ, if a case is filed on January 1, within that year it should be concluded. I would wish to see a criminal case started and concluded in six months,” the Senior Counsel told panelists on Tuesday.

Ngatia, who has over 40 years of experience in law, says that the Judiciary’s main challenge is lack of a consumer of the service.

JSC team rigged me out of the CJ position: Ngatia

Kenya's next CJ could be known soon after Appellate Court ruling

I will assess the President's mood before engaging him, Yano tells panel

“I have an eye, no other would have. For 40 years, I have been in magistrate courts everywhere in Kenya. I have a practitioners’ eye to see real and perceived weakness,” he added.

Should he be nominated as the next Chief Justice, lawyer Ngatia hopes that he will have the support of the Judiciary, Executive and Legislature in resolving the predicament on the appointment of 41 judges.

“A discussion would be the best. I need all hands on deck, without this it will fail,” he said.

On election petitions, Ngatia avers that too many petitions end up in the Supreme Court, which mostly turn out to be just a contestation of facts.

“Election petitions ought to be treated like normal litigations, because they are,” Ngatia told the panel.

The 64-year-old senior counsel is among ten candidates shortlisted for the position of Chief Justice, and the seventh to be interviewed.

If successful, he will become the second CJ to be appointed from outside the Judiciary after Dr Willy Mutunga.

The lawyer has been involved in almost all the groundbreaking cases at the Supreme Court, having represented big companies and high-profile individuals

He most recently led counsel for President Uhuru Kenyatta in the 2013 and 2017 presidential petition, winning twice and losing once.

Rai, who previously competed for Kenya, to make his debut for the Pearl of Africa nation in the continental event.

In Kakamega county, for instance, the government is spending Sh8 million each month, money that was not factored in the current budget.