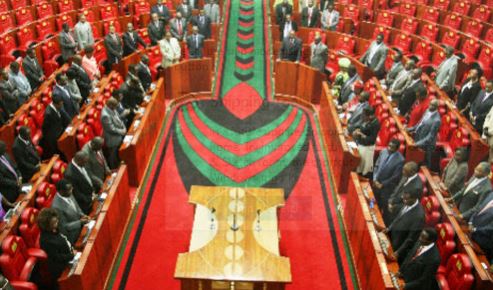 Members of Parliament condoled with Tanzanians over the death of their president, John Pombe Magufuli.

The MPs poured glowing tributes to the fallen president during the afternoon sitting, with the overriding message being that of Magufuli’s resolve to fighting corruption.

Most lauded him as a selfless leader who put Tanzania first in his government undertakings. Others, however, took the chance to caution against Covid-19, which Magufuli’s administration has been accused of trivializing.

Majority Leader Amos Kimunya led the MPs by recounting his unwavering anti-corruption past.

“He will best be remembered on his stance of the war on graft in Tanzania and in terms of enhancing service delivery and ensuring that all his civil servants are accountable to the people,” said Kimunya.

He further urged his colleagues to be cautious during the third Covid-19 wave, a message echoed by Eldas MP Adan Keynan.

“This Covid thing is a reality. And we must speak and demonstrate leadership on this,” said Keynan.

Kiminini MP Chris Wamalwa termed him a staunch and practising catholic, and a humble president who imbued strong family values.

“I had the chance to meet him while he was the Roads minister. He impressed me with his respect and professionalism. I mourn someone I know,” said Dagoretti South MP John Kiarie, who further urged Kenyans against speculating on his cause of death.

“He believed in his own people and his country. He believed in a bottom-up system of economic growth,” said Nominated MP David Ole Sankok.

Tigania West MP John Mutunga eulogised him as a strong-willed and principled leader with a firm focus.

“We also remember him for not pandering to the whims of the West,” said Okello, adding that there was a need to take Covid-19 seriously.

Suba North MP Millie Odhiambo, whose constituency borders Kenya’s neighbour on the south, lauded him for his work to enhance infrastructure.

“Whenever you cross into the Tanzanian border you will definitely know that you are now in Tanzania because of the very good protection of the environment,” he stated, urging that Kenya and Tanzania maintain their friendly relations.

The Kenya national women’s hockey team thrashed rivals Uganda 11-0 in a one sided Africa Cup of...