NAIROBI
By Mercy Asamba and Emmanuel Too | February 2nd 2021

According to the charge sheet, the ex-governor committed the alleged offence in Buruburu, Nairobi in 2019.

“On May 25, 2019, at Buruburu Phase 4 in Kamukunji Sub County within Nairobi County with others not before the court, unlawfully led a group of men and assaulted Joel Kinja Muthui thereby occasioning him actual bodily harm,” the charge sheet read.

Sonko, who yesterday, spent over six hours being grilled by the detectives over his conduct is now facing ten charges emanating from the incident.

He is being represented by lawyers John Khaminwa, Danstan Omari and others.

Yesterday he was grilled over robbery with violence cases and assault. The cases are said to have happened in the past years.

Detectives are seeking more time to hold him for further grilling over claims on the 2017 election chaos and other cases.

The ex-governor was summoned to appear before the Directorate of Criminal Investigations on Monday to shed light on claims that Interior PS Karanja Kibicho and himself jointly participated in causing mayhem in 2017.

The summons directing Sonko to appear before the Head of Serious Crime Unit Kuria Obadia at the DCI headquarters along Kiambu Road were issued last week. He was supposed to give his side on the matter.

This was after Kibicho recorded a statement with the DCI distancing himself from the remarks made by Sonko at a rally in Dagoretti South, Nairobi.

Sonko alleged that he and Kibicho were part of those involved in the hooliganism witnessed in Nairobi as ODM supporters protested.

But Kibicho has since obtained orders stopping Sonko from continuing to mention his name in relation to the disruption of ODM rallies after the 2017 election.

High Court Judge Msagha Mbogholi ruled that Dr Kibicho’s reputation and good public standing will continue to be damaged if the former governor is not stopped from uttering the false statements, pending the determination of the suit.

Dr Kibicho, through Senior Counsel Fred Ngatia, filed the application claiming Sonko uttered the false words on January 24 with the intention to injure the PS’s reputation.

“The libelous utterances against Dr Kibicho were not an isolated case but a continuation of sustained and systematic false, malicious and reckless statements the former governor has been making concerning the PS since 2017,” said Ngatia. 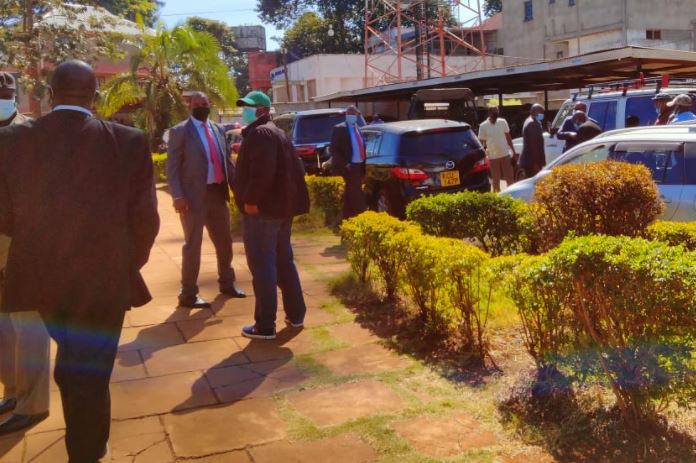 New York House member Ocasio-Cortez said she was harassed by those she identified as fans of former President Donald Trump for days before the Jan. 6

Hollywood pushes for an end to Kenya’s bootleg movies bonanza

US entertainment giants are fronting the enactment of tougher copyright laws as part of ongoing negotiations in the free trade agreement.

By Stephen Rutto | 16 hours ago