Speaking after a meeting with leaders from Northern counties over the rising insecurity, Matiang’i said their investigations so far pointed to the possibility of some leaders being involved in the killings.

“We are in hot pursuit of some people including leaders. It cannot happen that you murder security officers under the disguise of cattle rustling. We will arrest every one of them including leaders,” he warned.

The CS said the government does not take lightly the murder of police officers and has mobilised troops and resources to Wajir, Marsabit and Isiolo counties in a bid to capture the culprits.

“It doesn’t matter how long it takes to capture the perpetrators, we will get them,” the CS said.

Matiang’i implored leaders from the region to watch their words and avoid using inflammatory language while commenting on crucial matters.

“We have people to manage. We have a country to lead. We must remember we are a family,” he added.

He noted that Kenya had a tradition of witnessing intercommunal tensions especially when the country is headed towards an election cycle, some of which are politically instigated while others are in fight of resources between communities.

The Interior CS who was accompanied by his PS Karanja Kibicho, North Eastern leaders and county commissioners also claimed that several people in the area were illegaly armed. 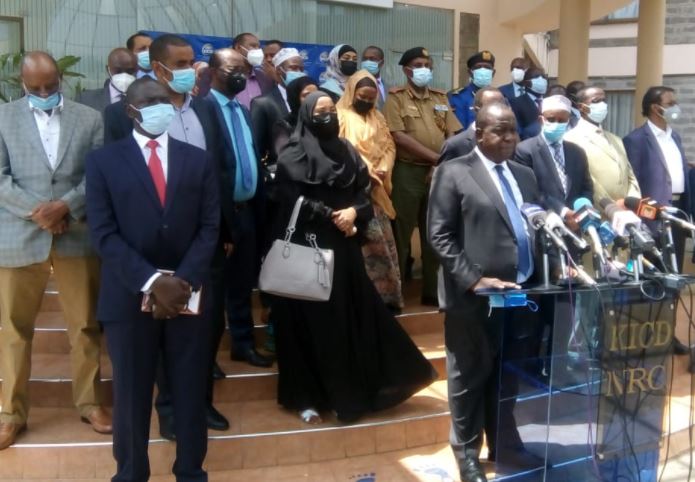 Garissa Governor Ali Korane reiterated his sentiments saying that the killings must stop.

“We are neigbours. We need to find solutions to these problems of pasture and water,” Korane said.

The Standard reported that three MPs-Ali Lokiru (Turkana East), James Lomenen (Turkana South) and John Lodepe (Turkana Central) found themselves in unfamiliar territory as the village was under siege by bandits.

Previous article
Thai woman sentenced to 43 years in jail for insulting monarchy
Next article
Love thy neighbour and get a Covid-19 jab, says Archbishop of Canterbury

Matiang'i: It is harassment