Radio journalist in search of justice after police assault

A day of laughter and joy for guests at an invite-only party in Nairobi's Kileleshwa estate over the weekend ended  in pain and tears.

A journalist was among 21 guests who were preparing to leave at 8.30pm on December 19 when hell broke loose.

About 50 police officers under the command of a senior officer based at the Nairobi area police headquarters descended on the guests.

The officers inflicted life-threatening injuries on at least six people who have since recorded statements with the police.

A video of that night's events doing the rounds on social media has caused an uproar, prompting Inspector General of Police Hilary Mutyambai to issue a statement denying allegations of brutality.

I am a skincare minimalist

Among those at the event was Angela Muiruri, a news anchor at Capital FM, who has taken her battle for justice to the office of Deputy Inspector General of Police Edward Mbugua.

The assault of Muiruri, a US citizen, has also caught the attention of the US embassy. Yesterday, Muiruri said she had received a call from embassy officials who took her statement and promised to follow up the matter with Mutyambai.

About 30 friends had been in the house for the better part of the day, wining and dining ahead of the Christmas celebration.

The news anchor was in the group of friends that were about to leave in order to beat the 10pm curfew time when about 50 police officers stormed the home.

Muiruri and others guests were ordered to sit on the floor. Everyone complied.

A stout man, who was in civilian clothes and who appeared to be the boss, bellowed a second order.

Everyone was directed to an open yard which is also the residence's parking bay. They all obliged.

The officer issued further orders that locals should move to one side and foreigners to the other.

The shell-shocked guests again obliged. It was now around 9.30pm.

The senior officer then suddenly turned to one of the women and whipped her, sending her sprawling on the ground.

Muiruri said she was lying down behind the woman who was whipped by the officer.

She knew she would be next.

She says she asked the officer why he was whipping the women yet they had complied with all the orders they issued.

As soon as she uttered those words, about 10 officers turned on her for having the audacity to challenge their boss. 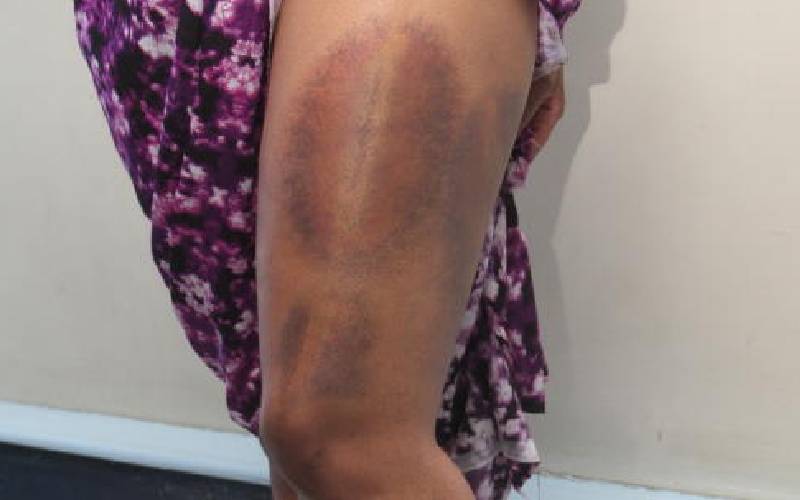 She said they kicked, slapped and whipped her as she wailed.

The officers were probably too busy beating Muiruri to notice one of the revelers was secretly filming the events of the night.

It is this video clip that has now put the spotlight on the brutality meted out to the revelers by the police officers.

The clip has since gone viral causing a public uproar on the conduct of police officers during curfew hours.

The guests were then ordered into a waiting police van and driven to Muthangari Police Station and locked up.

She says they were released on Sunday on a free bond but the officers at the station demanded Sh1,000 from each one of them.

After leaving the police cells, Muiruri started her five-day journey in search of justice.

Her attempts to file a complaint with the police over the assault failed and it took the intervention of Mbugua for her to file a report and be issued with medical documents that she will rely on in the event her matter goes to court.

Muiruri filed her complaint at KICC Police Station yesterday and she was finally given a P3 Form.

A medical report from the Nairobi Hospital where Muiruri received treatment states that she had suffered bruises on her lower limbs.

“I have never met such an aggressive cop. He is a misrepresentation of what the police should be," she said.

She said she would stop at nothing and was willing to face the officer who assaulted her in court.

Muthangari Police uproot bhang of a value is estimated at 1.5 million shillings in Lavington