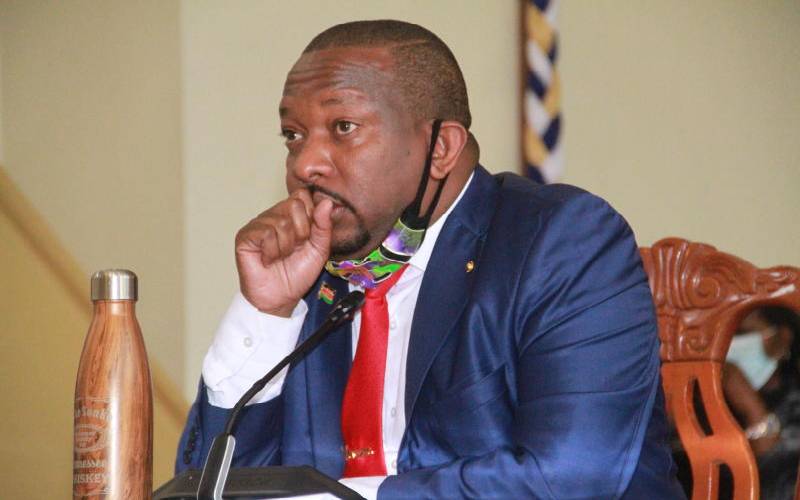 Nairobi Governor Mike Sonko (pictured) yesterday got a reprieve after a court stopped the county assembly from proceeding with a motion to impeach him.

Justice Nzioki wa Makau temporarily stopped the impeachment motion scheduled for debate tomorrow, on grounds that the governor will be prejudiced should the Members of the County Assembly proceed to impeach him before his case is determined.

“An order is hereby issued restraining the Nairobi City County Assembly from deliberating upon, debating, voting or passing any resolution on the motion tabled by Hon Michael Ogada for the removal of the petitioner as governor of Nairobi County,” ruled Justice Makau.

Ogada, who is the minority leader in the county assembly, last week tabled the motion to impeach Sonko on grounds of failing to approve the county’s budget and gross violation of the Constitution.

But the governor, through lawyer Harrison Kinyanjui, argued that the intended ouster motion was in violation of an earlier court order which stopped the process in February.

Kinyanjui told the court that Ogada’s motion was similar and raised same grounds as the one tabled by Minority Whip Peter Imwatok on February 20 but which was stopped by the Employment and Labour Relations Court.

According to the lawyer, the assembly intend to subject Sonko to questioning without evidence to support allegations raised against him and that his request to be furnished with documents they will rely on to prosecute him has not been met.

Sonko, in his affidavit to support the application, claimed the assembly has no power to remove him from office using unorthodox means after some MCAs disowned the signatures appearing on the impeachment motion.

Justice Makau directed the county assembly to file a response by today and schedule the hearing for tomorrow.

Yesterday, Mr Imwatok said the petition by Sonko to halt his ouster motion debate had been wrongfully filed seeing that it had been filed at the Labour and Employment Court and not at a constitutional court.

Veteran runners now own schools in their counties

Athletes race to invest in schools after track exploits