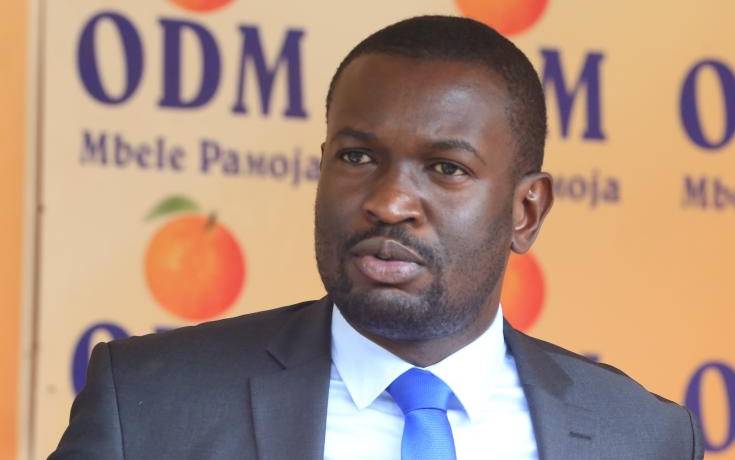 Through its Secretary-General Edwin Sifuna (pictured above) said the claims of theft of taxpayers’ millions were sensational and baseless.

In a statement, Sifuna said claims of misappropriation of funds can only be ascertained after an audit by the Office of the Auditor-General is carried out.

“We wonder how this can be so before a credible audit by the Auditor General is carried out to ascertain the veracity of these claims. The precedent has been set before, where the media goes on a sensationalist extravaganza, with half-baked information obtained from shadowy sources, ending up creating more problems than solutions,” said Sifuna.

“It is disheartening to hear no less a senior government official than the Deputy President go public with the juvenile and improper statement that "at least now nobody will blame me for stealing Covid-19 funds",” he added.

He hit out at DP William Ruto saying his statement suggested that it was okay for public funds to be misappropriated so long as it is not blamed on him.

“It expresses the jealousy of being left out of the gravy train. We have pointed out before that the DP's recalcitrance and lack of political emotional intelligence are a hindrance to the smooth running of government,” he added.

The party said Dr Ruto should be helping President Uhuru Kenyatta to crack the whip on corruption cartels within the Jubilee administration.

He went on, “We must ask the DP to either rise to the occasion and play the role of DP, or ship out and let the President work in peace.”

The party said it will continue to raise any concerns surrounding the expenditure of the Covid-19 fund, without unnecessary hubris.

“We will therefore not join the condemnation bandwagon, but will keep probing and defending the right of Kenyans to get government services efficiently and at the right process,” said Sifuna.

Kemsa board has since suspended the chief officer Jonah Munjari alongside Procurement Director Charles Juma and his Commercial counterpart Eliud Muriithi - in relation to among others, controversial Sh7.7 billion tender for PPE.

Ethics and Anti-Corruption Commission (EACC) is already investigating the suspended officials of the agency that has become the face of graft in the Covid-19 pandemic.

The agency's board has been dragged into the multi-billion irregular procurement of medical supplies.

It emerged during a joint Senate Health Committee and the Ad Hoc Committee on the Covid-19 that the board chaired by former Murang'a Senator Kembi Gitura was involved in running a “parallel procurement” process.

United States Agency for International Development (USAID) and the Global Fund have since threatened to withdraw up to Sh400 billion earmarked to support HIV/AIDs, Tuberculosis and Malaria over reports of alleged corruption.

By David Njaaga 7 hrs ago
Dance, vuvuzelas, and whistleblowing as Raila casts vote in Kibra