Kenyans on Twitter call for the arrest of Covid-19 ‘thieves’

The hashtag #ArrestCovid-19thieves was trending for the better part of Friday.

Kenyans on Twitter and other social media platforms went ballistic, over the arrest of several peaceful protesters, who were demonstrating, calling on the government to arrest those accused to have misappropriated public funds meant to fight the Covid-19 pandemic.

However, the activity which took place at the freedom corner in Nairobi only served to fuel a fire on twitter, with Kenyans condemning the police for arresting innocent civilians.

“Instead of arresting the Covid-19 thieves, they arrested peaceful demonstrators. The real thieves are at large,” tweeted one user, Sheila.

Several other Kenyans who stood in solidarity with the protesters, sounded the same beat, urging the government to arrest the right people.

“Stop the thieves, not the protesters,” another tweeted, who also posted a placard written ‘Stop Thieves’. 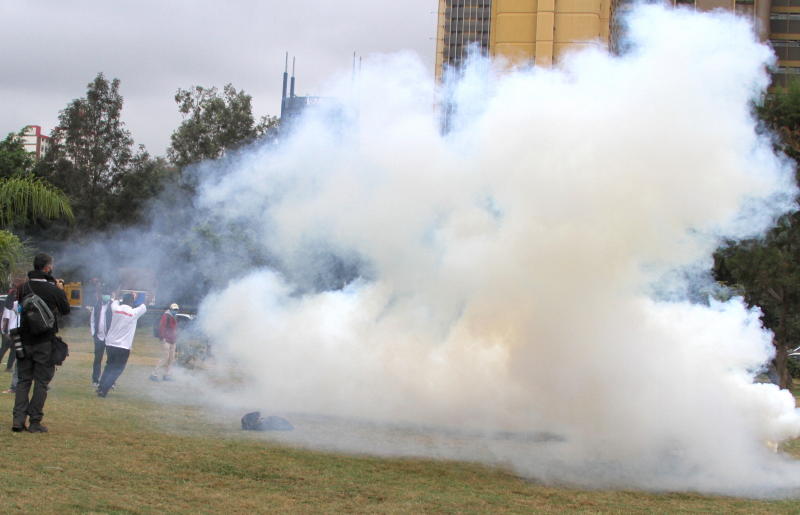 However, some chided the protesters, ridiculing the cowardice of many Kenyans in demanding for their rights, and the arrest of the suspects.

“Over 100,000 Kenyans want the government to arrest the Covid-19 thieves at KEMSA on Twitter. On the ground only 10 people are active,” said another.

The Kenya Human Rights Commission (KHRC), also accused the police of violating the constitutional rights of the peaceful demonstrators.

“Police have a duty to uphold the rights of anyone to assemble peacefully & engage in free speech. Kenyans have a right to protest government failure but people trying to reform this country are constantly faced with police violence,” read a tweet from its official handle.

The demonstrators who were calling for the immediate arrest of those accused in the alleged multi-billion scam were dispersed by the police, who lobbed teargas in the air and arrested some of them.

The police claimed that those who assembled were above 15 people, thus resulting in the violation of the Covid-19 protocols.

So far, the United States Agency for International Development (USAID) and the Global Fund, have threatened to withdraw their donations to Kenya over the alleged corruption case.

They expressed concern over Kenya Medical Supplies Authority’s (KEMSA) procurement, as well as management and implementation of the grants given to the institution.

KEMSA is said to be unable to find buyers for the items that were allegedly purchased at inflated prices and now many of them could be about to hit their expiry dates.

The Ethics and Anti-Corruption Commission (EACC) is currently probing the controversial Sh7.7 billion tender for the emergency procurement of Covid-19 Personal Protective Equipment (PPEs) which were to be delivered by July 22, 2020.

“Preliminary investigations have established that several senior officials of KEMSA engaged in irregular procurement of Covid-19 items through the issuance of commitment letters to suppliers above the approved budget,” said a letter from EACC CEO Twalib Mbarak.