Panic as six MPs admitted to city hospitals with virus 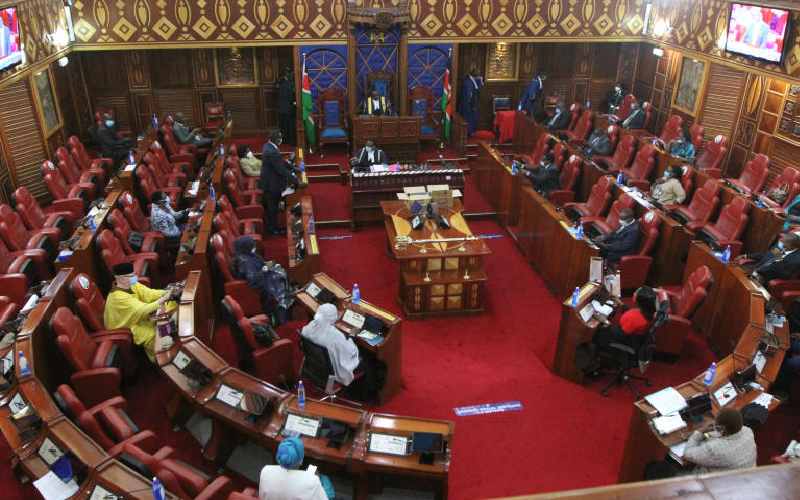 The lawmakers are admitted in different hospitals in Nairobi, with one said to be in the Intensive Care Unit (ICU).

Meanwhile, sources revealed that many other legislators who had come into contact with their positive colleagues rushed to get tested during the weekend, raising fears that the number of the positive cases could rise once their results are released.

Among those said to be in the hospital is a ranking member of the National Assembly, who by virtue of his office, is feared to have exposed himself to many of his colleagues, with confidential sources indicating to The Standard that more than 20 legislators had gone for tests after learning of his hospitalisation.

A first-time MP from western Kenya is said to have contracted the virus after interacting closely with the colleague who is in ICU, while another is a Coast MP.

“There is a major scare. Many of those who interacted with him have had to go for tests, and this figure might even be high by Monday (today) when the results of the majority who voluntarily did the tests are released.

“I know at least six MPs have so far turned positive and are in hospitals, one is in ICU,” an MP who spoke on condition of anonymity, not to be seen as discussing the health status of his colleagues, told The Standard.

Clerk of the National Assembly Michael Sialai said that the National Assembly'sadministration was not aware of any Covid-19 case among the MPs or members of staff, but added that since medical matters are a private affair, they would not know unless the affected publicly disclose their status.

Mr Sialai said it was possible for legislators to privately undergo tests and not disclose, and as such, Parliament may not know of such cases.

“If true, it would be a matter of great concern, but as of now, there is no report made to us of any case,” Sialai said.

The clerk said they have been ensuring that the regulations put in place to avoid the spread of the virus to Parliament are strictly followed, revealing that they had been regularly disinfecting the institution’s critical areas such as the chambers, committee rooms and offices.

“We understand the great risk we are in, given that MPs travel widely and that is why, as a routine, we ensure that there is thorough disinfection, including spraying those areas frequently visited.

“We did it even on Friday; sanitising all critical areas, including the mosque and worship rooms,” the clerk said.

The spread of the virus to Parliament could slow down the efforts to contain the virus and stop its spread to counties given that legislators are often travelling from Nairobi to their constituencies, always interacting with their voters.

The ripple effect that would be occasioned by Covid-19 cases in Parliament could lead to the closure of the august House as has happened with State House where President Uhuru Kenyatta has been forced to operate remotely after four staff members tested positive.

In April, after Kenya had reported its first few cases, National Assembly Speaker Justin Muturi was forced to adjourn the sittings so the administration could put in place measures to prevent the transmission of the virus.

Sialai says the regulations are still in place, with the MPs having to contend with the social distancing rule which has seen more spaces created outside the chamber to accommodate legislators who cannot find space inside the chambers.

Still, in April, several MPs were forced to self-quarantine after they interacted with Rabai MP Kamoti Mwamkale who had tested positive.

In the Senate, several senators, including the Minority Leader James Orengo and the Minority Whip Mutula Kilonzo Jnr, had to undertake tests after they interacted with leaders from Kilifi County, who were suspected to have been positive.

Political leaders have recently come under attack from Kenyans, especially on social media, for violating regulations set to combat the spread of the virus, as pictures have been emerging of them holding political gatherings, often without observing the social distance rule.

Jubilee Party undertook a highly interactive purge of its House leadership at the peak of the infections.

The process included three parliamentary group meetings, two held at State House and one at the KICC.

In the buildup to these meetings were other planning, lobbying and intercessory meetings which further put MPs at greater risks.

Last month, photos of politicians ignoring the social distance rule while being hosted for lunch by Central Organisation of Trade Union Secretary General Francis Atwoli sparked an uproar on social media, attracting condemnation that the political class was “preaching water while drinking wine”.

Mr Atwoli, however, dismissed reports the gathering flouted Covid-19 safety rules, saying his guests were all tested by two medics deployed at his Kajiado home before the meeting.

Last week, the police teargassed separate meetings by Bungoma Senator Moses Wetang’ula and another by Malava MP Malulu ingendi in Malava, Kakamega County, for fear that they were hosting gatherings where social distancing could be observed.

Wetang’ula had done a triumphant entry into his county after the Registrar of Political Parties (RPP) Ann Nderitu handed him the leadership of the party after a brief ‘ouster’ by Kanduyi MP Wafula Wamunyinyi.

A number of MPs, including Wetang’ula, had planned to gather at the home of Malava MP to discuss strategy on the party’s political direction ahead of the 2022 presidential election.

A big crowd formed outside the MP’s home as the politicians arrived.

They were placed in quarantine for 14 days before they can be allowed to go home.

By Mate Tongola | 12 hours ago