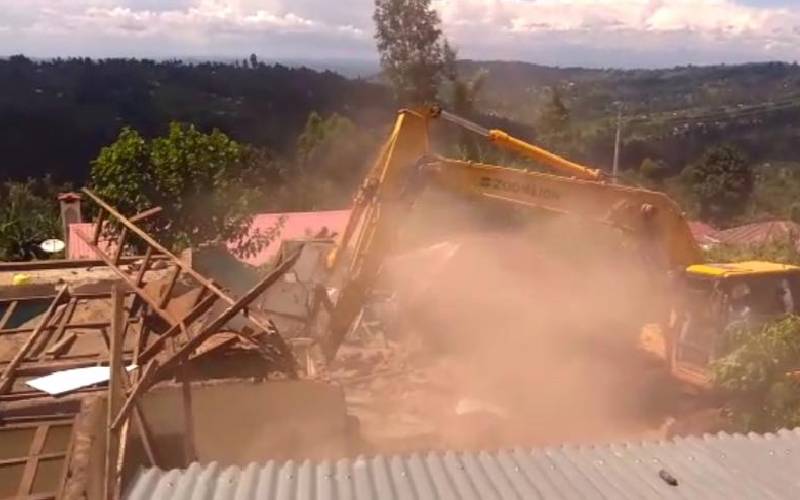 A court has thrown out a petition by 23 residents of Nyama Villa estate who had sought to block their eviction from a 20-acre land in Komarock estate, Nairobi.

Environment and Land court judge Benard Eboso’s ruling on May 20 effectively paves way for a second wave of demolition of some 600 buildings on the land at the centre of a dispute between Muthithi Investments Limited and the residents, who insist they are owners through adverse possession.

The court ruling now heightens anxiety for the applicants whose memory of bulldozers tearing down their houses on December 19, 2018 are still fresh.

The judge dismissed two petitions seeking to have the judgement declaring Muthithi Investments Limited as the owners of the land set aside.

One had been filed by residents of the disputed property and a second by the Nairobi County Government which sought to be enjoined in the proceedings.

The residents were seeking orders to suspend their eviction insisting they had not been notified.

Bernard Mutaha, in his affidavit, said that Muthithi Investments started the evictions in compliance with Land Act that made it mandatory for the eviction notice to be in writing and placed in five conspicuous places. He said since they were a large group, the notice should have been published in the Press.

The group also asked the court to award them compensation for damages during the eviction in December 2018 which they said was unlawful.

The dispute over the land goes back more that 15 years when the first case was lodged over the ownership of the 20 acre prime land.

After a 10 year dispute, Justice John Mutungi on May 13, 2014 ruled that Muthithi Investments were the owners of the land and directed the applicants to vacate. The company was also awarded Sh1m as general damages for trespass.

On September 17, 2018, the court gave Wiskam Auctioneers the green light to evict the trespassers and demolitions were started in December but halted after the applicants moved to court.

Justice Eboso ruled that the residents had trespassed and were disobeying a court order by staying on the land. He said Justice Mutungi's judgement remained unchallenged since the applicants had filed an appeal and abandoned it.

“Without saying much, evaluated against the background, this application is a blatant abuse of the process of the court. The court would be appending a thumb of approval to impunity if it were to grant a stay order to a litigant who has blatantly elected to disobey a court order that he has not challenged through an appeal,” Justice Eboso ruled.

Muthithi Investments Limited's lawyer Ochieng Oduol argued that the company held a 99 year lease for the land that was issued by the defunct City Council.

They said dispute over the ownership between the company and City Hall was settled through consent entered on February 8, 2000 and the signing of the lease a year later.