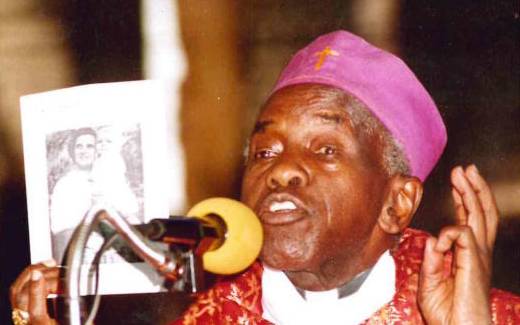 The late retired cleric (above) was laid to rest in a crypt in the basement of the church in the Nairobi CBD, which served as an area of his jurisdiction from 1997 to 2007 when he retired.

The burial was done after a low-key funeral mass at the church which was attended by various leaders, close family members, and bishops and priests.

John Cardinal Njue led a short mass as the mourners observed the social distancing directive issued by the government to combat the spread of coronavirus.

Mourners sat at-least one-metre apart from each other. They also had their face masks on as they followed the proceedings.

The clerics conducted the mass and only allowed a message from President Uhuru Kenyatta who sent his condolence message and apologies through Kennedy Kihara, an officer from the Office of the President.

“We had arranged for him to speak to us through video link but technology failed us last minute. That is when he sent me to come and relay his condolences,” said Kihara.

Uhuru said that he would set a day that the life of late retired Archbishop would be celebrated.

Before the burial, the clergy directed that only bishops would be allowed at the site of internment after the mass.

Born on December 25, 1931, in Myanyani village, Mwala location, Machakos County; Fr. Ndingi served in the priesthood for close to six decades after living his teaching job as a P3 teacher.

He was credited for having fought for the oppressed in the society and playing crucial roles in the development of education-Mangu and Loreto secondary schools being cases in point.

He has also been hailed as a charitable cleric who helped victims of hunger and drought especially during the 1999 famine which ate up sections of the country.