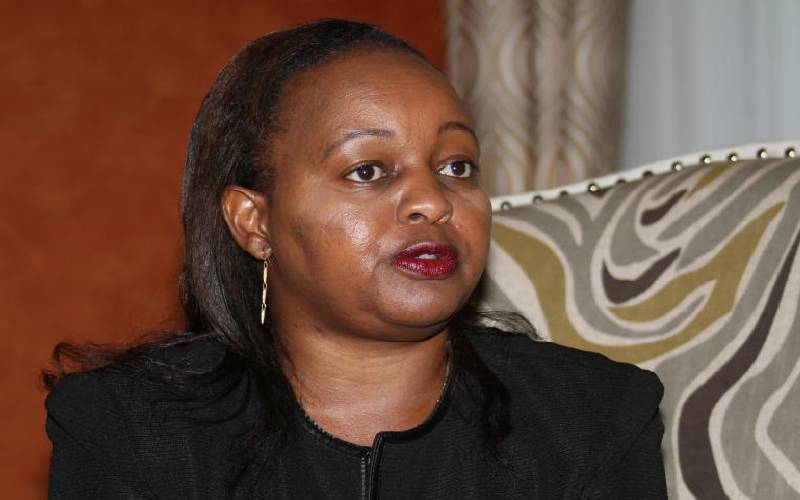 After being mentioned in the controversial song Wajinga Nyinyi by King Kaka, Kirinyaga Governor Anne Waiguru (pictured) has ordered the artiste to pull down the song from all social media platforms and apologise to her in writing or face legal suit.

Through Kiragu Wathuta & Company Advocates, Waiguru gives the rapper 48 hours to issue an unconditional admission of liability in writing, apologise in writing and delete the song failure to which she will move to court to sue for defamation.

She also demands for retraction of the song and an unconditional commitment not to release any further defamatory song against her.

Governor Waiguru has said the song's release occasioned "grave, irreparable and permanent damage" to her reputation and accuses King Kaka of tarnishing her name to increase his popularity and profits.

“You offer full unconditional admission of liability in writing where after the quantum damages to our client shall be pursued,” read the letter.

Waiguru released a litany of demands to the artiste which she wants met by Wednesday December 14, 2019 failure to which she will sue for damages.

Apart from a legal suit and damages, she also threatens to seek orders for the immediate closure of King Kaka’s twitter account.

According Waiguru, the remarks about her in the song are highly defamatory and depict her as corrupt and having engaged in the theft of public funds at the National Youth Service (NYS).

She said King Kaka has painted her in bad light and suggest in the song that she is not fit to be the Kirinyaga Governor and that she was elected as a result of taking advantage of people's gullibility.

She says these notions lower her regard and esteem as held by the public.

“You ought to have known that despite extensive investigations and several prosecutions in relation to the loss of funds at NYS, our client has never been charged in a court of law as an accused person in relation to NYS or any other scandal ...,".

Waiguru also warned the media through the Media Council of Kenya against publishing, airing or disseminating the defamatory song.