The President will tomorrow present the report to Kenyans at the Bomas of Kenya, Nairobi. Kenyans are expected to read it and give their views.

Already Jubilee and ODM legislators have invited selected people to attend the launch.

The ODM party was even compelled to cancel the launch of its party headquarters in view of this development.

“Due to the State event on the BBI scheduled for tomorrow (Tuesday) at State House, Nairobi, our scheduled event to inaugurate the new headquarters and launch digital membership registration has been pushed to Thursday. Invited guests are reminded to carry their cards to the event,” the party said yesterday.

BBI at a glance

After the March 2018 rapprochement between Uhuru Kenyatta and Raila Odinga better known as the Handshake, the President and the ODM leader announced  their plan to bury the rivalry through the formation Building Bridges Initiative.

On May 31, 2018, Uhuru gazetted the members of the Task Force which comprised 14 members. 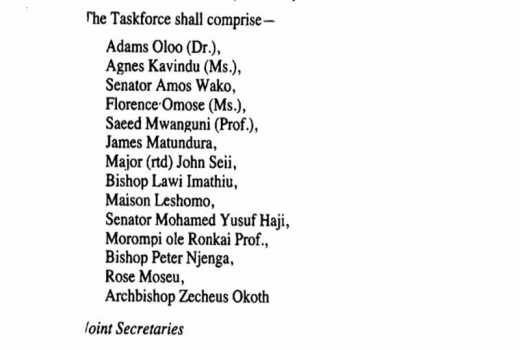 The BBI task force was chaired by  Sen.Haji who was deputised by  Dr Oloo. Lawyer Paul Mwangi and Amb Martin Kimani were the joint secretaries of the task force team.

The team concluded public participation by October this year and was expected to present the report to the President in early November. This, however, took time and generated more political heat between Jubilee factions allied to the president and his deputy.

As BBI supporters who included ODM party members and Jubilee Kieleweke side waited with bated breath, the pro-Ruto Tanga Tanga side rubbished the report as dead on arrival. Some BBI critics even alleged that the President might have read the mood of the country and realised that the report would be rejected hence the alleged reluctance to receive it.

The long wait was interrupted by the Sagana Lodge meeting, a fortnight ago,  to which President Uhuru Kenyatta summoned all the Mt Kenya leaders.

During the meeting, BBI took centre stage as Uhuru persuaded the leaders to wait for the report without having and drop their predetermined positions.

In the meeting, Uhuru reportedly picked a team of politicians from the region to drum support for the BBI. The team included Nominated MP Maina Kamanda and Kirinyaga Governor Anne Mumbi, who is also leading a group of BBI-friendly women leaders called Embrace.

Meanwhile, ODM leaders including Raila Odinga and Mombasa Governor Hassan Joho, have been in the forefront championing for the positive reception of the report.

“The Building Bridges Initiative(BBI) is a way of fostering unity and achieving peace and cohesion in our country. I believe this noble initiative will be one of the surest ways of building a prosperous Kenya,” Joho tweeted after addressing Taita Taveta County Assembly Members on November 21, 2019.

Premium My mum's death destroyed me: Ex-TPF star David Ogola speaks on alcohol addiction, rehab
News
By Solomon Koko
13 mins ago
45 days to GO: Brazil will be top-ranked team at World Cup in Qatar
Football
By Associated Press
53 mins ago
What leaders of majority and minority will earn
Explainers
By Standard Checkpoint
1 hr ago
Baby girl, condoms are cheaper than diapers
BLOGS
By Diana Makokha
1 hr ago
.

By Associated Press 53 mins ago
45 days to GO: Brazil will be top-ranked team at World Cup in Qatar