In a statement to newsrooms, IPOA has promised to make appropriate criminal and disciplinary recommendations to the Director of Public Prosecutions and other relevant government agencies.

“Pursuant to its statutory mandate under section 25(1) of IPOA Act, the Independent Policing Oversight Authority on its own motion immediately launched independent investigations into the incident to unravel the circumstances that led to the fatal shooting,” read the statement in part.

Upon conclusion of the investigations IPOA has promised to absolve the officers implicated accordingly if they not found culpable. 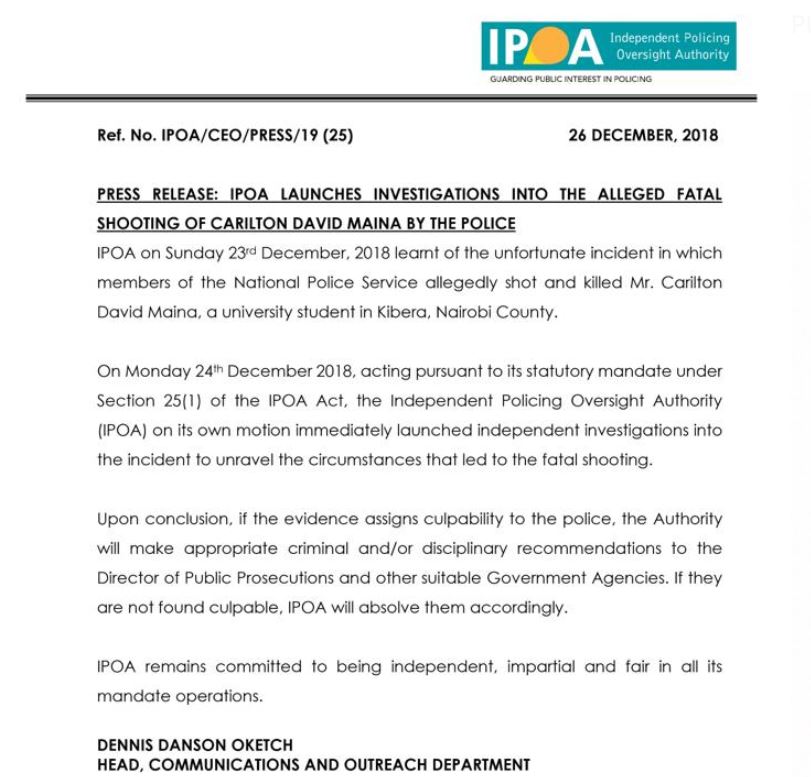 But according to Kilimani OCPD, Michael Muchiri, the deceased was part of a four-member gang that was terrorizing members of public while armed with a homemade pistol and knives.

Upon getting reports on the incidents, police rushed to the scene and gunned down one suspect, arrested one other male aged 20 years, while the rest are reported to have fled.

“Police on patrol received a call from the members of the public who said that they were being mugged by a group of youths. It is then that the police acted and shot one on the spot arrested another while the other two fled. The body of the deceased was moved to city mortuary awaiting postmortem,” said Muchiri.

Carilton’s friends took to social media to refute claims that he was part of any gang.  He is said to have been a student at Leeds University in England.

“He came home for the December holidays and would have gone back to England in January if not for his life being ended by the split second speed of the bullets and the ravenous interests of the police. He had just come from watching a football match in the nearest movie shop, being a fanatic football fan and as a matter of fact a potential goalkeeper,” said Collins Onyango on Facebook.

“A student at the University of Leeds in England was gunned down at Line Saba estate in Kibra, Nairobi county, in what police claim he was part of a group of thugs who were terrorizing area residents. Carilton David Maina, 23, met his untimely death while on his way back home after watching a football match at a nearby movie shop,” read another post by Robert Omondi.

5 books every entrepreneur should read in 2019

You can choose to learn by your personal experiences through trial and error until success is achieved.