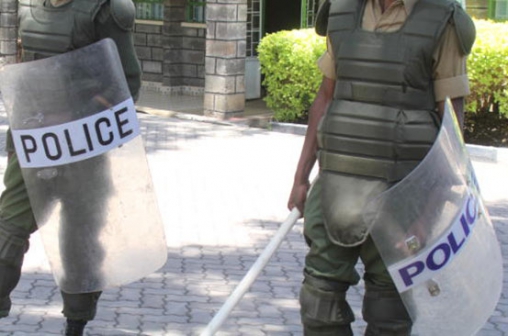 NAIROBI: Five police officers and a civilian were Friday night arrested in Nairobi over claims of extortion and kidnap.

The officers had held hostage a Chinese national and demanded Sh1 million from him before they could release him.

The victim works with the Standard Gauge Railway project.

Police say the officers and a taxi driver arrested the Chinese from Makongeni area on claim he did not have a valid work permit. The officers are attached with Railways and Makongeni police stations respectively.

The family of the Chinese reported the matter to Thika police station before a team was dispatched to Nairobi and arrested the six at Muthaiga police station where they had driven to on realizing they were being trailed.

Officials said the suspects were operating in two vehicles while making calls to the family and friends of the victim before the matter was reported to police.

It was then that a team trailed them from Jogoo Road, City Centre and to Muthaiga police station where they drove to and tried to book the Chinese on claims he was in Kenya illegally. At that time, the Thika team arrived and declared their interests before the five and the taxi driver were arrested.

The suspects were later taken to Thika for further grilling before appearing in court.

Kiambu County police commander James Mugera said the suspects are being interrogated before further action is taken on them.

Another officer said they are investigating to establish if the crime is rampant in the SGR project.

Cases of police being involved in crime are on the rise. On Friday, another officer attached to Thika police station was arrested in the town after being found with an elephant tusk. His colleague escaped on foot when Kenya Wildlife Service officers struck at a petrol station where they had parked their car waiting for a buyer of the ivory. Police said the officers wanted to sell the tusk whose value is yet to be disclosed. The officer was moved to Lang’ata police station ahead of his arraignment on Monday.

Euro 2016 is one of the most competitive soccer tournament’s since most of the countries have well-structured soccer frameworks which is evident courtesy of their youth systems and soccer leagues which are not only the best but also competitive.