IEBC: Why we threw out Okoa Kenya 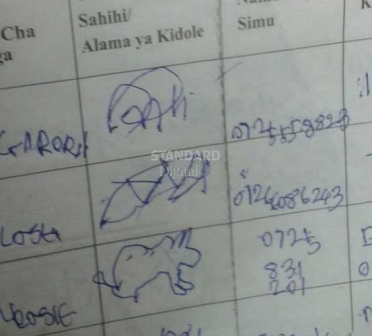 The electoral commission has revealed why it trashed the Okoa Kenya initiative.

Explaining the process of verification of signatures for a referendum, the Independent Electoral and Boundaries Commission (IEBC) revealed that some sections of the Okoa Kenya booklets had incomprehensible writings and drawings.

The commission defended itself against accusations of being an appendage of the Jubilee administration in the execution of its mandate. The Opposition had claimed that the fate of the Okoa Kenya referendum signatures was sealed courtesy of a conspiracy between the ruling coalition and the commission.

IEBC Chairman Issack Hassan, in a 24-point statement yesterday, said that despite unrelenting bashing from various political stakeholders, they would remain in office to deliver on their mandate as provided for in the Constitution. IEBC officials insisted that they would not bow to pressure to quit.

"We have become a punching bag of political parties. It's like if this party is tired, the other one starts. We will not run away from our responsibilities," said Mr Hassan.

CORD leader Raila Odinga said a fresh electoral body was required because IEBC had been compromised.

"IEBC should be disbanded immediately to ensure a level playing ground in the next elections. As it stands, IEBC is serving the interests of Jubilee," he said.

He spoke outside the Malindi Police Station, where he had led other CORD leaders to stand in solidarity with governors Hassan Joho (Mombasa) and Amason Kingi (Kilifi), who were summoned by police over their role, if any, in the Malindi by-election violence (see separate story).

"The Government cannot win the (next) election. It is the people who win an election and CORD stands with the people," Raila said.

In Nairobi, Hassan's team maintained that the Okoa Kenya initiative promoters had no option but to seek a fresh mandate from the people to come up with a million signatures if they intended to proceed with the referendum push.

According to the commission, the promoters of the popular initiative cannot bridge the gap by topping up over 140,000 signatures.

The commission explained that when it received the draft bill and a bundle of 217 booklets in hard copy on November, 9 last year, it reviewed the status of the records and acknowledged every booklet by stamping on every page and designing the methodology to be followed in verification.

Hassan said before embarking on the exercise, the commission requested Treasury for funding to facilitate the recruitment of at least 100 data entry clerks for a 30-day period, training of clerks, hiring of the venue and security among others. Treasury approved the request for allocation of Sh24.4 million.

The terms of reference for the project team was to oversee data entry from hard copy to soft copy, provide quality assurance during the process of data entry, organise and archive the booklets, compile the final report of the verification and make recommendations.

The 100 clerks were required to key in the name and ID numbers of each supporter in a prescribed Excel sheet.

After the data contained in all booklets were entered, this was handed over to the commission's ICT team for verification.

At the preparatory stage and during the data-capture process, the project team observed that the format in which Okoa Kenya submitted the records was inconsistent.

The team noted that some of the booklets were hand-written while others were typed. Out of 217 booklets, 172 were handwritten, 43 printed while two books were both printed and handwritten.

The project team also observed that the number of columns was not the same in all booklets, with 43 appearing to have been based on IEBC's voter register. The formats and number of records in the booklets were different, and serialisation of the booklets was inconsistent. Many booklets had entries that were illegible due to poor handwriting while others had entries that were not signed.

Ten of the 28 children who were paralysed after receiving injections at Akichelesit Dispensary in Busia County have now developed more health complications.