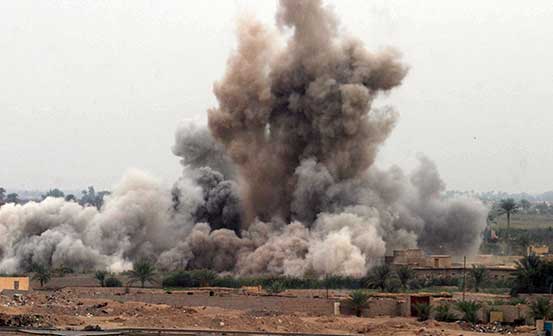 Mogadishu: Somalia's government on Thursday requested an explanation from the United States after Somali officials said a U.S. "friendly fire" air strike killed at least 22 soldiers and civilians in the Horn of Africa nation.

Officials in the semi-autonomous, northern region of Galmudug said a U.S. air strike killed members of its forces this week and accused a rival region, Puntland, of duping the Americans into believing those targeted were Islamist rebels.

Washington said the United States carried out a "self-defence air strike" after Somali troops faced fire from militants. It said nine al Shabaab militants had been killed but that it was looking into reports others may also have died.

"The cabinet requests the U.S. government give a clear explanation about the attack its planes carried out on the Galmudug forces," the government statement, signed by Mohamed Omar Arte, said.

It also urged both Galmudug and Puntland, which have often clashed over territory in the past, to mend fences. Protests erupted in Galkayo after the U.S. strikes, with demonstrators burning U.S. flags and chanting anti-American slogans.

The United States, a major donor to Somalia's government in Mogadishu, has often bombed al Shabaab militant positions and commanders in its bid to support the government and help the nation rebuild after two decades of war.

In a separate statement, Somali General Ali Bashi said the Somali military had confirmed that members of the Galmudug forces and civilians were killed in the strike, describing it as a case of "friendly fire".

The general also said al Shabaab was not in the area, confirming the al Qaeda-affiliated militants' earlier claim that they had no forces there at the time of the attack, which occurred overnight from Tuesday to Wednesday.

Tuchel, Conte clash as Chelsea, Tottenham draw 2-2 in EPL
Football
By Associated Press
45 mins ago
Bangladesh refuses to become China's lackey despite being part of Belt, Road initiative
Asia
By Agency
52 mins ago
Narok governor results to be declared at Bomas
National
By Betty Njeru
2 hrs ago
List of elected governors
National
By Standard Checkpoint
4 hrs ago
.

By Associated Press 7 hrs ago
Fire at Coptic church in Cairo kills 41, hurts 14

By The Conversation 2 days ago
Not yet uhuru: African Union has had a few successes but still weak