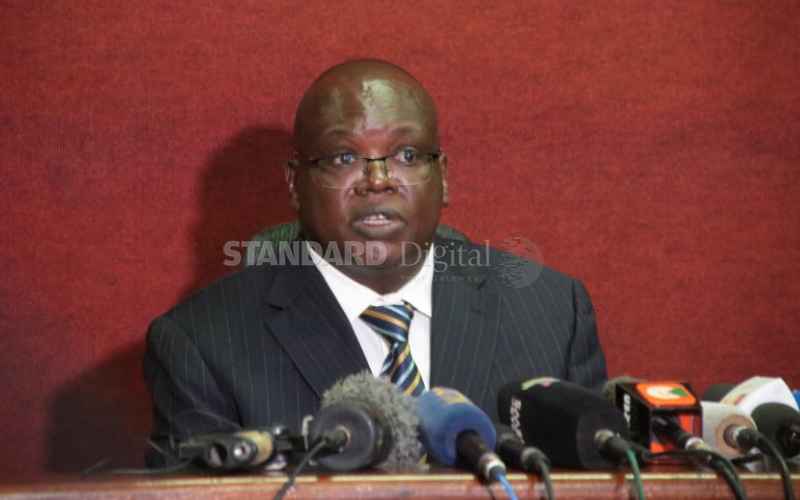 A court deferred the case in which a man is accused of Sh944 million land fraud after his lawyer said the suspect had contracted Covid-19.

Milimani Chief Magistrate Francis Andayi (pictured) directed that Patroba Odoyo appear before him on April 6 to answer to the charges alongside Peter Gitau, Peter Njoroge and Hoops Shihemi.

“I will allow the application and defer plea taking to allow one suspect to heal,” Andayi directed.

Odoyo’s lawyer, Emily Nyongesa, explained that Odoyo is in an isolation centre after he contracted the disease.

The four had been initially charged separately for forging ownership documents of an 11-acre piece of land in Donholm. Shihemi is a former Kayole chief.

They are accused of attempting to defraud MS Gidjoy Investments Limited by forging documents to show they owned a parcel of land.

The criminal case is a culmination of a series of court battles over the same parcel of land. In 2019, Shihemi alongside others filed a constitutional case against the Attorney General, while Soweva Self-help Group filed another case against National Lands Commission and Gidjoy.

In the case against NLC, Gidjoy explained that it bought the land from Continental Developers Limited before armed gangs invaded it and subdivided the parcel amongst themselves.

Justice Kosy Bor, ruled that the fact on who owned the land would be determined in the case filed by Gidjoy against Zero Point and 69 others.

Kositany claimed his letter was rushed, that it was dated 2020 instead of 2021.

The late MP is survived by his widow and six children.

By Harold Ayodo | 2 hours ago