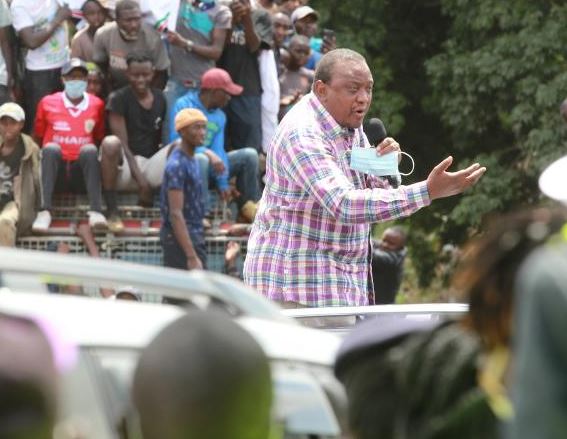 President Uhuru Kenyatta (pictured) yesterday launched the Boda boda Investment Scheme that targets the 1.4 million riders across the country to save billions of shillings annually.

The scheme was unveiled following the signing of an agreement between the Boda boda Safety Association (BAK) and commercial institutions, including Capital Markets Authority, Rubis Energy and NABO Capital.

Members of the scheme will be required to channel Sh50 daily to the scheme as savings.

The riders will also benefit from a Sh3 discount for every litre of fuel they buy at Rubis Energy. The amount will be channeled to the scheme as part of their savings.

Other benefits riders will get include training, legal representation and investment opportunities.

Kenyatta described the sector as “a sleeping giant that only needs to be awaken” while asking the riders to work towards pulling their resources together for a greater economic goal.

The president said there are about 1.4 million riders who support nearly 10 per cent of the country’s population either directly or indirectly.

“As an industry, you are important to our emerging economy. The boda boda community carries approximately 22 million people a day, that means close to a half of the people use this means of transport,” said Kenyatta.

To illustrate his point, the president said the 1.4 million registered riders in the country collect an average of Sh980 million daily, which amounts to Sh6.8 billion in a week.

“The boda boda business supports directly or indirectly 5.2 million Kenyans who depend on the business. In every ten Kenyans, one makes their livelihoods from the sector,” he added.

He said the sector generates approximately Sh357 billion annually, which is more than the amount the national government allocates to the 47 counties every financial year.

“Everyday you are collecting an average of 980 million shillings. If you are able to collect nearly a billion everyday, why are riders still complaining of poverty. I don’t know if there is any industry that makes that kind of money,” he added.

The president assured the sector of his support in assisting them realise their dream of improving their living standards.

He, however, warned them against handouts and being used by the political class for its selfish gains.

“If you are treating yourself as someone with no value, that is how the world will treat you. You’ll end up being misused,” Kenyatta said.

He narrated his experience with a section of boda boda riders he interacted with while on a tour of Kisii.

Kenyatta said how the riders rejected his idea to support their Sacco financially and instead asked for handouts.

He said the incident could be as a result of lack of trust in the running of Saccos, where officials disappear with members’ savings.

He asked officials of the newly launched scheme to build trust among its members so that they can be willing to make their daily contributions.

“As leaders, we have to cultivate the culture of integrity and trust for this to work. The more you create the ability for those you lead to trust you, the more they will be able to trust you with their resources,” Kenyatta said.

The event was also attended by the association’s chair Kelvin Mubadi, and all the 47 chairpersons from across the country.

Mubadi said the launch of the investment scheme has been a journey of many years.

“The reason we are here is to start a journey of transformation so that our youth are not misled,” Mubadi said.

“Today we are here to sign an agreement that will see their savings protected,” he added.

He said the 1.4 million riders contribute heavily to the economy, with the annual revenue estimated to be more than Sh300 billion.

He said the initiative is aimed at empowering the riders so that they can go into more lucrative ventures.

The association declared its support for the Building Bridges Initiative and Huduma Namba programme.

“We are going to mobilise and support you. We have taken time to work with the government. Interior Cabinet Secretary Fred Matiangi has given us an office to operate from,” Mubadi said.

Football players' cars set on fire after loss in Argentina
Football
By Associated Press
48 mins ago
IEBC limits access to Bomas of Kenya
National
By Stephanie Wangari
53 mins ago
Conceding after losing is graceful and classy
BLOGS
By Cosmas Butunyi
1 hr ago
List of elected MPs
National
By Standard Checkpoint
1 hr ago
.