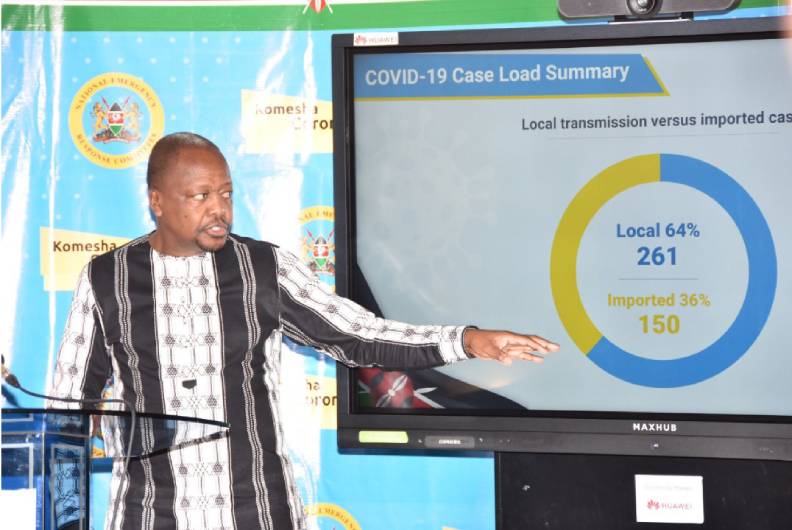 Six weeks since the first positive coronavirus case was reported in the country, Kenya now has 411 confirmed cases. Today we reflect back, taking stock of the numbers and trends of the deadly virus in the country since day one.

From the 411 infections, the Ministry of Health statistics shows that 7 out of 10 people are asymptomatic. Meaning 71 per cent of those infected did not show any  signs of the Covid-19. 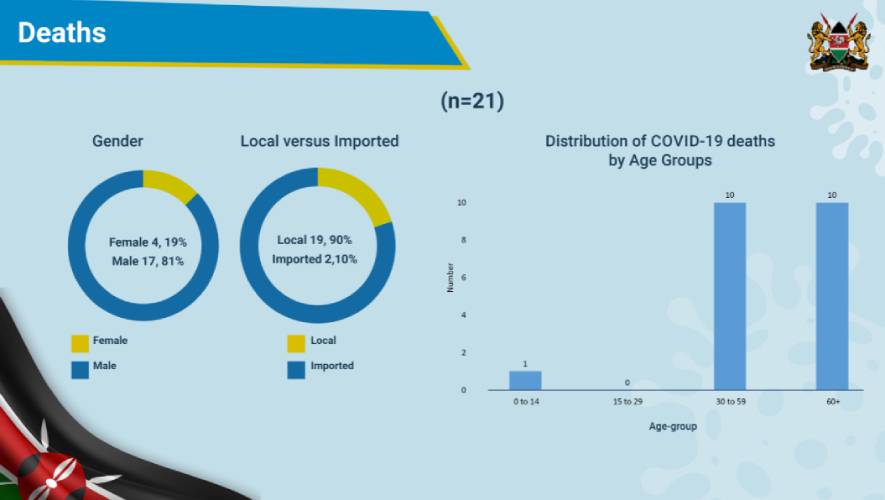 The death rate in men is however extremely high. 17 out of the 21 people who have died from the virus are men. This equaling to 5.1 per cent fatality rate.

Scientists say most men have underlying illnesses such as diabetes and high blood pressure among others. Drinking and smoking have also been floated as some of the lifestyle behaviors causing the disparity in genders.

Good news is, 150 recoveries have been reported out of the 411 positive cases in the country. This representing 36.5 per cent recovery rate. Correspondingly, health workers are keeping tabs on 240 active cases.

Globally, 3.4 million people have been infected, with about 240,000 fatalities being recorded. Recoveries have topped slightly over 1 million people. USA, Spain and Italy make the top 3 most impacted countries in the world, cumulatively, making over half of the global infections.

In Africa, 25,000 cases and 938 deaths have been registered. However, the death rate in Africa is slightly lower at 3.4 per cent. South Africa, Egypt and Morocco lead the infections chart in Africa. Tanzania’s 480 cases make it the highest in East Africa. Kenya, Rwanda and Uganda follow each other respectively.

Further, 14 counties have been gravely affected. Particularly, Nairobi and Mombasa counties which account for 91 per cent of the total cases. They have 248 and 124 cases respectively.

The red-light situation has been linked to the high population in these densely populated counties. This has made social distancing a challenge.

Kawangware slum is leading with the number of coronavirus cases in Nairobi. 13 people have been identified as coronavirus positive cases making the area a Covid-19 hotspot in the city. 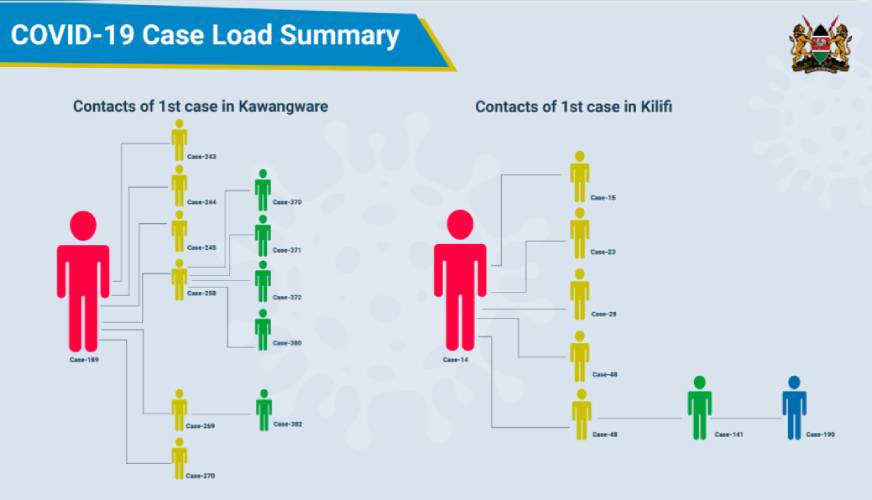 The trend forced the Ministry of Health to put Kawangware on the radar due to the recent surge in the coronavirus cases. Mass testing has already kicked off in the area.

“Kawangware is an area under surveillance. We have identified markets as one of the areas of transmission and we will deploy surveillance team to different zones so to interact with public, ensure social distancing, show people correct ways of putting on masks,” CS Kagwe said.

Other areas that have been adversely affected by the deadly virus in Nairobi include; Eastleigh (11), South C 7, Pipeline and Kilimani which have 6 cases each making the top 5 most affected estates in the Capital. Nyali, Mvita and Likoni are the major hotspots in Mombasa County.

Other counties which are on partial lockdown such as Kilifi, Mandera and Kwale have 9, 8 and 2 cases each in that order. The numbers have since been curbed by the order of cessation of movement in and out of those counties.

Kiambu, Kajiado, Kitui, Nakuru, Siaya and Kakamega. Uasin Gishu, Homabay and Wajir counties have also been hit by the pandemic. Kiambu and Machakos counties are rapidly emerging as hotspots due to their closeness to Nairobi County.

In the same way, the trend of infection has also gone down after the daily nationwide night curfew was declared. The cases however rose after those who were put in isolation were tested. The curve however seems to be on a plateau.

Majority of those infected are between the ages of 30-59. The distribution of the cases by age is also lowest between 0-14 years. There is however, only one death in the 0-14 age group. 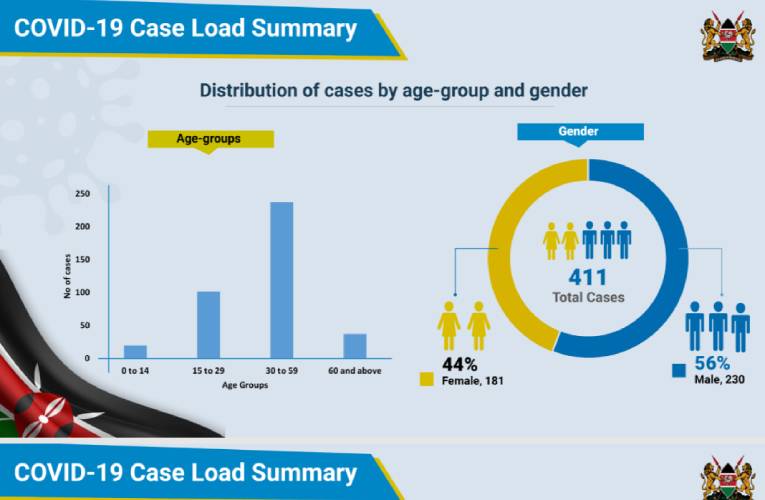 The youth between 15-29 years have not registered any fatalities. However, CS Kagwe says they are the ones spreading the disease more. Nearly half of the deaths emanate from those aged between 30-59.

The number of imported cases has also gone down drastically. 64 per cent (261 people) have contracted the disease locally, while 150 people, have imported the disease. This is slightly above one third of the total cases.

This is as a result of the banning of international flights in and out of the country, which was announced after the cases pandemic hit the country. All passenger flights were grounded except for cargo planes and those evacuating foreigners.

Kenya had on April 6, 2020 extended the ban for another 30 days in a bid to contain the importation and spread of the coronavirus. The extension expires next week.

"We have extended the ban on international flights for 30 more days with effect from April 6. Evacuation and cargo flights are exempted from this ban. However, evacuation flights must give advance 72-hour notice," said Transport CS James Macharia.

Most of the local cases have been as a result of contacts from people who are positive from the disease. For instance, 11 cases from Kawangware are from one patient. This is a clear proof of the critical role of social distancing.

“This is what we mean when we talk about the fact that one individual is crucial, and these are real numbers,” he added.” This is a call for action, if you live in Kawangware, you should be aware that the person next to you could as well be positive.”

The government had issued directives on social distancing and wearing masks in order to contain the pandemic. The guidelines are also in tandem with those by the World Health Organizations (WHO).

The CS also, in one of his statements urged Kenyans to stay at home to prevent the spread of the disease, "Because people are not going to their jobs, no party, and no bar, where are you going? Stay at home," he said.

The government had predicted over 10,000 cases by the end of last month, but lack of testing kits has crippled the testing process. Nevertheless, the testing capacity has gradually increased.

The government procured more testing kits to add to those which were donated by well-swishers such as Chinese philanthropist Jack Ma. Recently, the Ministry of Health received 200,000 testing kits to help in testing. 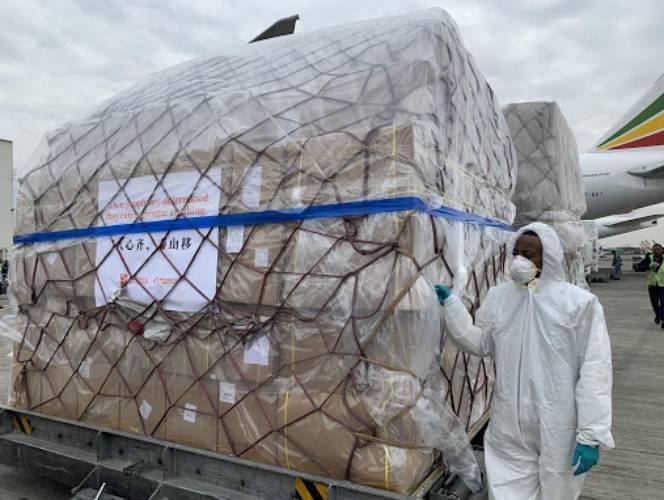 “These 200,000 sampling tubes are key to our ability to mass test Kenyans. Without these sampling tubes we would not be able to start our mass testing, but with these tubes we are now able to fast track,” said Kagwe.

The country started with two testing labs in Nairobi and the number has increased to 15 operational labs, both in public and private facilities. Up to date, 21,700 people have been tested.

Some of the testing facilities include; The National Public Health Laboratories, Kenya Medical Research Institute (KEMRI), Lancet, Aga Khan Hospital and Nairobi hospital among others.

The government now has initiated a raft of measures planned ahead this month, in efforts to combat the pandemic. MoH is already rolling out targeted mass testing in hotspot areas, eateries and among truck drivers.

The current travel restrictions will also continue. This includes, apart from the daily night curfew, the cessation of movement into and out of Nairobi, Mombasa, Kilifi, Kwale and Mandera County.

The government also aims at increasing the production of Personal Protective Equipment (PPEs) such as gloves, masks, gumboots among others, in order to protect the health workers as they fight the lethal disease.

Medical practitioners and non-health care practitioners will also receive more training in order to build their capacity to test.  The labor force will then help in creating awareness about the pandemic.

The government still urges Kenyans to remain vigilant in order to bring down the coronavirus numbers even further this month, in efforts to level the Cocid-19 curve in the country

Countries must ease lockdowns slowly, be ready for virus to jump back - WHO

“So we are very anxious that we can move to a situation where the disease can kept under control with less severe measures,” he said. 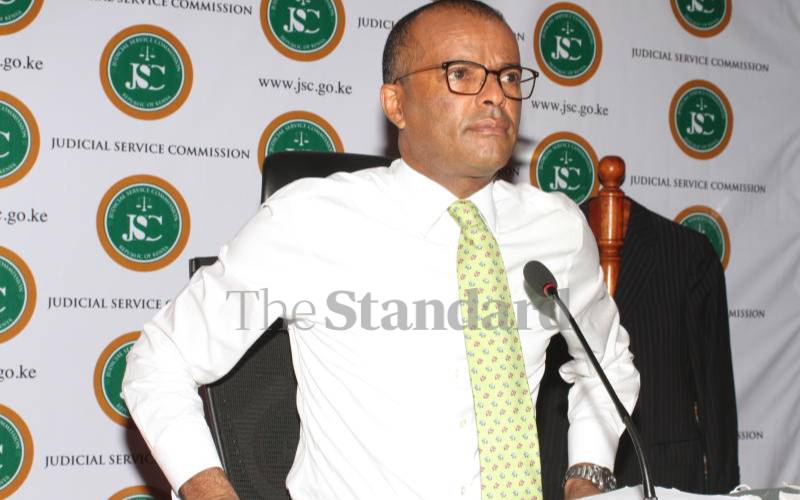 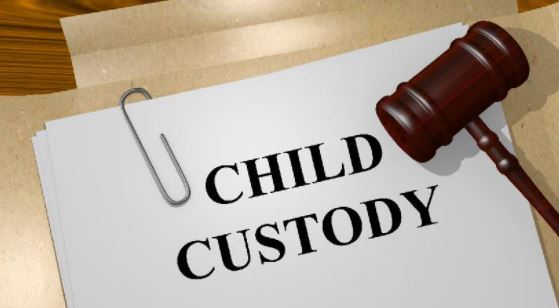