Over the past few weeks, national security units have shipped in massive equipment such as crowd-control vehicles, guns and tear gas to deal with any mass protests after August 8 elections.

The timing and the type of hardware being shipped in point to an assessment by the security forces that there could be violence after the announcement of the results of another hotly-contested election between the incumbent President Uhuru Kenyatta of Jubilee and National Super-Alliance flag-bearer Raila Odinga.

That security forces will not leave anything to chance is attested by the ongoing training of security personnel in Embakasi, Nairobi, in rescue operations and crowd control using the latest technology and methods.

Also in a no-nonsense statement, Inspector General of Police Joseph Boinnet, warned those who will engage in violent activities: “We are ready and waiting for you!”.

Signs that the forces have picked intelligence and are bracing for possible heady days ahead was discernible from the fact that the national elections body in its estimate has asked for at least 150,000 security officers to be deployed on election-related duties.

At least a dozen new South Korean made riot control vehicles arrived in Nairobi at the weekend, increasing to more than 30, the number of water canons for police use to quell chaos.

The fleet of new armoured vehicles with advanced features is in addition to a new consignment of anti-riot gear including teargas canisters, batons, anti-riot wear and guns that have come through the port of Mombasa.

Security sources explained the new anti-riot gear has been distributed to various parts of the country in the past month alone as authorities prepare to secure elections and deal with violence should it break out.

State agencies have mapped out 30 counties as election violence hotspots.

The new fleet is manufactured by Jino Motors which on its website prides itself with specialty in production of “world class highly effective riot-control vehicles without fatal blow.”

Various security units have been training jointly on crowd control and how to crush riots with authorities keen to ensure the killings and destruction witnessed in 2007 doesn’t recur.

The Standard team, last week, witnessed the security teams training at the Embakasi Military Base where they have simulated various situations, including response to civil unrest, terrorism and other forms of insecurity.

The essence of the training organised by the ministries of Interior and Defence for the multi-agency team “is to ensure rapid and co-ordinated response.”

The programme is dubbed Exercise Dumisha Utulivu is being conducted at the Humanitarian and Peace Support School in Embakasi. Officials say the training will enable the officers understand the role of the recently formed National Multi-Agency Coordinating Centre,

The officers will also be equipped to understand the chain of command from the strategic down to the tactical level models.

But questions have been raised on whether the scale of the arming of police could lead to use of lethal force in the event violence occurs.

More than 1,000 people were killed in ethnic violence following the disputed 2007 presidential election, with police blamed for the shooting to death of at least 400. More than 500,000 were displaced during the chaos.

The new anti-riot vehicles have the capacity to carry 9,000 litres of water and are fixed with various riot control mixing stuff including foam, tear gas and paint that stick to and single out protestors running away.

The vehicle, according to the manufacturer’s website, has capacity to mix the chemical from the cabin while water gun shooting.

It has a nozzle of shooting distance of minimum of 25 metres and maximum 70 metres with an elevation of 90 degrees and rotation of 320 degrees. Each of the new trucks has two water cannons on top of the cabin.

It also has a fully automated and centralised control system, a cabin protector and can carry seven crew at a time.

Other features include run-flat tyre so that it can drive under damaged conditions for 50km at 50km per hour. It also has Cabin Pressure Control System for increasing the pressure of the cabin to keep external gas out, ventilation and air pressure control.

Tonnes of tear gas canisters are also among resources that have been mobilised and sent to various places ahead of the polls.

The tear gas canisters were sent on lorries to various places perceived as hot spots to help in dispersing crowds in case of violence.

Security chiefs have identified various conflicts that are a risk to national security. These include cattle rustling, terror attacks, protests and riots, ethnic clashes and conflict between herders and farmers over scarce resources.

Given that the 2017 General Election is attracting unprecedented competition among political parties and aspirants at both grassroots and national level, there are more fears of violence.

Senior police officers are being reshuffled as part of efforts to bolster operations.

A meeting of senior police commanders is scheduled for Thursday in Nairobi to fine-tune their plans for the elections.

Boinnet said they are ready to provide security during the polls, even as the European Union observer teams warned there is a possibility of violence breaking out.

Boinnet said his regional commanders have been holding regular meetings to review their plans and exuded confidence they are now ready for the polls.

“NPS is ready and prepared to provide a safe, secure and peaceful environment for Kenyans to participate in the 2017 elections,” he said.

Boinnet also assured that police will be neutral during the period.

“We are set. We are up to the task. We are satisfied with the security arrangements so far and wish to assure Kenyans no (security) agent will be partisan. We will be non-partisan,” he said.

He made the remarks amid concerns there would be challenges in many parts of the country and especially in Northern Kenya and Lamu where Al Shabaab militants have been staging attacks, killing and displacing many.

Boinnet explained they have been working with IEBC to know where to deploy officers and the numbers.

“We have mobilised all needed logistics that will enable us provide a secure environment for the polls. We assure all they will vote,” he said.

The logistics include helicopters, vehicles, boats and other anti-riot gear that will help them manage rowdy crowds.

Other insiders said there is increasing fear among police officers that there could be an outbreak violence before or after the polls, given emerging events in the country.

NPS is mobilising helicopters from other agencies to respond to any violence within the shortest time possible.

Police have three working helicopters and will arrange for more from Kenya Wildlife Service, Kenya Pipeline, KenGen, Kenya Power, Kenya Forest Service and other agencies to move troops and other resources to places of need.

More than 5,000 vehicles have since 2013 been leased for police at an undisclosed cost and most of them will be deployed to cover the polls. Further, several government agencies have been ordered to surrender their vehicles to police ahead of the elections.

Whereas there are about 100,000 police officers, IEBC says it needs at least 150,000 security officers for the exercise.

The rest will be sourced from Prisons, National Intelligence Service, Kenya Wildlife Services, Kenya Forestry Services and National Youth Service but they will have to be gazetted as special police officers.

IEBC Chairperson Wafula Chebukati told a forum they are in the process of training security officers on election management in a programme being undertaken in partnership with security agencies while affirming IEBC’s readiness to punish those who contravene the electoral code of conduct.

He said that 600 officers have already been trained and that a similar number to follow. The programme will continue until at least 150,000 security officers are trained and deployed across the country.

“This programme will see a total of 150,000 officers cascaded down to the ground for purposes of polls. We want to assure you there will be security throughout the country,” Chebukati said.

Before he died, Interior Cabinet Secretary Joseph Nkaissery said all the security agencies have been sensitised to facilitate the security and integrity of the elections.

Nkaissery further said that 29 counties with a higher likelihood of violence had been identified and adequate measures put in place to pre-empt occurrences of unrest during the electioneering period.

This is where insiders say these water canons will be sent.

For instance, at least three canons will be sent to Uasin Gishu. “We have mapped out security conflict hotspots and developed focus mitigation strategies.

“We’ve identified particularly 20 counties and therefore women candidates in those counties will be given security based on the situations obtaining in specific hot spots,” explained Nkaissery during a meeting in Nairobi.

“It will help them plan and conduct time sensitive response to incidents during electioneering period,” he added.

By Andrew Kipkemboi | 15 minutes ago

By Caroline Chebet | 15 minutes ago 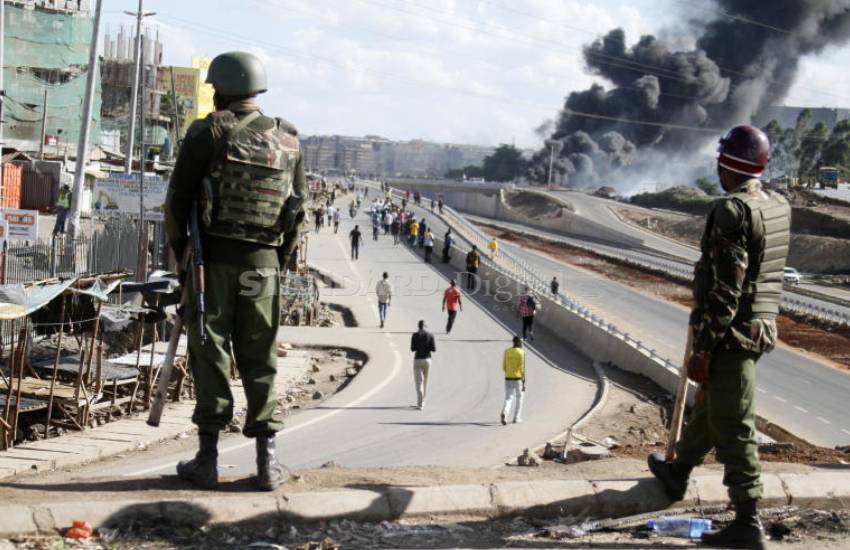 Provost reflections: What ails Kenya most is lack of integrity
Feedback