IN THE SUPREME COURT OF KENYA

Communications Commission of Kenya & 5 Others v. Royal Media Services & 5 Others

This case was triggered by Kenya’s decision to move from analogue broadcasting to digital broadcasting. The heart of this case is whether the Communications Commission of Kenya (“CCK”) lawfully and constitutionally allocated a Broadcast Signal Distribution (“BSD”) license to Pan African Network Group Kenya Limited (PANG) a company that is wholly owned by foreigners. The Court was also asked to determine whether CCK, infringed on the fundamental rights of local media houses, Royal Media Services Limited, Nation Media Group Limited and Standard Media Group Limited (NATIONAL SIGNAL NETWORKS) when it denied the latter a BSD license.

The case is however not limited to the issuing of licenses, but touches on matters of fundamental importance for Kenyans and hard-fought for freedoms. Specifically, the case is grounded in the rights of freedom of expression, media freedom and the right to access information. These rights guarantee debate and provide an opportunity for citizens to know what their Government is doing, but also to contribute to it by voicing support or opposition. It is within this context that the facts and findings of this Court will be summarised here.

The High Court held that NATIONAL SIGNAL NETWORKS was not entitled to a BSD license merely because they were established media houses with substantial investments in broadcasting infrastructure over the years. The Court also held that the implementation of the digital migration did not violate their fundamental rights and freedoms. They appealed to the Court of Appeal.

The Court of Appeal ruled that because NATIONAL SIGNAL NETWORKS had invested extensively in the broadcast industry they had a legitimate expectation to be given the BSD licenses. On this basis the Court of Appeal ordered that an independent regulator grant the respondents a BSD license and revoked the BSD license that had been issued to PANG. It is against this judgment that the appellants filed the appeal to this Court.

The main argument before this Court is that the body that makes decisions regarding BSD licenses must be independent. This is a mandatory requirement in Article 34 of the Constitution. The requirement of independence is vital to ensure that licensing procedures are independent of control by Government, political or commercial interests. In light of the history of corruption, cronyism and State patronage that attended the licensing of frequencies for radio and TV broadcasting, this independence must be jealously guarded and is constitutionally protected. Independence is a shield against influence or interference from external forces and the Constitution requires that the entity 3 | P a g e

deciding on licensing must be seen to be carrying out its functions free of orders, instructions, or any other intrusions from those forces.

The NATIONAL SIGNAL NETWORKS argued that CCK was not independent as it consisted of Government officials and was appointed by Government officials. The Court considered that Article 34(3) of the Constitution guarantees the freedom of establishment of broadcasting and other electronic media, but subject to licensing procedures that are necessary to regulate the airwaves and other forms of signal distribution. The Court concluded that CCK was legally mandated to issue the BSD licences even after the promulgation of the Constitution 2010, since the Constitution did not contemplate a vacuum.

The Court however concluded that when CCK was making the decision to issue the BSD licences it failed to take into consideration the imperatives ofnational values and principles as decreed in Article 10 of the Constitution. CCK’s decision to exclude the Royal Media Services Limited and Nation Media Group Limited on a technicality was not in line with the constitutional values, it chose to be constrained by the technicalities of procedures as if this was an ordinary procurement of goods and services.

Another aspect that was raised before this Court was the issue of legitimate expectation. NATIONAL SIGNAL NETWORKSargued that they had been promised a BSD licence in both the ICT Policy of 2006 adopted by Kenya and by the Permanent Secretary in the Ministry of Information and Communications in a speech he gave at a media gathering. The Court rejected this argument as the granting of licences is a function vested in CCK by law. To suppose that Government may direct its operation with regard to any of its functional responsibilities would be to usurp the role of CCK, in contravention of the law. The Court foundthat a licence can only be allocated through the legal provisions that guide such a process and cannot be the result of a promise made or perceived to be made by an official who does not have the statutory powers. On this basis, the Court rejected the argument of legitimate expectation. 4 | P a g e

The Court also considered the arguments that as NATIONAL SIGNAL NETWORKS chose not to exercise its right to appeal against the Tribunal’s decision to the High Court, the decision of the Tribunal became final. The effect of this is that NATIONAL SIGNAL NETWORKS cannot relitigate an issue which has been determined finally. The underlying principle is that judicial and administrative decisions are to be treated as final as it enhances fairness, upholds the integrity of the Courts and the administration of justice. Furthermore, the relitigation of issues that have been previously decided by an appropriate forum, may undermine confidence in procedures otherwise fair, and of integrity – by creating inconsistent results, or unnecessarily duplicative proceedings. On this basis the Court concluded that NATIONAL SIGNAL NETWORKS wasrelitigating the denial to them of a BSD licence and were asking the High Court to re-determine this issue.

The Court emphasized the provisions of Article 10 of the Constitution which lays out the national values and principles of governance which are binding in the interpretation and application of the Constitution and in the making and implementing of public policy decisions. These national values and principles include patriotism, the rule of law, participation of the people, equity, transparency, accountability and sustainable development. The Court stated that sustainable development requires the CAK to balance the public sector, the local private sector and the international sector interests when considering applications for BSD licences. The Court noted with concern that although SIGNET, a subsidiary of Kenya Broadcasting Corporation (KBC), was granted a BSD licence based on KBC’s role as the public broadcaster SIGNET has yielded its licensed operations to private corporate entities, a decision that defeats the public interest considerations upon which SIGNET was founded. The Court urged CAK to consult with the government to address this conundrum. The Court emphasized the responsibility of state organizations to protect our national interests. Thus, SIGNET must meet its public obligation to remain the public broadcaster. To this end the Court recommended that the Government support the public broadcaster through adequate legal, financial and technical support. 5 | P a g e

The Deputy Chief Justice in her concurring opinion emphasised the importance of the elevation of judicial review to a constitutional level. She held that the issuances of licences under Article 34(3), in this context, is an administrative action that should adhere to the prerequisites of Article 47 of the Constitution. This Article calls for adherence to all the principles of fairness and administrative propriety. Therefore, the issuance of a licence must satisfy the requirements under Article 47.

The Court issuedproposals and orders. The proposalsincludedrecommending that Parliament consider environmental factors that should guide signal distributors in complying with Article 10(2)(d) of the Constitution – sustainable development which is one of the national values and principles of governance and Article 42 of the Constitution – which enshrines the right to a clean and healthy environment - of the Constitution. The Court also recommended that CAK ensure that the sale of Set Top Boxes (STBs), which are required by wananchi to watch the programs transmitted digitally, is open to competition. In this vein, the Court further recommended that the CAK consider requiring the BSD licencees to subsidize the cost of the STBs.

An official of an Islamic institution that was closed down three months ago in Machakos County by security officials has accused the Director of the Criminal Investigations Department Ndegwa Muhoro of maligning their name. 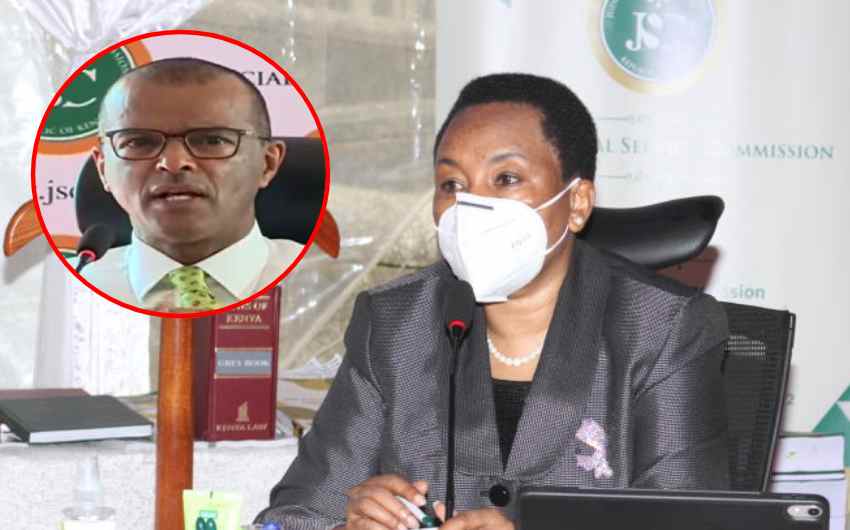 By Elaine Kirui | 5 hours ago