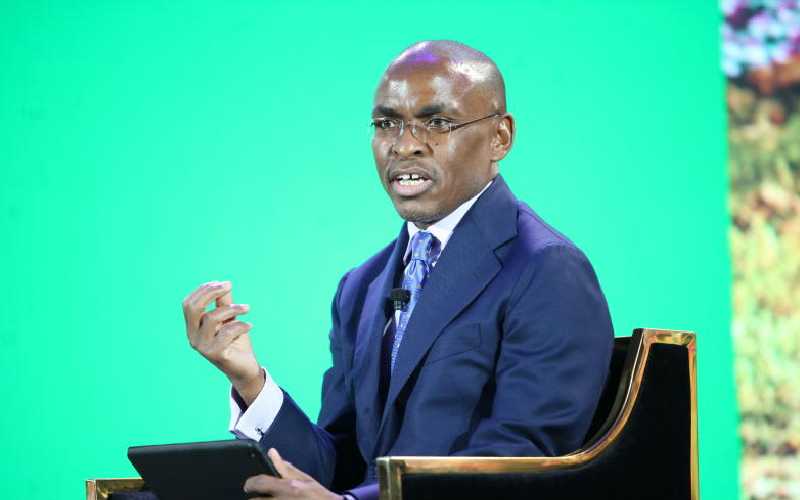 Seven months into the job, Safaricom Chief Executive Peter Ndegwa (pictured) still fights to be his own man, and rightly so.

Filling the giant shoes left by the two business titans who shaped the telco into a Sh1.2 trillion corporate behemoth is a tall order.

As he charts his vision for Safaricom, the domineering influences of Michael Joseph and the late Bob Collymore shadow his every move.

“People have asked me, how do you follow MJ (Michael Joseph) and the late Collymore,” said Ndegwa.

Inside Safaricom plan to take on tech giants with ‘super app’

“I kind of feel a sense of responsibility, but I also need to be myself. I need to lead as Peter Ndegwa.”

Last week, Safaricom hit 20 years. Ndegwa, who took over the reins in April amid the coronavirus uncertainty, is the man set to define the next chapter for East Africa’s most profitable firm.

But how exactly does he do this in light of what his predecessors achieved?

Ndegwa runs a firm that has since become woven deep into the Kenyan psyche, even forming part of the country’s lingua franca and most aspects of daily life.

There’s a generation that doesn’t remember Kenya without Safaricom.

At Safaricom’s 20th birthday celebrations, with the caution of a keenly watched man, Ndegwa laid out his vision for the firm and offered a glimpse into what the next decade might look like. Interestingly, Safaricom bosses seem to come in decades. Started in 2000, founding boss Joseph left in 2010 and handed over the mantle to the late Collymore.

He, however, came back in July last year as interim chief executive following the death of Collymore after a long battle with cancer.

During Joseph’s tenure, he was credited for key innovations such as M-Pesa and oversaw the company’s Initial Public Offer (IPO) when it listed at the Nairobi Securities Exchange (NSE). Many investors expected immediate share price rally, but it took a while before it climbed to Sh30.85 up from the IPO price of Sh5.

It was also an era that saw its share price hit an all-time high of Sh30 since listing in 2008.

Joseph is known for his straight-shooting style, while Collymore was the cool guy next door, who popularised jazz music and the arts. Ndegwa likes to keep off the limelight, burying himself in his work and eschews the media, something he might have to adjust owing to the nature of Safaricom’s business.

“I’m well trained, that’s why I can’t say anything. Also, Steve is sitting here looking at me,” Ndegwa brushed off a prying question from a journalist during last week’s 20th-anniversary celebrations in Nairobi.

He was referring to Stephen Chege, Safaricom Chief Corporate Affairs Officer, alluding to the fact that he had undergone intensive “coaching” on how to deal with journalists and field questions from investors.

Joseph, who describes Safaricom as his baby, is keenly watching from the sidelines, a fact that Ndegwa acknowledged.

“I always tell MJ I won’t be MJ, although we agree on many things,” he told a packed audience.

When Safaricom was being founded, Ndegwa was in the UK having just finished his postgraduate studies at the London Business School. Perhaps he never imagined in his wildest dreams that he’d someday run the firm which sold him his first phone when he returned to Kenya.

“At that time, having completed my postgraduate studies at London Business School, looking to a great career in future, I remember the younger Michael Joseph,” he said.

Collymore’s replacement, whose search had begun two years prior to his death owing to the illness, was bound to be difficult with a lot of interests at play from the shareholders.

Currently, the shareholding structure for the listed telco consists of the Kenyan government and South Africa’s Vodacom at 35 per cent, UK’s Vodafone at five per cent and a free float at 25 per cent. The government had been pushing for a local chief executive.

With Collymore’s appointment also, there had been a lot of intrigues.

Joseph last year opened up on the events leading to his appointment after a two-year search and the resistance to the choice. The Kenya Airways board chairman, who at some point broke down as he remembered Collymore, said after a decade at the helm of the telco, he’d gotten “bored” and knew the right time to pick a successor had come.

Joseph firmly believed that Collymore was the right man to steer the telco into the next phase. However, Safaricom’s board and senior people within Vodafone thought otherwise, feeling Collymore was too inexperienced.

He said his style of management – ruling with an iron fist – was no longer a fit for the company.

“My staff will tell you I’m not a believer in democracy. It’s my way or the highway,” he said during the telcos 19th anniversary celebrations last year.

Joseph said he was confident that Collymore embodied the DNA of Safaricom and would continue what he’d started.

Amid the intense scrutiny and unending comparisons, Ndegwa has proved a formidable corporate executive with a trail of success to boot. He describes himself as “customer-obsessed,” citing it as a key enabler of his vision for Safaricom.

“I’ve worked in business for a long time. It’s only by looking after our customers, anticipating their needs by serving them well that we can become a sustainable business. We are 20 years old and want to be 100,” he said.

Ndegwa joined Safaricom with experience of over 25 years, working for top multinationals across the world.

He was headhunted from global beer and alcohol giant Diageo where he served as managing director of Diageo Continental Europe, the first African to hold the position.

At EABL, which he joined in 2004, Ndegwa is credited for the development of an affordable beer strategy that became a top earner for the brewer.

He is behind the popular Senator keg. This understanding of the bottom end market is crucial. It is also what propelled Safaricom to profits, with the telco cutting a niche for creating products tailored for the common man since its early days.

For the next decade, Ndegwa said, the new vision for Kenya’s biggest telco is one of a “purpose-led technology company”. At the celebrations last week, he kept repeating the phrase “going beyond.”

Ndegwa wants to propel Safaricom beyond its core business of connectivity to a broader technology company crucial to sectors such as agriculture, health and education.

“We want to go into what we are calling new digital echo systems and empower farmers, policyholders in health and students,” he said. The firm is also set to employ advanced analytics and machine learning to “anticipate customer needs and target what they want”.

This decade might also see the telco expand regionally. Plans are already underway for Safaricom’s entry into Ethiopia, which is liberalising its telecoms sector. Here it sees a launchpad to Africa.  “In the next five years, we want to be known as an African brand that has gone beyond its origins,” said Ndegwa.

Another key area for growth, he said, is offering micro, small and medium enterprise support not only through business solutions, but also ICT such as the cloud or the internet of things (IoT).  Ndegwa, a certified accountant, inherited a well-established company.

As Kenya’s biggest telco, it enjoys a 65 per cent market share and serves 35 million customers. Amid claims of being a monopoly, and market rivals gaining an edge, Safaricom can’t sit pretty.

A scuttled merger between rivals Airtel and Telkom had been touted as a serious game changer. Though it insisted competition was not the reason, Safaricom last year renewed its strategy, including scrapping the expiry of data bundles, airtime for voice calls and text messages.

Observers will be keenly monitoring how Ndegwa further grows M-Pesa, which accounts for a third of the telco’s revenues. Last year, Safaricom launched Fuliza, an overdraft facility allowing consumers to complete M-Pesa transactions even with insufficient funds in their mobile wallets.

In the 2020 financial year, the telco disbursed loans amounting to Sh245 billion through Fuliza – a growth of more than 10 times over the same period in the previous year.

For Ndegwa, a key area to further grow M-Pesa is through the merchants and small businesses. He said before Covid-19, the money transfer service had 150,000 Lipa na M-Pesa merchants and is now about to cross the 250,000 mark.

In the coming days, Safaricom is set to release its half-year financial results, which experts project will jump 11 per cent driven by fixed service and mobile data revenue.

M-Pesa revenues are expected to decline by 4.3 per cent year-on-year, according to a forecast by KCB Capital. The fall is attributed to the zero-rating of person to person transactions below Sh1,000 – which end this year –  as well as zero-rated charges on hospitals and dispensaries and free bank to/from M-Pesa transactions.

Safaricom accounts for about half of the market share of incoming international money transfers. Ndegwa believes now is the time to take M-Pesa to the rest of Africa.

“M-Pesa has been primarily a Kenyan business with an international money transfer services arm. We want to make sure that it’s the financial services platform for Africa,” he said.

He also hopes to “democratise” M-Pesa payments, having enabled interoperability with various platforms such as Visa and also beefing up security and investing in future technology.

Another area is data, with Safaricom targeting to achieve a 100 per cent 4G access across the country by December and 100 per cent in 5G access in the next five years.

By Wainaina Wambu and Dominic Omondi | 5 days ago

This man Dande: Rebel on a mission or misunderstood?
Feedback