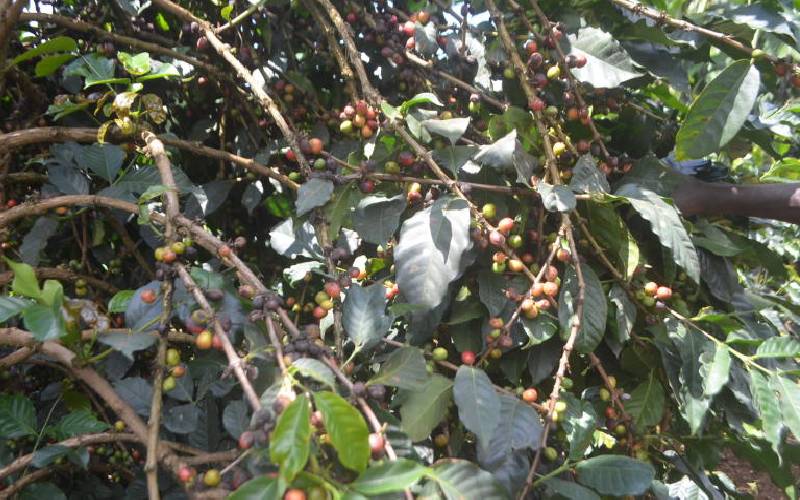 Rumukia coffee farmers have received a reprieve after the county government mediated a deal with Taifa sacco to restructure a Sh163 million loan.
The signing of the deal has given the farmers six years to pay back the loan and saved the coffee society's assets from the auction block after they defaulted on payments.
Speaking during the signing of the deal, Governor Mutahi Kahiga asked the Rumukia Society management committee to focus on increasing coffee production and winning back the confidence of the farmers.
"The county will provide extension services to the coffee farmers to increase production and quality," Mutahi said.
Kahiga said the county government would not interfere in the management of the society but would closely monitor the future dealings.
"What has happened to Rumukia should not be allowed to happen again, the law is clear that the borrowing power of the coffee society is vested in the management and they must be prudent," He noted.
Rumukia coffee society chairperson Paul Kariuki said the society had initially borrowed Sh40 millon to purchase a pulping machine.
"The first loan was for machinery but later on the loans were for paying farmers," he explained.
The society which has 4,500 registered farmers was set to lose all its properties and land belonging to farmers after they defaulted in making payments to Taifa Sacco.
Taifa Sacco chairman James Giting'a said it was unfortunate that the farmers who were also shareholders of the sacco would have lost their assets without the new deal.
"It was a very difficult situation for us and the farmers who have been a part of the society for years. We are now hopeful the society will make the payments on time as stipulated in the MOU," Giting'a stated.
Meanwhile, coffee production in Kenya is greatly constrained by three fungal diseases namely coffee leaf rust, coffee wilt disease, and coffee berry disease.

The fungal diseases, just like coffee, thrive in cold weather. Young berries are mostly attacked and it is likely to wipe out a farmer’s entire crop if not managed in time.

The extent of damage cannot be underscored as they can ravage yields to a farmer’s financial ruin.

Considering that fungal disease infestations depend on the environmental conditions farmers are supposed to be well prepared.

As climate changes, farmers need to watch out for various disease that can affect crop production, here are few guidelines every farmer should follow to manage these diseases.

Farmers have battled the disease for decades. It is common in warm and humid conditions of low altitudes. The disease is widely spread by wind and rains.

The leaves will have orange rust-like dust on the underside and defoliation.

Affected pants fruits will fail to ripen fully and after ripening they produce light beans which have a sour taste. It causes stunted growth of new stems hence reducing crop yields in the current season and previous.

It is a coffee tree vascular disease that blocks water and sap circulation caused by fungus. The leaves will start to fall, rust-like and premature ripening of the cherries. Premature cherries lead to acidity loss an increased bitterness.

It causes dark necrosis spots and premature drops on green berries. It is common in areas with high humidity, high altitudes and warm temperatures. According to green life crop protection Africa, the disease causes about 80 per cent crop loss.