Promising to fix the economy, he gave a hard-hitting speech that played up his legacy as finance minister in the 1990s and tore into the economic policies of the current government. He said if his Amani National Congress (ANC) party ascended to power, he would stem what he called a tide of economic mismanagement.

Mudavadi has teamed up with Kenya’s deputy president William Ruto as the campaigning for 9 August 2022 General election hots up.

In this fact-check, we highlight 10 claims Mudavadi made in his speech regarding national debt, mobile borrowing, stalled projects, legacy as finance minister, and agriculture’s contribution to Gross Domestic Product (GDP). His spokesperson Kibisu Kabatesi told Africa Check that all the data Mudavadi quoted was from “the one credible source of government data, the Kenya National Bureau of Statistics”.

Kenya’s parliament approved a debt ceiling – the maximum the country can borrow – of KSh9 trillion on 9 October 2019.

Africa Check has previously assessed claims about debt levels under the current Uhuru Kenyatta administration. Between March 2013 and November 2016, debt rose from KSh1.79 trillion to KSh3.8 trillion. Data from the Central Bank of Kenya (CBK) shows that as of June 2021, public debt was at KSh7.7 trillion.

We asked Benjamin Muchiri, a senior manager at Kenya’s statistics bureau, where to find the most recent debt data. He directed us to the national treasury.

The most recent quarterly economic and budgetary review, published in November 2021, showed the public debt on 30 September 2021 was at KSh8 trillion. But these figures are provisional. 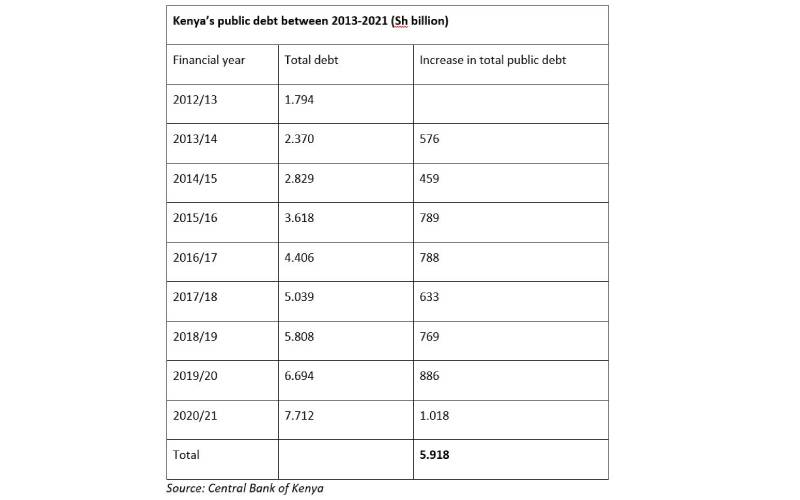 The treasury projects that by 2022/23 the country’s public debt will be at KSh9.4 trillion. Going by past trends and treasury’s own projections, debt levels have increased rapidly and could soon breach the ceiling. On this one Mudavadi was largely on the money. – Makinia Juma

For data on Kenya’s GDP, Muchiri directed us to the statistics bureau's annual economic surveys.

GDP is a widely used measure of the total value of goods and services produced in a country during a specific period, usually a year.

We therefore rate this claim as mostly correct. – Makinia Juma

Data on the revenue that was used to repay debt varied from year to year, according to John Kinuthia, a senior programmes officer with the Kenya office of the International Budget Partnership, a global budget transparency organisation.

“Even projections for debt payment in a financial year were different from what was actually spent,” Kinuthia added.

We have not seen any publicly available data that supports Mudavadi’s claim that for every KSh100 revenue collected KSh70 goes towards paying Kenya’s debt.

Fuliza is a service by mobile operator Safaricom. It allows subscribers to complete mobile money transactions even when they don’t have enough funds in their mobile money account – a sort of overdraft facility.

Safaricom’s most recent report covered the six months between April and September 2021. It showed that KSh242.6 billion (about US$2.1 billion) was disbursed using the service.

To get the daily rate, we divided this figure by the 183 days in that period. This worked out to KSh1.33 billion.

Mudavadi said Kenyans were “fugitives from Fuliza” after borrowing KSh351 billion (US$3.1 billion) the previous year.

Data from Safaricom showed that in the full year ending March 2021, KSh351.2 billion was disbursed through the service.

Mudavadi was correct on this count. – Tess Wandia

Before the Kenya Revenue Authority (KRA) was set up, taxes were collected by disparate departments of the national treasury.

The bill to set up the tax agency was introduced in the national assembly on 28 March 1995. Mudavadi served as finance minister from 1993 to 1997. According to the Hansard, a daily record of the assembly’s proceedings, he initiated debate on the draft law on 20 April 1995.

The law now stipulates: “There is established an authority to be known as the Kenya Revenue Authority” as the government agency “for the collection and receipt of all revenue”. The agency is under the “general supervision” of the finance minister.

The bill was signed into law on 31 May and took effect a month later. The tax agency records 1 July 1995 as the date when it was formed.

Following the 1997 General election, Mudavadi was moved to the agriculture ministry. The idea of setting up the stand-alone tax agency was part of the reforms, popularly known as the structural adjustment programmes, recommended by the World Bank and the International Monetary Fund. Kwame Owino, the chief executive of the Institute of Economic Affairs-Kenya, told Africa Check this.

While it would have been a team effort, Mudavadi as the political head for the finance ministry steered the bill that created the revenue authority through parliament. The agency was subsequently set up during his tenure when he had statutory oversight of its work.

Claim 7: I made [the] Central Bank of Kenya an independent entity

In a 2021 book he co-authored and co-edited, incumbent Kenya central bank governor Prof. Patrick Njoroge defined independence of central banks as the autonomy of the bank to do its work without political interference.

The book, 50 Years of Central Banking in Kenya, recorded that the Kenyan central bank’s independence was “grossly compromised” before the 1996 changes to the law that governed the bank.

Mudavadi was the finance minister in 1996 when these reforms took place. At the time the bank’s governor was Micah Cheserem who served between 1993 and 2001. In his book, The Will to Succeed, Cheserem said these changes were the cornerstone of the bank’s independence.

Cheserem also said he “teamed up with the then” finance minister “Musalia Mudavadi, to effect far-reaching economic reforms”.

“Our efforts to have CBK independence bore dividends following the enactment of the CBK (amendment) Act No.9 of 1996, which enabled it to enjoy a high degree of autonomy,” he wrote.

“Other important features of the CBK independence that arose from the amendments include limitation of the level of government influence in appointment procedures, terms of office and dismissal of the Governing Board of the bank.”

The national assembly’s Hansard shows Mudavadi initiated the debate on the bill to give the central bank autonomy on 20 November 1996. Further reforms came through the 2010 constitution, according to Njoroge’s book.

Claim 8: A bill to create a debt regulatory institution has been pending in parliament for nearly a year

Mudavadi promised to create “a debt regulatory institution within one year of the Amani National Congress government”. He said a legislator in his party, Sakwa Bunyasi, had tabled a bill to address the issue but for “nearly one year that bill is being taken in circles because people don't want us to establish the truth of our debt”.

Bunyasi has sponsored the Public Debt Management Authority Bill, 2020 which seeks to set up “an independent body to manage the public debt”. The lawmaker wants the proposed authority to take over the mandate of the public debt management office currently under the national treasury.

Michael Sialai, the clerk of the national assembly, told Africa Check the bill was submitted to the finance and national planning committee.

“It is still under consideration in the committee.

Claim 9: The Auditor General's report for 2019 shows that stalled projects, which we continue to borrow billions to run, run into mind-boggling trillions

The national treasury defines a stalled project as one which “has stopped being implemented for whatever reason or has been receiving inadequate budget allocations which cannot facilitate meaningful progress over the medium term”.

In both, the auditor general said that “the government has continued to incur huge expenditure on projects which had either stalled or had remained incomplete long after their completion dates had elapsed”.

The projects include dams, prisons, courts, water pans and roads. In the financial year 2018/19, KSh8.8 billion in total was spent on stalled projects. In 2019/20, the amount was KSh3.9 billion.

The parliamentary Hansard shows that in June 2021 legislators estimated the cost of stalled projects at KSh9 trillion.

(Note: We have asked the national assembly for the source of this figure and will update this report with the response.)

Though Mudavadi cites the wrong source, there’s publicly available evidence to back up Mudavadi’s claim that billions of shillings are spent on stalled projects, and that these require KSh1.1 trillion to complete. – Grace Gichuhi

The statistics bureau’s most recent economic survey showed that agriculture, specifically the growing of crops, animal production and other support activities, contributed 18.8 percent to Kenya’s GDP in 2019. The provisional estimate for 2020 was 20.4 percent.

Mudavadi’s figure is at least four percentage points off the mark. A percentage point of the current GDP works out to about KSh100 billion. We therefore rate his claim incorrect. – Dancan Bwire

This fact-check is in partnership with Africa Check.

Deras have been praised for their ability to preserve a woman’s dignity and respect.