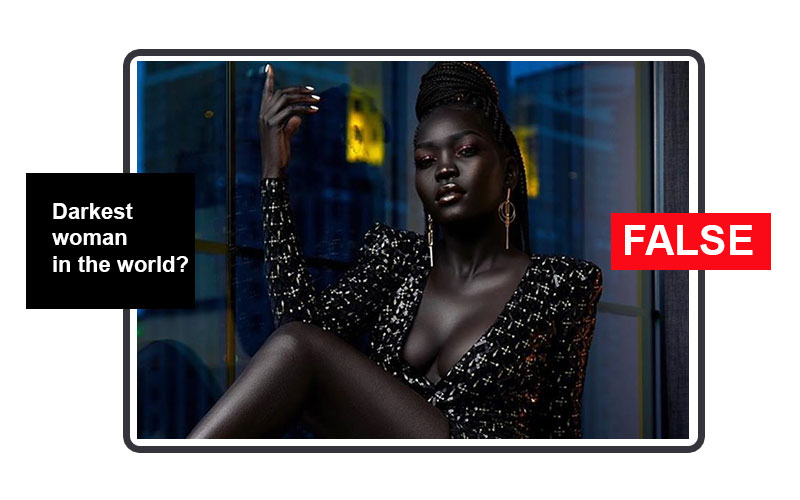 Numerous posts alleging that South Sudan-born model Nyakim Gatwech has been bestowed the 'darkest person on earth' title by the Guinness World Records have been widely shared on social networking platforms and even received coverage on national media in Kenya, Nigeria, Ghana and Turkey.

Ghetto Radio, a popular radio station in Nairobi, shared the claim on its website on April 27.

"South Sudanese Model Nyakim Gatwech has entered the Guinness Book of Records as the world’s most Dark person (sic). Gatwech, 27, has often highlighted how she has been a victim of racism with many people asking her to bleach her skin," the article read.

The claim was widely circulated by hundreds of Facebook users, including by award-winning comedian Loni Love.

In Nigeria, website Legit owned by Genesis Media global, included 'allegedly' to the claim and said the record had not been confirmed, but still congratulated her for the fete.

"Guinness World Records does not monitor records for skin tone," she said in an email.

The Guinness Book of Records is a reference book synonymous with world records both of human achievement and extremes in the natural world.

Started in 1955, it has grown to become the ultimate authority on recording the world’s most amazing accomplishments.

Nyakim Gatwech, aged 27, in a conversation, seen by Standard Fact Check, with one of the Twitter users who shared the claim, denied receiving such a title.

"Hi. Hope all is well. I’m reaching to you and see where exactly did you get the information about the Guinness world record. They didn’t connect (sic) me nor my team," she said.

Gatwech, who describes herself as the queen of the dark, was born in Ethiopia to South Sudanese parents, fled the civil war in the county to Kenya and then moved to the United States when she was 14.

The stunning model says her passion for fashion and modelling was ignited during her stay at a refugee camp in Kenya.

She has modelled for fashion notables, including Calvin Klein, Fashion Nova, Aldo and Cosmopolitan.

What Atwoli, Western leaders discussed with Ruto at State House
National
By Stephanie Wangari
23 mins ago
World Cup official balls need to be charged up before being used in games- here's why
Football
By Standard Sports
26 mins ago
French federation files complaint over disallowed goal
Football
By Associated Press
1 hr ago
President Kagame accuses Tshisekedi of using conflict to delay 2023 polls
Africa
By Betty Njeru
1 hr ago
.

By Stephanie Wangari 23 mins ago
What Atwoli, Western leaders discussed with Ruto at State House