Separating fact from fiction on coronavirus

The deadly coronavirus outbreak – which has so far killed 811 people in China alone, and infected more than 31,774 people around the world – has bred several false claims.

The misinformation pool, largely on social media, is not only alarmist but also overwhelming, and we have had to wade through it alongside billions others.

On January 30, the World Health Organisation (WHO) declared the outbreak a global emergency.

But as the virus spreads, so too do the hoaxes.

The virus claimed its first non-Chinese victim, a US citizen, over the weekend.

Kenya has had seven suspected cases, which have all turned negative.

Health Cabinet Secretary Sicily Kariuki on Friday said her ministry was expecting to receive doctors who had flown out to get training on how to handle the virus.

Ms Kariuki said Mbagathi District Hospital had set aside a 120-bed isolation ward, though the State said it would not evacuate the 91 Kenyan students stuck in China.

Here’s a selection of popular claims debunked by the Standard Fact Check desk.

On January 27, media reports in Ghana claimed a man had tested positive for coronavirus in Cote d’Ivoire. The claim was extensively shared by Kenyans on social media.

According to WHO’s daily update on the outbreak on February 9, however, no African country had a confirmed case of coronavirus.

The suspected Cote d’Ivoire patient, 34, had travelled on a Turkish Airlines flight from Beijing in China to Abidjan with flu-like symptoms.

He was quarantined and treated at Abidjan’s Félix Houphouët Boigny airport, the country’s health ministry said, adding that his condition was satisfactory.

WHO has warned that most African countries lack the capacity to deal with the outbreak, with only two laboratories having the ability to conclusively test specimen for the virus – South Africa and Senegal.

You have probably seen the 14-second clip of a woman eating a bat in its entirety at a high-end restaurant. The viral video, circulated from British newspaper Daily Mail, falsely alleges that coronavirus is linked to contaminated bat soup. While researchers suspect the virus may have originated from animals, it has not been established which species passed it on to humans.

Experts are still investigating meat and seafood from a market in Wuhan, the capital of central China’s Hubei province, which does sell bats and snakes.

However, the first reported coronavirus case in December 2019 has not been conclusively linked to the market.

Virus created by the US?

Some pervasive posts also claim the United States created the virus in 2015, offering a patent as proof.

It is true the US Centres for Disease Control and Prevention (CDC) registered a patent, but it was to contain a different strain of the virus (SARS-CoV) than that which originated in Wuhan.

Another viral but baseless claim suggests that the virus was part of a covert biological weapons programme by China. Numerous fact checks have found this to be false, as no evidence is provided to back the claim.

Does a vaccine already exist?

Despite several reports online that pitch false cures for the fast-spreading global health crisis, there is no vaccine for the 2019 novel coronavirus.

CDC says it can be controlled by avoiding close contact with those carrying it, while WHO recommends regular hand washing, thorough cooking of meat and eggs, and covering your mouth and nose with a tissue when coughing and sneezing to prevent infections.

Experts project that a vaccine that could prevent infections and stop the spread of the disease is still a year away – at a minimum.

Scientists from the National Institutes of Health in Australia and partner companies around the world have identified the genetic sequence of the new coronavirus and are working on vaccine candidates. 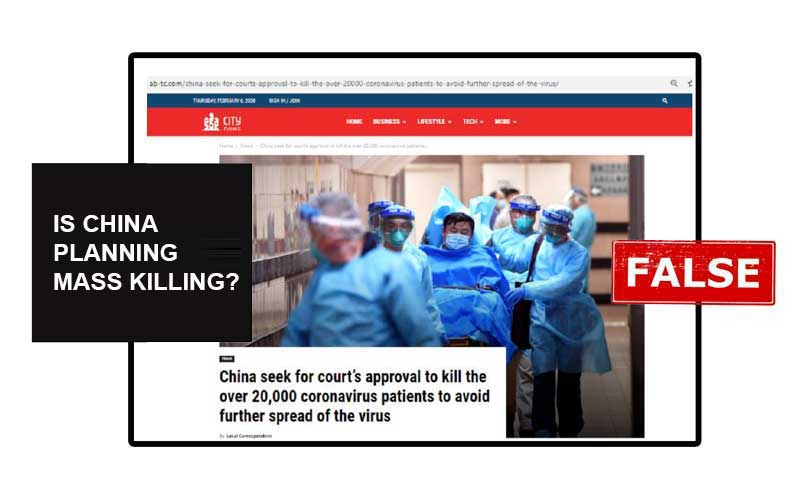 A disputable website on February 5 published an article claiming China had sought a court’s approval to kill more than 20,000 coronavirus patients to avoid further spread of the deadly virus.

Kenyans shared the article widely on social media. The Standard Fact Check Desk, however, has established that the claim is false.

The first red flag on the report is in its first sentence that misspells ‘China’ as ‘Chhina’. Further, the site does not have identified means authenticating its location, or take feedback from readers. And it has been flagged numerous times for fake news, including most recently a report that Singapore had recorded six more coronavirus cases. The government of Singapore released a statement refuting the claims.

Additionally, the official website of China’s Supreme People’s court makes no mention of this appeal.

What authorities in the city of Wuhan have done is order the rounding-up of residents who have been infected with the coronavirus so that they be placed in isolation, quarantine or designated hospitals. There is no mention of a mass killing.

You can read the full fact check if China sought approval to kill 20,000 coronavirus patients HERE.

How to spot the fakes on virus

The sharing of conspiracy theories on coronavirus is at an all-time high. Do your due diligence and evaluate information before you share

Platforms like Facebook and Twitter have resource pages that advice you to be on the lookout for headlines with exclamation points, tampered dates and images. Stick to trusted news sites

Google has also partnered with WHO to enable easier access to safety information. The feature works by displaying relevant news content and localised updates at the top of your browsing page.

When skin cells are produced too fast