You only get married once 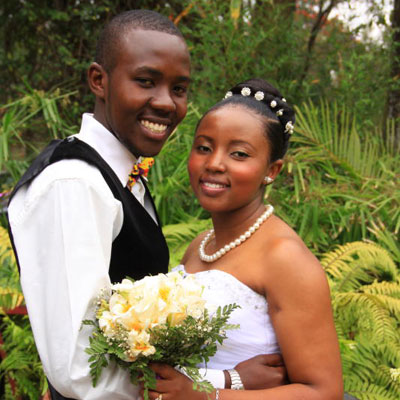 You only get married once

Alfred: We met in campus in 2008 and had been friends since. One day in 2011, Grace bought me lunch. We started dating in April 2012 and we committed ourselves to one day get married.

Grace: It was on a Sunday. Actually, the exact date was January 12, 2014. We went for the first service at Citam Valley Road and after the service at 11 am, Alfred suggested we walk to town and catch up discussing our New Year’s resolution, which I had consented to initially. However, we changed our minds and went for Bible study at 11:30 am. Alfred stepped out after 1 hour to meet his brother who had come to church for the first time since I met him, (I was left thinking to myself that 2014 must be a great year now that his brother had even come to church).

The Bible study was over at around 1 pm and I went to meet his brother. Unfortunately it was very hot and I refused to walk to town. Alfred pleaded and for the very first time, he offered to carry my hand bag, and asked his brother to accompany us.

We got to Serena and we insisted that Alfred buys us lunch as he owed us one. He suggested that we instead follow a 'panya route' that leads to the back side of Serena, (he played us and we naively followed.) We found ourselves at Uhuru Park. He bought us sodas and spotted a seat under some tree...this was something he would never do on a normal day. We started talking about our resolutions for the year, they asked me about my resolution and I shared on how prayerful, committed to church and godly I wanted to be. They laughed and asked me what my physical, financial, emotional resolutions were. I told them I wanted a promotion at work. I asked for their resolutions, Alfred told us he wanted to be a husband and I broke into laughter. I thought he was kidding. He then stood up and said he was for real and asked his brother for the ring, went down on one knee and proposed.

Alfred: Grace was fond of checking what I was carrying in my pocket. I thought of wearing a jacket that day but it was too hot so I opted for me having my bro carry the ring. My idea worked and she had no clue that a proposal was coming.


THE STORY BEHIND THE WEDDING

In September 2013, we settled on the wedding to be in September 2014. I had brought him home to meet my parents in October 2013, (before the proposal) and started serious planning after the proposal. There wasn't much drama with either families, our friends and families were really supportive and we truly thank God for that.

We held a pre-wedding in July. Colleagues, friends and our families supported us. We had an awesome wedding committee that made the pre-wedding and the wedding happen, we are forever grateful.

We paid off the suppliers, we used one major supplier which made it easy for us to follow up. He gave décor, tents and seats, food and cake.

Grace: The dry cleaner burnt my gown and they never communicated that, they however fixed it as we used a recognised cleaner.

Alfred: We found ourselves running up and down at the last minute to get half coats for the grooms men. We had agreed to wear half coats three months earlier but we kept on postponing buying them. At first we did not get what we wanted and almost gave up. Grace helped us get the material with the right colours and I made sure they were ready within a day.

The wedding week was rainy and you know how Nairobi gets with the rains. We simply prayed for sunshine and shock…we woke up to drizzles on Saturday. It however brightened up later in the day. We thank God. We purposed to enjoy the day, we had mad fun.

We'd encourage couples to plan early and involve your friends and family to walk with you. Keep a manageable budget. Don't to get into debt for the sake of a wedding or sell off investments to wed. Pray, pray, pray. Mountains do move. Enjoy the journey and the wedding no matter what, you only get married once. Don't focus so much on the wedding and lose touch with each other. You may differ in your views with the parents but it pays off to still honour them.

We enjoyed the morning photos with the maids, we were so relaxed, and took very many photos that helped us relax and get good photos for the day. It was so emotional when my mother gave her advice before the wedding. Walking down the aisle with my parents and meeting Alfred at the altar was definitely a memorable moment. He was very handsome. The bridal car was a surprise from Alfred. Grace still talks about it till today. Over 700 guests turned up for the wedding and we had planned for 400. The love shown was felt and appreciated. Our colleagues, friends and family members supported us financially. We were actually shocked by how they really gave. The vows, they were quite something.